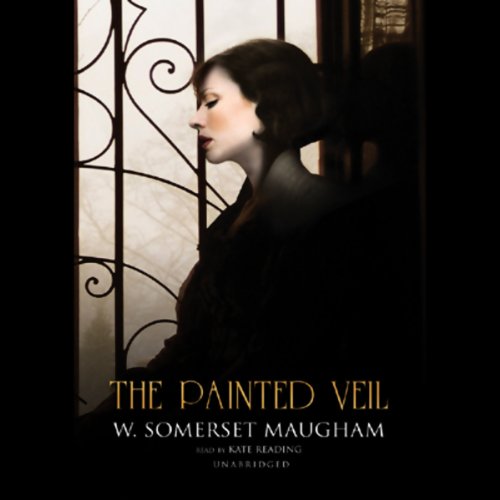 First published in 1925, The Painted Veil is an affirmation of the human capacity to grow, change, and forgive. Set in England and Hong Kong in the 1920s, it is the story of the beautiful but shallow young Kitty Fane. When her husband discovers her adulterous affair, he forces her to accompany him to a remote region of China ravaged by a cholera epidemic.

Stripped of the British society of her youth and overwhelmed by the desolation around her, she is compelled by her awakening conscience to reassess her life. She takes up work with children at a convent, but when her husband dies, she is forced to return to England to her father, her one remaining relative, to raise her unborn child. Though too late for her marriage, she has learned humility, independence, and how to love.

"[Maugham is] the modern writer who has influenced me the most." (George Orwell)
"An expert craftsman....His style is sharp, quick, subdued, casual."(New York Times)
"The Painted Veil, with its sadness, its moral tension, its irony and compassion, its building evocations of lust and terror and remorse, is a work of art." (Spectator)

What An Unexpected Delight!

I generally consider myself an educated person, but somehow got through (many) decades of adult life without reading Maugham. I'm either very lucky to have finally found this writer, or really dumb to have missed him for so long. Either way, I was enchanted by the writing, approved of the narration, and can't seem to get the story out of my mind. There are so many ways to consider the story, the characters, the setting and the atmosphere I can't begin to tell you. I can tell you that even if you don't usually crave "classics" (but maybe have a few favorites as I have like The Great Gatsby and The Old Man and the Sea) you've got to listen to, and consider, The Painted Veil.

The beginning chapters of this book had me expecting a far different type of story than this turned out to be. The metamorphosis of complex characters who can--and sometimes do--make important steps in life was told with such candor and sensitivity that I find myself quite astonished about how it was done. The book was in no sense difficult to understand, yet its messages are quite rigorous and profound. I would highly recommned this novel, author, and excellent reader to anyone who (like myself) hopes someday to think and grow up into an insightful and gracious soul.

I was intreged by the trailer for the recent motion picture and thought of reading the book prior to seeing the movie. It is truly thought provoking and great from start to finish. The reader is a delight. I am now in search of more of Somerset Maugham's works.

"The Painted Veil" is a compelling tale of lust and redemption, a story that begins sordidly and ends profoundly and one that is rich in reality, compassion, and hope. It is a morality tale of astonishing depth and humanity. Beautifully written and entertainingly read, it it is well worth listening to more than once.

Maugham's story is dated but no doubt true to its time, and for that reason sad and believable. His sympathy for the dull and restricted lives that many women were expected to endure is tempered by his disgust at the superficiality, racism and timidity of the British upper classes. This tale is a true social and political portrait of an era, and as creepily modern as it is time-worn.

Wonderful story teller. Maugham had insight and compassion for the human condition of his time. In this story most particularly he offers understanding about the societal bondage of women and he writes with surprising sympathy of Kitty's "awakening" to her true powers as a female in a wholly male dominated world. She purposefully has not been very educated, is not talented in any particular way, has not been nurtured to think well of herself, except as a pretty, marriageable female. Even in that she has been made to feel she is lacking. An older man becomes besotted with her and convinces her to marry him, aided by the pressure of Kitty's younger sister marrying leaving Kitty open to becoming that most derided female--a spinster. She is seduced by another man, a vain and selfish aging Lothario. When Kitty is revealed as imperfect, her husband threatens and punishes her emotionally and puts her in harm's way. Despite her husband's cruel vindictiveness and her lover's betrayal Kitty matures, learns her own worth and moves on. Kate Reading did a superb job narrating. Lovely story.

I've heard W. Somerset Maugham raved about by literati, but never read any of his works before. This short novel - which is very much a work of its time, and not the worse for it - happens to hit one of my favorite themes, being a redemption story for a character who starts out thoroughly unlikable and with few redeeming qualities.

Kitty Fane is a shallow, materialistic daughter of a shallow, materialistic mother who henpecked Kitty's father, always seeking to improve their lot in life, and when that failed, pushed Kitty and her more fortunate younger sister into marrying well. Unfortunately, Kitty was young and vain and stubborn and turned down the many proposals she received, no one meeting her standards, until suddenly she was past her shelf life at the ripe old age of 25. Well, be fair, this was the early 20th century marriage market in British society.

So Kitty winds up marrying a bacteriologist, a decent, boring, unexceptional man who adores her, and who she finds barely tolerable. When the two of them go off to Hong Kong, she escapes the tedium of her marriage by falling victim (a very willing victim, as she admits herself) to the seductions of the local lothario. When her husband finds out, he forces her to come with him to a city in rural China that's being ravaged by cholera.

The story is a simple tragic tale of adultery and redemption. But Maugham truly excels in detailing the inner workings of his characters, and shows us Kitty's thoughts, as she slowly transforms from a selfish, self-centered, rationalizing creature to one who eventually becomes capable of seeing through the eyes of others, and then seeing herself through others' eyes, and then realizing that she is not in fact the center of the universe. And he does it very convincingly - by the end, you are actually able to like Kitty.

Despite the entire story being told through Kitty's POV, the other characters - her husband, her lover, the Mother Superior at the Chinese orphanage, and eventually, Kitty's father - are all described with in such realistic and believable detail that you are thoroughly able to understand them as well - both before and after Kitty is able to do the same.

This was a very nice piece of writing, full of interesting character studies and a story and setting just rich enough to be vivid, just sparse enough not to contain anything unneeded. I will definitely have to listen to more Maugham.

Vain, selfish, puffed up . . . and unable to see beyond the end of her own nose, Kitty Garstan, is pretty and has drawn the attention of plenty of eligible young men . . . but having turned them all down, and now at age 25 and about to pass into spinsterhood according to her mother, she feels pressed to accept the proposal of young bacteriologist, Walter Fane . . . he has fallen quite madly in love with her . . . though his shy, backward ways amuse her . . becoming wife to Dr. Fane at his post in Hong Kong seems a fitting station to Kitty . . . so it is that she accepts Walter's proposal . . . society life as the life of a bacteriologist is not what Kitty had hoped . . . and she soon begins an adulterous affair with the Colonel Charles Townsend, the Assistant Governor of Hong Kong . . . an older fellow, who, like Kitty, suffered much from an over inflated opinion of himself . . . thinking herself to be in love for the first time in her life, Kitty overlooks the obvious . . . i.e., the fact that Charles is happily married, that he spends WAY too much time preening in front of the mirror, and that his WIFE is the one with the brains in the family . . . and suave Charles feeds Kitty's ego, like candy to a baby . . . with all the "I love you's" and "I will never let you down"s until one could upchuck at the sheer idiocy of it . . . and low and behold, poor naive Walter . . . who has loved his wife with a never ending love, expecting nothing in return . . . well, he isn't the country bumpkin one would have imagined . . .(I do hate that the author did not delve further into Walter's own emotions from this point further, other than to show his bitterness . . . I am going to watch the movie, as other reviewers have noted that the conclusion is different) . . . from the time that Walter confronts Kitty with her cheating and their move to China, the story changes greatly . . . and so do Walter and Kitty . . . the relationship of Kitty with the nuns and children, the work of Walter with the Chinese dying of cholera, the story of Waddington and the Manchu Princess were all wonderful . . . but as Kitty grows and finally realizes the worthlessness of Charles, his shallowness, her own foolishness, and begins to see the kindness of her own husband, she is yet to truly VALUE it . . . to LOVE him . . . to understand the GIFT of him . . . the ending is a hard one . . . brutal . . . but leaves hope for Kitty to yet learn and grow with her father and her child.

I watched the 2006 film version with Ed Norton and Naomi Watts and thoroughly enjoyed the adaptation. Somewhere I read in a review that the adaptation had the familiar Hollywood gloss and the book was somewhat different. Finally, I got a deal at Audible and I dived in.

This was my first Maugham and I enjoyed the period setting of this novel in the colonial Far East. The character of Kitty Garstin, a self-absorbed socialite is a character I despised. The story revolves around her infidelity with a dashing but unscrupulous married diplomat and the luckless husband, Walter. There are some wonderful quotes in this book that makes you read it out twice. They stick in your mind long after the story has died. As Waddington, an alcoholic diplomat says to Kitty,

“Some of us look for the Way in opium and some in God, some of us in whiskey and some in love. It is all the same Way and it leads nowhither.”

In summary, the words within the book are stronger than the story and there lies the strength of Maugham’s writing. There are no characters in this book other than perhaps Waddington, who captures your imagination as a progressive, cohabiting with a noble Chinese woman. The rest are thoroughly rotten in their own way. At the end, you even wonder if Kitty finally does find salvation through her experiences.

This is a good book and I recommend it.

Even better than I remembered.

I had forgotten this book brought forth so many emotions for me. There were parts I didn't remember reading the first time around. I thought it was good then, read for school, now even better as I understand the meaning due to age and (i hope) wisdom.

Kate Reading is one of my favorite narrators. A must listen of a great classic story.