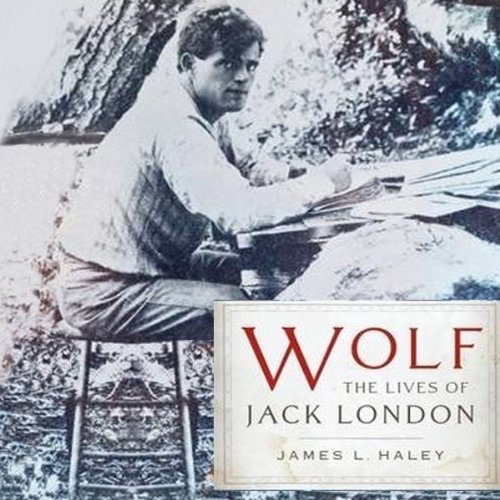 Wolf: The Lives of Jack London

Jack London was born a working-class, fatherless San Franciscan in 1876. In his youth, he was a boundlessly energetic adventurer on the bustling west coast—by and by playing the role of hobo, sailor, and oyster pirate. From his vantage point at the margins of Gilded Age America, he witnessed such iniquity and abuses that he became a life-long socialist and advocate for reform. His adventures in the American wilderness and underworld informed his fiction, and his writing came to captivate the nation as it defined his era. Within his own short lifetime, London became the most popular, and bestselling, author of his generation.

By adulthood he had matured into the iconic American author of such still-universally loved books as The Call of the Wild, White Fang, and Sea Wolf, but in spite of his success, he was at war with himself. The highest-paid writer in America, he was constantly broke. Famous as he was for conjuring the brutality of nature in story after story and novel after novel, upon the actual deaths of his favorite animals he would dissolve into helpless tears. Sick, angry, and disillusioned, after a short, breathless life, he passed away at age forty, but he left behind him a glorious literary legacy.

Award-winning author James L. Haley explores the forgotten Jack London—a man bristling with ideas, whose passion for social justice roared until the day he died. In Wolf, Haley returns Jack London to his proper place in the American pantheon, resurrecting the author of White Fang in his full fire and glory.

©2010 James L. Haley (P)2010 Blackstone Audio, Inc.
Storico Autori
Mostra di più Mostra meno
"[A] valuable London biography. It surpasses Irving Stone’s 1938 Sailor on Horseback, giving us a well-delineated picture of a singular, complicated figure…These days we have little sense of the literary glory that was Jack London. Thanks to James Haley’s zeal, the author of [the fiercely imaginative Before Adam], not just the man of The Call of the Wild, is before us again." ( Wall Street Journal)
"James L. Haley’s sharply focused biography recaptures the breadth of London’s achievements and the intricacies of his personality…We can be grateful to Haley for restoring London to us in all his passionate conviction and flawed humanity." ( Washington Post)
“[A] gripping narrative…Haley understands what longtime scholars of London have often failed to see: that London had multiple lives, and explored his own identities in his fiction." ( San Francisco Chronicle)

Five years with Audible and my first review.

This book is excellent. It is exciting as a novel and I learned a great deal about Jack London.

The best part about this experience was the narration by Bronson Pinchot. His performance brought the book to life. I am only sorry he has a just a few books he has narrated.

Overall, I was very sad for the book to end. What a short but exciting life London lived. He crammed 4 or 5 lives in one short lifetime, and each is brought to life by the author and narrator. Do yourself a favor and get this.

I've waited a while to write this review to sort out why I felt let down. I thought I would get to meet an adventurous larger than life character on the scale of Hemingway. What I got was a rather ordinary, insecure guy who changed his personality to meet his perception of others' expectations in order to fit in, and went to sea and to the Klondike for money, not for adventure. I was disappointed to get through the Klondike period to learn only that it was hard work, inhumanly cold, he got sick and came home broke. His socialist convictions seemed tainted by a desire to get back at the capitalist world for his own poverty as much as for general injustice, and his passion to write was his plan to escape the "Work Beast" world he hated. There didn't seem to be an adventurous spirit in the man - he came across as resigned and cynical. I didn't gain hoped for insights into the inspiration behind "The Sea Wolf" and "Call of the Wild".

So was I disappointed in the book or in the man? I think it's both. In his forward, author Haley states an intent to present the whole man, warts and all, and to avoid the pigeon-holing of previous biographers presenting The Adventurer, The Political Activist, The Drunken Womanizer. In that he succeeded, but I think that by trying to remain steadfastly neutral he ended up writing a work filled with facts but little heart. The facts make it clear that London was a man of many contradictions, but Haley does little to explore and illuminate these contradictions. London never fully came to life for me.

A life of bright flames to ashes...

The biographer and his subject are a superb match, as is the choice of the narrator. I had no idea that Jack London did so much with his life across a spectrum of so many different contexts of bold and varied adventures and daunting personal challenges. I'm equally intrigued how today's world so parallels as to the need for others to take the baton of his "worker passions." Here's content for many fine novels that amazingly was actually compressed into one formidable life.

Wolf The Lives of Jack London

This is a brilliant biography. Haley provides full and thoughful cultural and historical context for his examination of London's life and works. Wolf: The Lives of Jack London gave me a new appreciation of London and his contributions to American life and letters.

Jack London: Beyond The Call of the Wild

My brother recently recommended The Sea Wolf which I could not put down. Knowing nothing about London’s life, I listened to Wolf: The Lives of Jack London. What an extraordinary biography. Thank you Audible!

I found this to be a very complete bio of Jack London. Both of his life and his works

I thoroughly enjoyed learning about Jack London's rich and adventurous life. And although I appreciated the author's attention to detail and his determination to leave absolutely nothing out, I thought his narrative was a bit too redundant; to the point that it was unnecessarily boring at parts. The narrator did an awesome job though!

Thorough biography, thoughtfully written, very well read and a pleasure to consume.
Books like this make me grateful: Thank you!
tj granack

What made the experience of listening to Wolf: The Lives of Jack London the most enjoyable?

The chronology, the history, the writers story, which was such a fantastic adventure in bravery.

What other book might you compare Wolf: The Lives of Jack London to and why?

The history of Robert E. Howard in his Conan series books, just simply Fascinating, as this was!

What a Beautiful and fantastic presence he lends to this work! I just remember him being this silly comedian on that sit com years ago! But he is like a bloody Orson Wells in this narration! Loved it! Keep up the good work Bronson!

First rate! Will listen to it again, and again through out the years! Thank you audible!

Really enjoyed this biography. It had a nice, moving line, which I thought seemed to reflect that life of the man well. Never not-interesting.

The narrator was a good fit for the gritty nature of Jack London, created by his life experiences, and the interwoven thread of sensitivity that any real artist is born with.

I love Jack London's writing so I was fascinated to learn about his life and what inspired his tales of adventure and survival. Needless to say he had much to draw on which is summed up by this quote: "I would rather be a superb meteor, every atom of me in magnificent glow, than a sleepy and permanent planet".

I was intrigued to learn about his desire for a strong male friendship, his views on tramping, and the pivotal role libraries and reading played in saving him from a life of monotonous labour.

The arguments are well balanced and I definitely wamt to read more of his work.

Not enough analysis of his literature. Not enough discussion or description of his alcoholism
- his No.1 defining trait.

It's a great biography about a great writer. Read it! I love it so much.

Jack London was a complex and sometimes contradictory character and this book casts light on many aspects of his personality - London as novelist, political critic and essayist, journalist, hobo, prospector, sailor, husband and father, lover, drinker and adventurer.
While he is mostly remembered these days for his Yukon stories, "Wolf" shows how dedicated London was as a self-taught writer whose output was tremendous: 1000 words per day - a regime he kept up for years. He wrote about 50 books in 16 years - many of them now forgotten.
I found the book very informative and entertaining, although occasionally an overview through time of certain aspects - such as his often destructive drinking - would have been helpful. The narration is good, if sometimes unnecessarily emphasising through voice inflections the humour or irony which is already there in the text. But this is a small criticism.
I would recommend this book to anyone interested in finding out more about the complicated nature of the man at its heart. Jack London comes across as a man of courage and determination who wanted, as he wrote somewhere, to be a comet rather than a dead planet, and not to waste a moment of his life. Often on the edge of things and perhaps not quite as comfortable with himself as he projected, his sheer energy in taking on challenges and driving himself on - even when his health was faltering is well shown in this book.
A lifelong and generous socialist, there is some irony in the fact that his grand project of building a hugely expensive house for himself ended in disaster, but this book is very illuminating.
I was fascinated by London's courageous journey from poverty and very hard times as a youth to fame as one of the world's most popular writers, and by the many twists, turns and shadowed places we find along the way.