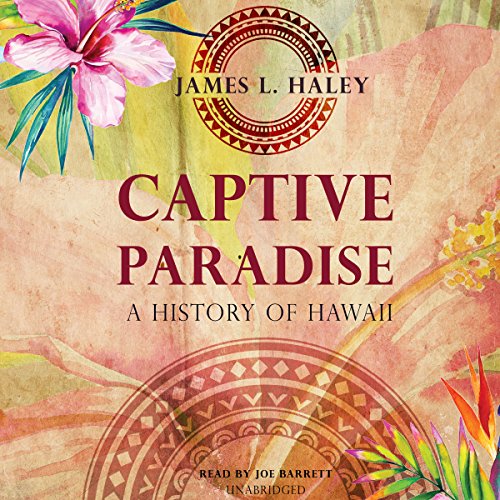 In the tradition of Nathaniel Philbrick and David McCullough comes the first full-scale narrative history of Hawaii, an epic tale of empire, industry, war, and culture.

The most recent state to join the union, Hawaii is the only one to have once been a royal kingdom. After its discovery by Captain Cook in the late 18th century, Hawaii was fought over by European powers determined to take advantage of its position as the crossroads of the Pacific. The arrival of the first missionaries marked the beginning of the struggle between a native culture with its ancient gods, sexual libertinism, and rites of human sacrifice and the rigid values of the Calvinists. While Hawaii's royal rulers adopted Christianity, they also fought to preserve their ancient ways. But the success of the ruthless American sugar barons sealed their fate, and in1893 the American Marines overthrew Liliuokalani, the last queen of Hawaii.

Captive Paradise is the story of King Kamehameha I, the Conqueror, who unified the islands through terror and bloodshed but whose dynasty succumbed to inbreeding; of Gilded Age tycoons like Claus Spreckels, who brilliantly outmaneuvered his competitors; of firebrand Lorrin Thurston, who was determined that Hawaii be ruled by whites; of President McKinley, who presided over the eventual annexation of the islands. Not since James Michener's classic novel Hawaii has there been such a vibrant and compelling portrait of an extraordinary place and its people.

Good, but not enough history of the Island.

All this writer focuses on is the royal family. The beginning is great. A more complete history of the late 1700's.

An in depth look at Hawaiian history from all sides.

Most histories either vilify the white man or explain how the natives got what they deserved. The author does a good job of portraying the major characters as real human beings warts and all. Still, one comes away with tremendous sympathy for the native Hawaiians.

He clearly demonstrates that the native monarchs were just as complicit in commercializing the islands as the sugar barons or sea captains. And they did it with full understanding of the consequences of their actions.

He dispels the myth of the "good old days" by pointing out that in pre-contact Hawaii 9,999 out of 10,000 natives were essentially serfs subject to human sacrifice or capital punishment at the whim of the rulers.

He makes no apologies for the annexation movement condemning it in the harshest terms. But he is also quick to quell historical "what ifs" by pointing out that the next most likely fate for the islands was to become a Japanese protectorate--a bullet dodged.

I enjoyed the performance but I dislike the current trend to perform audiobooks as opposed to reading them. A Scottish character--break out the Highland brogue, a Spaniard--rev up the RRRRRs. I wish they would offer a straight reading along with the performance version of these books.

I would recommend this book to anyone seriously interested in Hawaiian history, but it is detailed so don't expect to get through in on a plane ride to your island vacation.

Great book though narrator is an acquired taste.

Sorry Joe, I know you tried. Got used to it though... Well done story. Great.

understand before you judge

I'd also suggest the book Sea People. Which describes how these incredible Hawaiians found Hawaii in the middle of the giant Pacific Ocean!

Must read prior to visiting Hawaii

Would you consider the audio edition of Captive Paradise to be better than the print version?

Yes, if only for the pronunciation of Hawaiian words

The way it was detailed and composed.

No, I knew of the basic history which is not necessarily a happy story, but the writer did moderate some of the worst parts by telling the context of the actions.

This should enhance any visit to the islands. It is very light on events after about 1900 and has nothing since statehood.

I was hoping for more from this book, but I had some alarm bells when the author writes about his conservative perspective on history in the preface. I tried to avoid it but it was difficult not to read some bias (especially in favor of the Christian missionaries, he also falls into "savage native" tropes too much) in the author's perspective. He also spends a lot of time on trivial things (there's like an hour on the royal school). Overall, it seems like it's a pretty narrow view of Hawaii history. The book is fine for an intro, but I'm looking forward to reading some better options in the future.

A comprehensive & objective history of Hawai'i

objective and fair to all sides, recommend to anyone interested in learning what happened to Hawai'i

You will learn about a people, their culture, and their confrontation with the wider world and the march of "civilization".

Maybe the information presented is true

Well I suspect that most of the information presented in captive Paradise by James Hailey is true, it is hard to imagine that the author intended to be evenhanded in the way he describes Hawaii and its history. His own prejudices come through so loud. He was particularly blind to his judgmentalism of the native Hawaiians’ non-Christian sexual mores. I haven’t a clue what’s missing here and I’m concerned that a lot of the truth is not being told. I do not recommend this book, except to similarly inclined Christian imperialist jingoists.

I took this book in small pieces over the course of a couple of months (drives to work and the occasional half hour in the evening), and thus was able to savor it and let the information sink in more. I appreciate that the narrative on controversial issues seems balanced, giving a fair shake to two opposing viewpoints. I, along with my wife and son, are living on Oahu for a short time, and I wanted to learn more about this beautiful place, and this book helped me to do that.