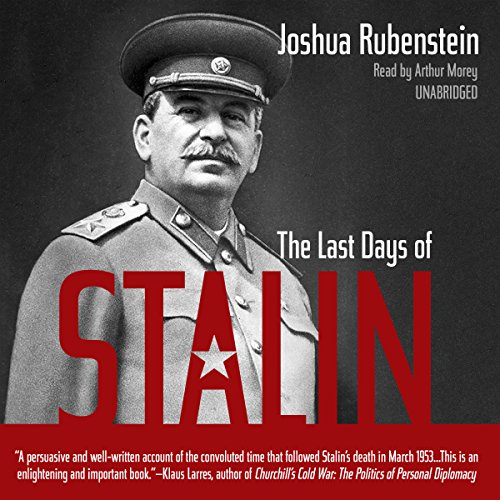 The Last Days of Stalin

A scholarly, absorbing narrative of Stalin's last days and the turbulent wake of his dictatorship.

Joshua Rubenstein's riveting account takes us back to the second half of 1952, when no one could foresee an end to Joseph Stalin's murderous regime. He was poised to challenge the newly elected US president, Dwight Eisenhower, with armed force and was also broadening a vicious campaign against Soviet Jews. Stalin's sudden collapse and death in March 1953 was as dramatic and mysterious as his life. It is no overstatement to say that his passing marked a major turning point in the 20th century.

The Last Days of Stalin is an engaging, briskly told account of the dictator's final active months, the vigil at his deathbed, and the unfolding of Soviet and international events in the months after his death. Rubenstein throws fresh light on the devious plotting of Beria, Malenkov, Khrushchev, and other "comrades-in-arms" who well understood the significance of the dictator's impending death; the witness-documented events of his death as compared to official published versions; Stalin's rumored plans to forcibly exile Soviet Jews; the responses of Eisenhower and Secretary of State Dulles to the Kremlin's conciliatory gestures after Stalin's death; and the momentous repercussions when Stalin's regime of terror was cut short.

The Rise And Fall Of The Soviet Empire

After the attack on our nation’s Capital on January 6th, 2021- I thought this might be of interest.
Our despotic demagogue was demised on January 20, 2021
The QAnon and Proud Boys are bewildered why they were not offered Pardons by their “Leader”
Our DEMOCRACY was put to an ultimate test and teetered on the brink of being destroyed!
GOD BLESS AMERICA AND DEMOCRACY!

JUST A LITTLE TOO DULL

Stalin was an amazing character, evil to the bone but still an incredible person in history. This book I thought would reflect on his life by showing what happened after his death & how political polices & relationships would change after he died. It did do that but it is very dry indeed. One does not expect a thriller, & is well researched but all rather bland. So much about one political says this, then another says that, then someone else puts in their two pennies worth. Even the ongoing division of Berlin was rather dull mainly based around what American politicians were thinking. I kept falling asleep.

Brilliantly researched, gripping account of the circumstances, intrigue and political dynamics in the USSR before, during and after Stalin's death, along with revelations about missed opportunities for diplomacy on the part of E

If you could sum up The Last Days of Stalin in three words, what would they be?

Very interesting and easy to listen to. I love it.

Have you listened to any of Arthur Morey’s other performances before? How does this one compare?

I did not expect to.

I will look for more recordings by Morey and books by Rubenstein.

Not the last days of Stalin

Not focused on the struggle for power after Stalin’s death . About 1/4 of book is about the anti Jewish Doctors Plot unleashed by Stalin . But this event is not directly linked to the power struggle after Stalin’s death. It is just not the book I expected from the title. Cursory about works Geo political power chess, yet also not detailed about internal politburo power struggles.

Filled a gap in my understanding the USSR history and policy. Morey's narration is engaging.

Fascinating study if a short period in history when there was a thaw in US Soviet relations, with superb analysis and wonderfully read

Where is the sixth star?

Books like are critical is individually and humanity collectively.

The author did readers great favor with well researched facts and disinterested analysis. Also, aithoe mentioned and quoted Solzhenitsyn in varied occasions. I am happy that I just finished one of his gulag books recently.

Murray as always is an ace as a reader. Except some pronunciation is questionable

So, this should be a riveting story. How did the author leach all the energy and suspense out of it?

Shows fear and suspicion of the ruling Soviets

In depth look at the events surrounding Stalins death, and how the Soviet union struggled to accept it after 30 years of the Terror! Shows just how the politburo had been under Stalin's control, and had to become devious in order for a successor to emerge where none had been nominated.

A fascinating insight and analysis of a transition in history. Much to think about

Seems a narrpw scope bit expands the topic interestingly, more informative than the recent film on this topic!