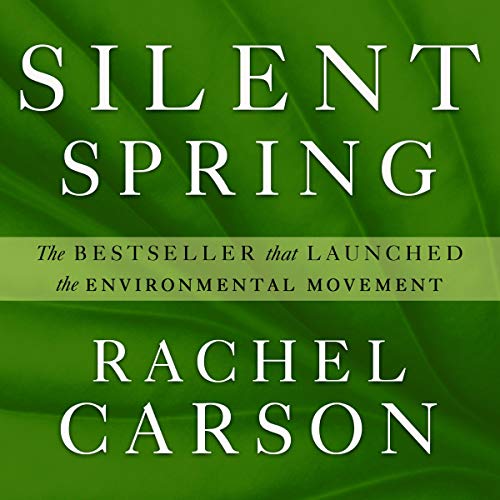 Conservationist Rachel Carson spent over six years documenting the effects on DDT, a synthetic organic compound used as an insecticide, on numerous communities. Her analysis revealed that such powerful, persistent chemical pesticides have been used without a full understanding of the extent of their potential harm to the whole biota, including the damage they've caused to wildlife, birds, bees, agricultural animals, domestic pets, and even humans. In this book, Carson discusses her findings and expresses passionate concern for the future of the planet and all the life inhabiting it, calling on us all to act responsibly, carefully, and as stewards of the living earth. Additionally, she suggests that all democracies and liberal societies must operate in a way that allows individuals and groups to question what their governments have permitted to be put into the environment. An instant best seller that was read by President Kennedy during the summer of 1962, this classic remains one of the best introductions to the complicated and controversial subject.

A wonderful heads up for life.

Having lived thru a number of the events of witch she speakes in ignorance of their effects, I am now mindful of my actions. I am not ruled by fear and fearmongers. Conscious that the earth is covered with ONE biomass, I do not act on my small bit thoughtlessly.

This book is as important today as it was when originally written. The author did a wonderful job communicating scientific examples and the impact chemicals have on the environment, wildlife, and ultimately us.

A must read for all.

This subject is as relevant today as it was when it was first published. Sadly we have not heeded the warnings so passionately and scientifically stated by Ms. Carson. It shoukd make us all think carefully about the use of chemicals in our everyday lives.

It's perfectly sensible how this book could have started the modern environmentalism movement. A must read!

In a world full of chemicals, this piece is still just as revelant as it was when Rachel Carson wrote it. The speaker has a soothing voice and speaks with passion. There wasn't a single chapter that didn't give me goosebumps. I recomend this book to every entomologist, grower, agriculturalist, and chemical company.

"Unless someone like you cares a whole awful lot, nothing is going to get better. It's not." - Dr. Seuss The Lorax

After 2 hardcover readings and listening to this Audible version, I still feel the relevance of Rachel Carson’s writing. Excellent!!

My first read was a student in college in the 60’s. The depth of her knowledge and research efforts are clearly exhibited in her book.

A must read for every citizen to understand the modern experimental paradigm we are living in.

Must read for environmentalists or agriculturists

written in the early sixties and based on research from the 50s, it's now showing its age, however the concepts and issues are the same today as they were then, which is scarily shameful considering we should have had half a century to get it right.
the book is cited as the start of the environmentalist movement and the eye-opening awareness of the issues relating the chemical control of pests, whether plant or animal. a justifiable accolade, even if not quite accurate.
a must read for any new environmentalist or agriculturist.

Finally read this book of our ages. prophetic

written the year before I was born and researched for many years before that, this marvel that motivated the environmental movement is still frighteningly relevant. in 2020, lessons not learnt remain to wreak mayhem.

Very to the point, well articulated and compelling with all the evidence Rachel had in the 50's/60's. Makes you question todays standards and agricultural mindsets. Without this book bringing light, the world would be a very different place.

You have to listen to it set in its time but over 50 years on this is an important book. I had not realised the science and techniques available in the early 60s that are still critical today.

A fascinating look at some biological and other perspectives at a crucial time in modern history. Includes much science, elegant writing and logical thinking which helped trigger an on-going fight against capitalist economic approaches to the maintenance of life. My only criticism would be that there is a fair amount of repitition and the narrator tends towards a seemingly forced tragic style which becomes tiresome and undermines the exceptionally researched science.

Never to late to learn

Wish I had read this book 50 years ago, unfortunately since then not a lot has changed, a must read for anyone interested in our envy.