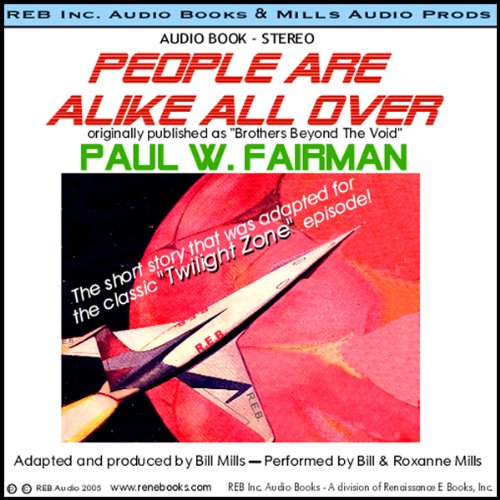 People Are Alike All Over

The story that inspired the famous Twilight Zone episode! "People Are Alike All Over" (which starred Roddy McDowall) became one of the most famous episodes of that classic television series. That memorable script was adapted from veteran science fiction author Paul W. Fairman's story for Fantastic Adventures magazine, where it was published under it's original title "Brothers Beyond the Void". As the original magazine blurb described it, "To Marcusson, the thought that people are the same everywhere was comforting. Until he learned that sameness was the very thing he was fighting against!"

Eerily familiar and similar to the television version, yet hauntingly different and unique, Fairman's story is wonderful by itself. But for media fans, and especially for fans of the The Twilight Zone, it offers a fascinating example of the skills and the art of adapting a story for the screen and offers a textbook case of how Twilight Zone creator Rod Serling altered and refocused good stories to make them work even better for television.

This first ever audio dramatization of "People Are Alike All Over" is prefaced by introductory comments about the author, the story, and the Twilight Zone television show. Enhanced with music and sound effects this REB Audio Book was adapted, produced and performed for this presentation by Bill Mills.

Cosa pensano gli ascoltatori di People Are Alike All Over

If I had paid more, I would be mad. A fifth of it was commentary, a compare & contrast with the television episode.