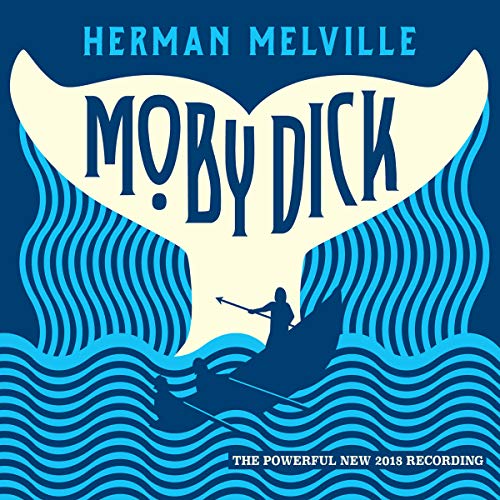 Widely considered one of the great American novels, Herman Melville's masterpiece went largely unread during his lifetime and was out of print at the time of his death in 1891. Called the greatest book about the sea ever written by D.H. Lawrence, Moby Dick features detailed descriptions of whale hunting and whale oil extraction as well as beautiful, incisive writing on race, class, religion, art, and society.

The story, loosely based on a real whaling shipwreck, features the unforgettable, vengeful Captain Ahab, who obsessively hunts a great white whale who bit his leg off below the knee.

The True Voice of Ishmael

I sampled a lot of performances on here before choosing this one. It's absolutely awesome. Cross's natural voice is so fitting for Ishmael, but he also does fantastic voices for every other character in the novel.

Slightly off topic, but I finished this about a month ago, and I've gotten in the habit of listening to it every night when I go to bed. It helps to distract me from my sleeping problems/recurring nightmares. My point is that the narration is so good and the content of the book is so dense and fantastic that I've listened to it every night for a month, and it hasn't gotten old.

Chapter 123. the narration misses from "Make him a prisoner" to Only a fool would try it."

A previous review mentioned that this was the "true voice" of Ishmael, and I'd agree with that - The bulk of the book is narrated in this voice, and that's where Pete Cross shines. It's the voices for other characters in the story that are the problem. For some reason, Cross always does high pitched, goofy voices for them.

Stubb sounds like a cartoon weasel, and Ahab sounds like a hipster on talk-like-a-pirate day. The entire rest of the crew has some sort of silly voice like this, and it heavily detracts from the story. In particular, the majority of their dialogue takes place during important or intense times - whale chases, dealing with Ahab's monomania, etc. Hearing Starbuck say "(Pull, my boys!) Sperm, sperm’s the play!" in a high pitched, whispery voice makes the entire thing sound, well, pervy. Maybe that was his intent, but I doubt it.

Not too long ago I came to chapter 73 - "Stubb and Flask kill a Right Whale; and Then Have a Talk over Him." and groaned out loud. I knew the whole chapter was going to be ruined. And I was right.

I'm well over halfway through, and while I'm thoroughly enjoying the book itself, the narration is a real problem. It can be difficult to convince myself to finish it at times, and I'm almost dreading Ahab's final conflict with the whale, all because of the narration. This recording may be the "true voice" of Ishmael, but it's definitely the "false voice" of Ahab. And Stubb. And Starbuck. And Queequeg. And so on and so on.

P.s. I apologize for the harshness of the review - Pete Cross is quite good about 80% of the time when he's reading for Ishmael and his meditations on life, the universe and everything. It's just these character voices Cross comes up with... they completely clash with the characters themselves and the events happening around them. Without these voices, I'd give his performance 5 stars easily.

Edit: I gave up on this one.

The narration makes the complex language easy to understand. A true classic, Moby Dick is by turns is funny and exciting, and the narrator coveys this beautifully. I chose this as an audiobook as I wasn't sure I would be able to read the whole thing, I am now inspired to get myself a copy.

a very accessible epic. the narration is subtle, enthusiastic and gives the many characters a voice.

The narrator was good but the story droned on. I didn't really enjoy the story. I only bought it to check it off the "books to read before you die list."