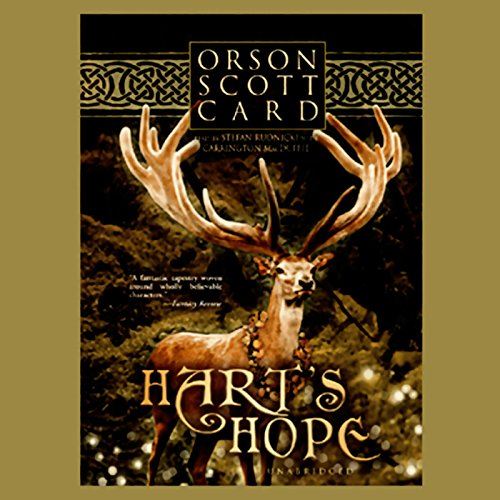 Enter the city of Hart's Hope, ruled by gods both powerful and indifferent, riddled with sorcery and revenge. The city was captured by a rebellious lord, Palicrovol, who overthrew the cruel king, Nasilee, hated by his people.

Palicrovol, too, was cruel, as befitted a king. He took the true mantle of kinghood by forcing Asineth, now Queen by her father's death, to marry him, raping her to consummate the marriage. (But he was not cruel enough to rule.) He let her live after her humiliation; live to bear a daughter; live to return from exile and retake the throne of Hart's Hope.

But she, in turn, sent Palicrovol into exile to breed a son who would, in the name of the God, take back the kingdom from its cruel Queen.

I love Hart's Hope. It's a glory among fantasy. No, it's not clean and pretty and sweet and upbeat, as some people expect after reading some of Card's novels. It is, in fact, dark-dark-dark, and the ending is ambiguous.

But it has one of the most intriguing story constructions you'll ever encounter, and a milieu so unique and deep, you'll never forget it.

I warn you again: This is DARK fantasy. But with lyrical, soaring prose that hypnotizes you from the first word, it's worth reading -- or listening to. Get it. You won't regret it.

This is not an "Ender" universe, (and I loved Ender's universe!). But this is a much different kind of story.

Card is a master storyteller and in this book is he at the top of his game. I do not normally purchase titles in the "fantasy" genre, but I will take whatever this author offers. The story takes many twists and turns. The pace is languid, so be patient. The depth of the characters and the wonderful conclusion will make it worthwhile.

Whoever paired Card with this narrator is a genius. Stephan Rudnicki often performs Card's work, and he breathes real magic into Card's beautiful prose

I am a major Scott Card fan and this is the first time I've been unable to finish. Still beautifully written but I found myself wincing and unable to stay in that space. I did read lots of reviews on Amazon who really enjoy this, but be aware it is a very dark and coarse fairy tale. Still a Card fan but will not finish this.

Thanks for not spelling out the moral of the story

Does power always corrupt? Do horrifying incidents always create horrifying villains? Is a queen evil if she rules with absolute power and torments her tormentors and yet gives a good life to her people? At what point does revenge consume the avenger? At what point is justice served?

Anyway, all these questions are asked and none of them are answered - which is nice because I like to be left to figure out the moral of the story on my own.

The narration is fantastic. And the story itself will keep you listening if only to find out if justice is served. The material is mature and disturbing, however, so be prepared for unpleasant goings-on (i.e. rape, infanticide, torture).

A very dark story that Orson Scott Card tells well as usual. I admire his ability to end a story well and this book certainly is a prime example of that.

One of the greatest works of fiction in history

This is the most unfortunately maligned novel and the recipient of frankly outrageous slander. Perhaps many did not like it, but to assign it a poor rating is unacceptable. If your skin is thin or your vitality low, this book may injure you. It is not for the weak, the foolish, or the dim. And yet of all those who praise it perhaps only a few will receive its gifts. Even its author reputedly dislikes it, yet it is an exquisite treasure I cannot recommend enough. To discuss its content will be to spoil it -- even its themes are a jewel you will need to discover for yourself. So take the risk. Even if you hate it you'll only need to wait 30 days to try again. And it is so worth the risk. By way of caution: Listen carefully, read slowly, and think ponderously. The story can blaze past you without your notice and every second is pregnant with rich meaning. Stefan, under ordinary circumstances, is a phenomenal narrator but if I could fault him in this reading it is simply because of his brisk pace. He would've done well to slow down a mite. 5/5 all around regardless.

story was ok over all I enjoyed it. little bit to dark in one spot

Oldie but a goodie

of OSC's works this one is a touch more allegorical and convoluted than the others. nonetheless, it was a captivating tale, and I really enjoyed it.

I have always loved OSC as an author, once again his imagination and story telling skills have not disappointed, so great.