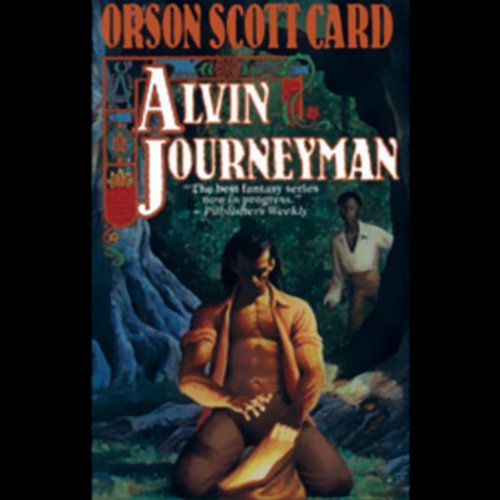 Alvin is a Maker, the first to be born in a century. Now a grown man and a journeyman smith, Alvin has returned to his family in the town of Vigor Church. He will share in their isolation, work as a blacksmith, and try to teach anyone who wishes to learn the knack of being a Maker. For Alvin has had a vision of the Crystal City he will build, and he knows that he cannot build it alone. But he has left behind, in Hatrack River, true friends as well as enemies. And his ancient foe, the Unmaker, whose cruel whispers and deadly plots have threatened Alvin's life at every turn, has found new hands to do his work of destruction.
©1995 Orson Scott Card (P)2007 Blackstone Audio Inc.

"The best fantasy series now in progress." ( Publishers Weekly)
"This superb and welcome book continues the saga at the same high level as before....[The Tales of Alvin Maker] promises to be [Card's] most notable creation." ( Booklist)

I've listened to this book (actually the whole series) multiple times. Card is a great writer and the voices are awesome. The Alvin Maker series is one great series worth listening to over and over.

This series is beyond epic. And EACH book blows me away just a little more than the last. It feels so real in a way that other fantasies dont. Highly recommended.

Is this going anywhere?

There’s so much to love about this series--the depth of the characters, the re-imagining of American history, the tolerance and sympathy the author evokes for slaves and Indians and his insights into the hypocrisy of politics and religion and the almighty arrogance of the hateful white folks. And yet, the love and deep commitment some of characters have for their family. I love the country-fied slang and the characters with all their knacks and hexes. It’s full of magic and truth--seeing past the facades folks present. However, imo, in this installation the author kinda goes off the rails. It’s like he didn’t know how to go forward with Alvin Maker. Alvin already became a journeyman in the last book so it was time for him to go forward and create a new world, but seems like the author didn’t know where to take him, so instead he brings him back to Hatrack River where Alvin gets indicted and thrown into jail and the whole rest of the story is about the c-r-a-z-y trial. I thought the most significant new character was Verity, the lawyer representing Alvin. Verity has his own makery skills. However, I just know I’m not gonna be listening to this one again. The characters in the trial were beyond weird. Maybe in the next installation OSC will pick up the story and go forward. I hope so cuz this series has so much going for it.

Great series, but Orson tends to get long winded

I just finished Journeyman in this undeniably beuatiful series, but at several places in the book I got itchy and irritated. Orson Scott Card tends to weave more and more pious-sounding religious undertones into the story and, at least to my taste, diverges from his narrrative at several very suspenseful places to long-winded, not really interesting explanations, philosophical analyses and what have you. This is not to say you should stop reading the series, just that I often thought: man, get ON with it!
Nevertheless: a story that captures you.

Amazing to the very end.

Absolutely amazing I can't stop listening to these books!! I have already recommended to two there people who are lost in this realm of Alvin Maker

This series has me enthralled!

I have been devouring this series, and this book is an excellent part of the journey where we get to see so many story lines come together. The narration by Blackstone Audio's team is wonderful, and I have come to recognize each character's voice actor so they really do feel like that would be their own. Orson Scott Card is one of my favorite authors, and I think this series is even more captivating than the first of his that captured my imagination, the Ender series.

This is a great set of stories, But I have to say I love little Author, I laughed almost after every comment he made.

A court case with some suspense.

I honestly expected this one to be boring, but it kept me on edge. All the clues and evidence fit together nicely to both cause fear and hope. The romance bit felt ham fisted. yet here I am to.continue the series.

I found this book to be a remarkable and engaging recast of the American Frontier progression across the continent. The mystical fascination of alchemical gifts, 'knacks,' provides some of the actual background that excited the early Mormon movement into a more universal, modern compositon in the Alvin series is an inspiriation for those of us with similar interest if not religious affiliation. A great read years ago and audio revisit now.

The way so many things were tied back together was flawless. Card has a magnificent way of creating personalities and has some true insight into the human psyche.

Bit slow compared to others in series...

Although I enjoyed this book, it did drag considerably in places. There is no big plot structure in this book and quite a bit of it is a continuation of the 'Golden Plough' storyline from the previous book - fine, it's a sequel, but each of the previous books had a distinct story and this worked well. This one seemed a bit sketchy on plot, the only exception being Calvin (the evil younger brother) and his exploits abroad - with Napoleon?! Although a Journeyman, Alvin went absolutely nowhere.

I enjoy all the authors books, and this one did a good enough job, but it is only for his real fans, or those that are determined to finish the series whatever. At the rate the storyline is winding down, by the last book we will be reading about Alvin doing his laundry, completing a crossword and the occasional bathroom break. Jazz it up OSC!!