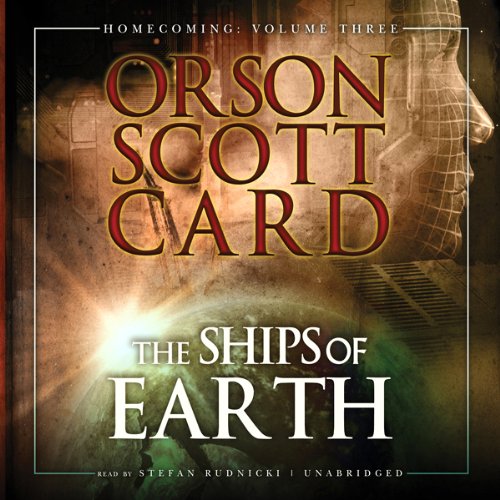 With the continuing failure of the Oversoul, the artificially intelligent guardian computer of the planet Harmony, the human colonists have begun to repeat the devastations of war and conquest wrought on Earth.

To repair itself and avert disaster, the Oversoul has called a group of 16 refugees from the fallen city of Basilica to a hidden, abandoned spaceport where the ancient starships lie. Now Wetchik, Nafai, and all their family must brave the desert wastes and cross the wide continents, guided by the voice of the Oversoul, to await the command to prepare the great interstellar ships for flight again. But among this group, not all have chosen their exile, and the angry resentment of those who were forced to join will make the difficult journey harder.

As with Enders' Game (all eight books), once you're hooked on Ships of Earth, you're hooked. Card develops the characters, builds a lucid plot, and tosses in some surprises along the way. Can't wait for Audible to get the last two books in the series.

At long last the story is getting somewhere

While I do think that book 1 &2 of Orson Scott Card's Homecoming series could've been reduced into one book, Card's third book "The Ships of Earth" is quite excellent. Card has an extraordinary ability to develop characters. The characters in this book lives in limbo. Their world, their traditions and everything dear to them have been shaken by Harmony's master-computer, the Over Soul. Even this story reminds me a lot of the books of Genesis and Exodus in the Bible with themes and even characters that are closely modelled on the Biblical narrative, with one or two interesting twists. I really hope the next book will not disappoint.

And God will bring thee into his presents

This series is very entertaining, especially if you've studied the bible and like SCI-FI. And I love the narrator.

Excellent continuation of the series!

This book is intriguing in terms of its exploration of more of the planet Harmony, its deeper portrayal of the Oversoul, and its long-overdue introduction of both new characters and new technology.

The story here is just as good as books 1 and 2. Card's consistently stellar writing definitely makes this whole series a worthwhile read!

I am interested in the plot of this series but all of the characters are so elementary and childish in their thoughts. It feels as if the author doesn't think his audience is intelligent enough to grasp complex characters and so he over explains intentions and reduces his characters to a single dimension. It reads like a childhood fable.

What a great book in this series

It's a thrilling book in this saga, it has its lows and ups but in general a great great book

Love the story and character development. Really brings home true people and group challengers while telling a great story. Thanks

Narrator is great. Story lacks some action scenes. Even in the action scenes, there is so much focus on the interpersonal interactions that it takes away from the details of the moment. Aside from that, it's a good listen.

I liked the previous books in this series and this one was good enough to finish but the formula was showing a bit.

I was surprised how much I enjoyed this considering I knew this was going to be about a long land crossing. I found the plot engaging and not preachy. There was also a twist for one of the characters that I certainly wasn't expecting; I'm glad Card included it.

There was one repeated sentence, but otherwise, a clear, expressive narration.