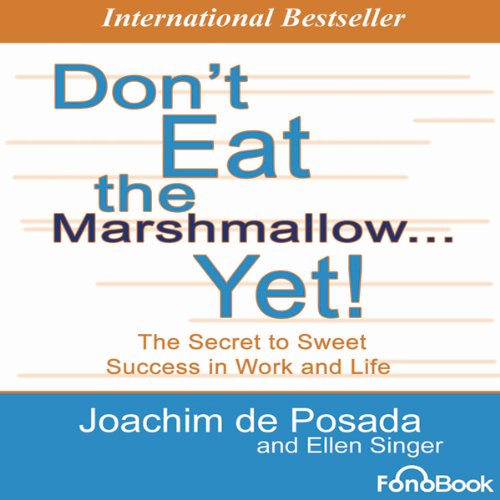 Don't Eat the Marshmallow... Yet!

Arthur is a chauffeur who is intellectually gifted. Jonathan is no less bright than Arthur, equally hard-working, yet a billionaire. So why is Jonathan in the back seat of the limousine and Arthur in the front? What explains the difference between success and failure? Joachim de Posada found the answer in a Stanford University study of children who were able to delay gratification by not eating a marshmallow with the promise of receiving another one if they resisted eating the first for 15 minutes. Ten years later, the children who held out had grown up to be significantly more successful than those who had eaten their marshmallow immediately.

Posada saw the importance of delaying gratification in achieving success. Marshmallow resisters achieve high levels of success while others eat all their marshmallows at once, accumulating debt and dissatisfaction despite their occupations or incomes.

But it doesn't have to be that way. Using a simple parable and real-life examples, this life-changing audiobook shows you how the actions one makes today can pay off greatly tomorrow if you just don't eat the marshmallow...yet!

“Posada is like Tony Robbins, Zig Ziglar, and Norman Vincent Peale all rolled into one." (Ray Pelletier)
"A delightful story that helps drive home important principles for business and life." (Terry L. Brock, President and CEO, Achievement Systems, Inc.)
"The kind of story you can listen and re-listen with new insights every time, if you want to begin changing your life right now, listen to this audiobook." (Marcy Ullom, Vice President, University of Miami)

I didn't expect the entire book to be a parable. I am familiar with the marshmallow study and thought I would be hearing more fact based material (I think there are some real-life examples included within the parable). It was still good, short, and I think you can learn from the examples.

Such A Great Mindset Shift

I love how the principles in this book can be applied not only in terms of finance, but in terms of every area of life as well. Great book that I will recommend to others.

Don't eat the marshmallow yet

i read revirws thinking it would be a good book. i was so wrong! its boring and unrelated to real life!

This book was great! It was very thought provoking and made me think of what marshmallows I'm eating. I am going to make some changes.

was a great book,easy to read and understand.
The narrator was very clear and made listening very lively.
It's a book I will definitely read again.

The content in this book has changed my mindset get the best! The narrator keeps you engaged in the story by not being mono toned when reading.

You need this book in your collection!!!

amazing concept... can be implemented in every aspect of your life... a must listen to it you want to developer your disciplinary skills

Wish I'd understood this simple methodology when I was younger.

I'll be giving copies of the book to all the teens and young adults in my life.

Easy to grasp, quick to get.

Loved the way the story helped you think of all your marshmallow moments outside of just money.