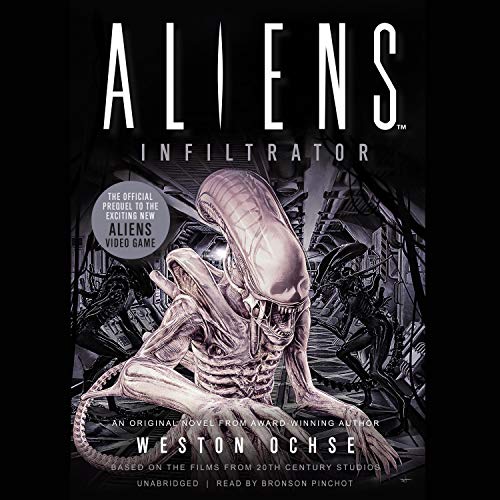 Dr. Timothy Hoenikker arrives on Pala Station, a Weyland-Yutani facility. Lured there by the promise of alien artifacts, instead he finds a warped bureaucracy and staff of misfits testing the effects of Xenomorph bio-materials on living creatures. Unbeknownst to the personnel, however, there is an infiltrator among them whose actions could spell disaster.

Also on staff is Victor Rawlings, a former marine who gathers together other veterans to prepare for the worst. As the personnel receive a delivery of alien eggs, the experiments spin out of control, and only the former Colonial Marines can stand between the humans and certain death.

Bronson Pinchot is- very slowly- getting out of his annoying habit of reading the Alien books like an ASMR artist.

Amazing story! Probably one of the best books in this series. One complaint though… There better be a sequel and it better talk about the end of this book because it was pretty abrupt leaving us all on a cliffhanger.

I love the alien series, but this was just bad. Every characters can't possibly be this stupid.

full of stupid people , and wtf situations. good thing it was free .
.

Great prequel to lead up to Aliens: Fireteam

All and all good story, parts flow together, good addition to the series. read more

Spoilers ahead!
|
|
|
|
I think the latest outpouring of Alien books have been really enjoyable for fans of the creature and the genre. I wasn’t expecting high art or much more than rehashes with some spins, but “The Cold Forge” was an absolute rockstar entry that might very well be the next trilogy, if not movies, then in some format other than books.

It was apparent the way this ends on a cliffhanger, that *something interesting* was definitely happening on the other, unknown parts of the ship(s), but the concept of an albino Alien somehow being…”extra,” by virtue of the “black goo,” had me enthused about how the species might evolve to become even more challenging, and by that extension, even scarier.

“Alien 3” tickled that, but never really hit it out of the park, the same way “Alien: Resurrection” had some really great ideas, but the tone was kind of all over the place (but, it was certainly pretty to look at).

This book holds that kind of frustration for me. I would have given it 4 stars or more, if the albino had a payoff, but it doesn’t, not after building it up with such an intriguing possibility. Of course, the cloaking capability of the other was equally fascinating, but again, neither build up to a payoff where their unique abilities mean anything.

These stories are parables about how humankind thinks it has everything under control, until it doesn’t. They’re also parables about greed. However, one can only keep (ironically) milking the same idea (think: Jaws), before one-upping whatever came before, just pushes them into absurdity, and they lose meaning, credibility, and therefore, the ability to frighten.

Which is why this book and “Aliens: Into Charybdis” (the sequel to “Aliens: “The Cold Forge”), are so frustrating. They’re on the right path, slowly evolving the mythos into something larger and weaving in something new, fresh, and that makes the creature of collective nightmares that much more impossibly frightening.

But instead of going for that brass ring, perhaps the studio heads or whomever really holds the rights to this IP, throttle it from changing too much.

I don’t know if it’s because we’re supposed to anticipate Ridley Scott completing this film series as his magnum opus (he’s not got that much time), or what, but it’s not difficult to figure out what happens with David and the crew of “Alien: Covenant.”

Maybe the sequel to this will redeem it, but that should not be necessary, because there were already 2-3 great ideas here already.

Either wrap that old canon up, or let some new blood come in and complete a new vision of what might frighten us in the cold darkness.

A lack of tension, with generally unlikable characters makes for a overall boring listening experience. Bronson Pinchot is a fine voice to carry the story, and I enjoyed him. Story had some interesting ideas, which I'd like to have seen worked out, but I suspect that whoever holds the authors leash wouldn't want to ruin future cash grabs by committing to any satisfying answers. Also, on a related note, this is a video game tie in, so it feels like that at times. Maybe we'll see someone with passion for the Franchise like Andrew Gaska offer up a better story in the future.

This book is a excellent addition to the alien universe. though shorter then I like I loved it I'd recommend it to any alien or Science fiction fan.

One of the best yet, reader is great, cool story, great characters, i would love more of these

I know the Alien books aren't exactly literary master pieces, but a lot of them are fun and entertaining reads. This is the only one I've actively disliked. The story and characters are beyond generic. The main character is inconsistent and simply unlikeable. The pacing is poor. Worst of all is the dialogue which falls between cheesy and cringey. There's no sense of horror or terror, it all comes off as flat. I will add the narrator did a good job with what he had. Avoid this and grab the cold forge or phalanx instead.

Really enjoyed this one. Just as good as charybdis but kicks off sooner than its predecessor

I really enjoyed the story and another excellent narration by Pinchot, he was excellent with phalanx and didn't disappoint here either.

Further expansion into the Aliens Universe.

I always enjoy venturing into the Aliens Universe with a new story and meeting new characters and Xenomorphs. Weyland Yutani experimenting on Xenomorphs, what could possibly go wrong??? The build up towards it all going inevitably wrong was a little slow but this didn't bother me. A good prequel story before the release of Aliens: Fireteam.

The story leaves it open, this is due to it laying the foundations for a new game. I hope in time, as what happened with Alien isolation, a story based on the game will happen.

Story is fine, worth listening to, the narration is fine but the voices are awful! There are 3 voices
1-space redneck
2-scared cliche soft spoken woman or 3-1940’s movie Frenchman
Sometimes the inflection sounds like the word to text or random generation. It really took away from the enjoyment. If the narrator just used his regular voice I would have been fine with it. Audiobooks are not cheap and I think this is fair criticism. I slogged my way thru it to get the story done but it wasn’t enjoyable.

Better than the last one

I'm pleased this novel decided to focus on the world of Weyland-Yutani again. That greedy, soulless corporation and its needlessly self-serving employees are half of the reason I read these books. And, there's one employee in particular who is a joy to hate.

One of the best Alien stories out there

The characters had so much depth which complimented the rich storyline. Can't wait for the next one.

Better than Charybdis but....

Ok so at least we got Colonial Marines actual Xenomorphs and pulse rifles but unfortunately it’s still off the mark.

The early Audiobook (River of Pain, Sea of Sorrows and The Cold Forge) were Aliens through and through but in this the characters are all over the place and not very likeable (especially the lead Cruz who seemed too inconsistent in his manner and actions), the Xenos don’t act right or are too easily killed, there’s two random mutated monsters going around that everyone keeps forgetting about and there’s no sense of dread or horror.

I honestly don’t know why Authors keep dreaming up new monsters when you’ve got the best ever monster created in the Xenomorph.