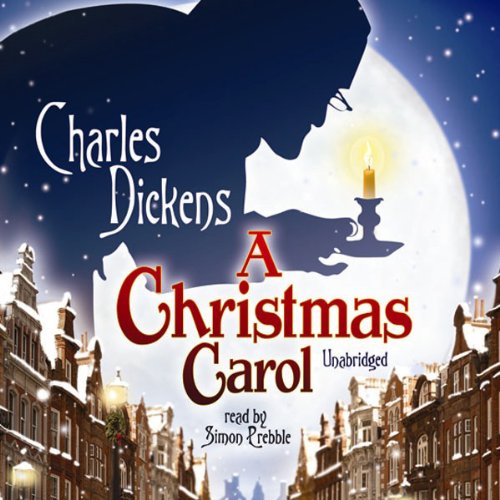 "Every idiot who goes about with 'Merry Christmas' on his lips should be boiled with his own pudding," says Ebenezer Scrooge. Mean old Scrooge despises Christmas until Christmas Eve, when a haunted voice from the past changes his life: overnight! Many know this story but few have experienced the true marvel of the tale.
©2007 Public Domain (P)2007 Blackstone Audio, Inc.

Because I have seen so many movie and theater versions of Charles Dickens' A Christmas Carol (1843), I never felt any need to read it, believing that I knew the story well enough and that anyway it might be too sentimental. But because I like Simon Preble's voice and manner, when I saw his reading of A Christmas Carol in an Audible sale, I decided to give it a try. So imagine my surprise when I found myself moved to tears several times while listening to the audiobook, something that had never happened during my viewing of various adaptations of it.

Dickens' story is sentimental and moralistic--but it is also so full of the joy of life, the understanding of human nature, and the pleasure of imagination and language, that even when Tiny Tim leaning on his wee crutch says "God bless Us, Every One," I do not cringe at being served too much sugar. Additionally, Dickens appreciates the replete dinner table, and my mouth watered over the delicious descriptions of different seasonal foods and drink. At the same time he infuses into his story a terrifying yet reassuring spirituality via ghosts, charity, and love. The idea of visiting like a specter key scenes from your past, present, and future wherein you learn truths about yourself that change your life is compelling. And the flame of Dickens' social conscience flares up during the story.

Simon Preble gives a wonderful reading. He enhances the emotions and personalities of the various characters, bringing them to life--without over-doing it--so that the listening experience is deeply satisfying and moving (even if you already know how it all happily turns out). Preble's voice is seasoned, somewhat scratchy, and full of skill and wit, a perfect medium for Dickens' writing.

Try reading aloud this passage introducing Scrooge to the reader!

Oh! But he was a tight-fisted hand at the grindstone, Scrooge. A squeezing, wrenching, grasping, scraping, clutching, covetous old sinner! Hard and sharp as flint, from which no steel had ever struck out generous fire; secret, and self-contained, and solitary as an oyster. The cold within him froze his old features, nipped his pointed nose, shrivelled his cheek, stiffened his gait; made his eyes red, his thin lips blue; and spoke out shrewdly in his grating voice. A frosty rime was on his head, and on his eyebrows, and his wiry chin. He carried his own low temperature always about with him; he iced his office in the dog-days; and didn't thaw it one degree at Christmas.

Hearing those words, how could you not enjoy Dickens' exuberant conceits about the stingy and frosty Scrooge? How could you imagine that he could ever change? And how, when he does, can it fail to bring satisfied tears of pleasure and conviction to your eyes?

There are many excellent recordings of "A Christmas Carol" on Audible, but after listening and re-listening to them all, I think this is my favorite. (My other two particular favorites are the readings by Anton Lesser and Tim Curry.) This is not only one of the best performances of the story I've heard, it's one of the best performances I've heard from Simon Prebble. He perfectly captures the spirit of the story (not to mention the spirits). Each character has a clearly distinctive voice, and he manages Scrooge's transition from bitter miser to giddy convert with ease. There are so many different moods to convey in this nearly-perfect story: sadness at loss, anger at social injustice, amazement at wonders, boisterous high spirits at Fezziwig's establishment and nephew Fred's house and finally in Scrooge's heart. Simon Prebble nails them all.

Prebble is one of the best!

I am an avid audiobook listener and I have to say Simon Prebble is one of the best storytellers I have heard yet. He does the voices perfectly, without sounding corny, irritating or melodramatic (as is all too often the case). His narrator's voice is very pleasant and soothing to listen to. HIGHLY recommended.

Charles Dickens' works are always great reads. The narration on this audiobook was very well done and I highly recommend the narrator.

I think this is the best Christmas story ever! The narrator is perfect. I never get tired of listening to this.

I have listened to many different audible versions of this story and this one is the best. While listening to it I am reminded of the movie version from 1951 starring Alastair Sim as Scrooge (Which by the way is the best movie version of A Christmas Carol).

What a great version of this holiday classic! A great performance of one of Dickens most popular stories.

brought me to tears

I hve never read the unabridged vervions and it was poetic and moving, especially during Christmas Eve Eve.

I love this story and never tire of listening to it. Still contemporary in its message.

I only know the story from movies. The original is stunning in the writing, made even better by a wonderful narrator. It's not long, do yourself a favor and listen.

Tried several versions - this was the best

Would you listen to A Christmas Carol [Blackstone Version] again? Why?

Yes - I will probably be forced to as it's part of the new Eduqas GCSE English spec.

It's a brilliant timeless classic

Have you listened to any of Simon Prebble’s other performances? How does this one compare?

No but this was superb. I had bought two other versions - one was so deep no one could understand it and the other they had "amended" the text. This one is perfect.

No, but you could do.

The kids do seem to like this one. They are better able to follow it and have stopped whinging about the voice, so winners all round!

Dickens was written to be read aloud. This classic Christmas tale is brought to life by the narrator, who adds colour to the words. I thoroughly enjoyed a tale narrated that I have read many times before. I would highly recommend this version.

Irresistible listening at this time of year.

Pop the tree lights on, make a hot chocolate and get cosy on the couch. Then enjoy this classic.

With a lot of travelling to do over the holiday period, I thought this might help to get me into the mood and pass the time spent on airplanes. Not only was this a good choice, but it rediscovered a classic in its original format. As a story that has been rewritten and adapte so many times for media, it was a true pleasure to hear it as Dickens intended.

What other book might you compare A Christmas Carol [Blackstone Version] to, and why?

As with all Dickens' work, it is the writing of a master craftsman that weaves a festive masterpiece.

Simon Prebble held my attention and narrated with sympathy for the narrative.

It made me fell very happy, festive, and determined to be more benevolent in future!

You may think that you know the story, because you have seen a film or play, but go back and rediscover it and you will uncover a gem.

Great narration of this classic. Leaves you feeling exuberant and very festive! The narrator's voice and pitch is perfect.

Truly a joy to listen. Will listen to it again and again in years to come...

An inspiring Christmas take that has an element of truth that we should all translate and place into our own lives over the festive period, spreading joy and loving those closest to us!

Studying Great Expectations for my A-levels really set me against Dickens, but I thoroughly enjoyed this. It's fun, Cbristmassy and not the worst, dense, monstrosity I expected from Dickens!

this book was worth every penny . will listen again next year. well read . great story.

Incredible story with an incredible narrator