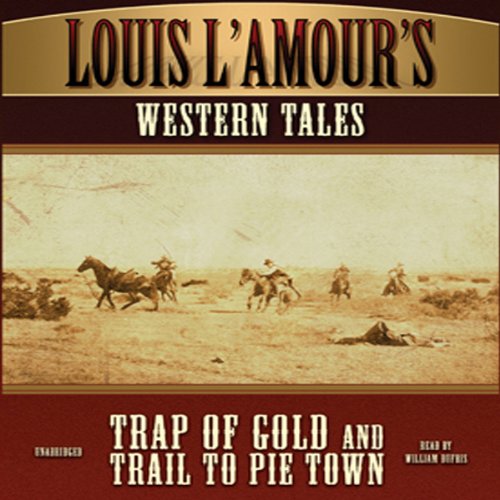 'Trap of Gold' and 'Trail to Pie Town'

Here are two exciting adventures from the pen of Louis L'Amour.

In "Trap of Gold", Wetherton has been three months out of town when he finds his first "color", in a crumbling granite upthrust with a vein of quartz that is literally laced with gold! The problem is that the rocks are unstable, and taking out the quartz might just bring the whole thing tumbling down.

In "Trail to Pie Town", Dusty Barron has ridden his stallion at full gallop out of town, leaving behind him a man bleeding on the floor of a saloon. Maybe he could have explained himself, if two other men hadn't appeared and gone for their guns when they saw him. So Dusty took off. But the dead man had relatives in the area, and now it looks like he is going to be facing a clan war.

I love Louis L'Amour books, and can't believe he wrote "Trap of Gold"... there was nothing to it. "Trail to Pie Town" wasn't bad, but would have been better with another narrator.

Overall 4 Star rating is for "Trail to Pie Town".

the book cover lift up short stories in backwards order. Book 1 is a great short story and I highly suggest you read the full story which is a full book before you read buck one.

chapter 2 or book 2 which is this first short story listed on the book cover ironically, is not a very good short story.

Into the lion's den!

Trail to Pie Town
Into the lion’s den!
Dusty Barrin was barely ahead of the Hickmans, leaving Dan Hickman dead in the saloon in Harrea. There were nine Hickmans, Madis, and three Fisk boys in Harrea. Dusty’s clan was back in the hills, southwest of Harrea. Time to make tracks. Dusty headed for the Alkali Basin, they wouldn’t expect that. Trying to make peace in Harrea was a good idea but now the feud would be on fire. Dusty headed for Gallow Gap. Remarkably, he came across a young girl and boy traveling in a wagon. Gallow Gap was like paradise after the basin, and there they settled. The girl’s father was dead but purchased a partnership with a hombre named Dick Lowe before heading west. Dusty took the agreement and rode into Pie Town to see what was what. Dusty’s welcome was not very friendly…
Trap of Gold
Irresistible!
Weatherton was a prospector. Searching the base of the mountain, finding an alluvial fan of debris that showed some color. Working up the fan he found a large vein of quartz cobwebbed with gold. The upheaval of granite was very unstable, any disturbance could bring the whole structure down, burying the gold vein under tons of rock. He sat staring at the granite monolith, contemplating how to remove the gold. Slowly he cut into the base of the quartz. Day after day he cut deeper, the vein getting richer as he went. The danger and anticipation got ahold of him, finding it irresistible. He knew he should quit…

my grandma new what was good

After finding a soft back book from Louis L’Amour after my grandfather passed away. I remembered him of all things utilizing the time on the commode remembering a laugh
But he was absolutely right every minute counts utilize it after becoming paralyzed and diabetic reading has been coming difficult process and using Audible has proved to be quite educating! All of these books have been great this happens to be the very first novel that I had experienced from this author enjoy

I don't yet speak Spanish. The narrator has such a heavy accent I cannot understand her instructions.

While I enjoyed both, The Trap of Gold, shortest of the two, will probably stick with me the longest due to the suspense aspect. Mr. Dufris did an exceptional job communicating that one!

The second story called Trap of Gold is a dramatic and tense story demonstrating the skill of L’Amour as a writer.

Back to my Roots

If you could sum up 'Trap of Gold' and 'Trail to Pie Town' in three words, what would they be?

The narration was great, and the story line made you feel like you where there or wanted to be!

It was a true western

What does William Dufris bring to the story that you wouldn’t experience if you just read the book?

If you could rename 'Trap of Gold' and 'Trail to Pie Town', what would you call it?