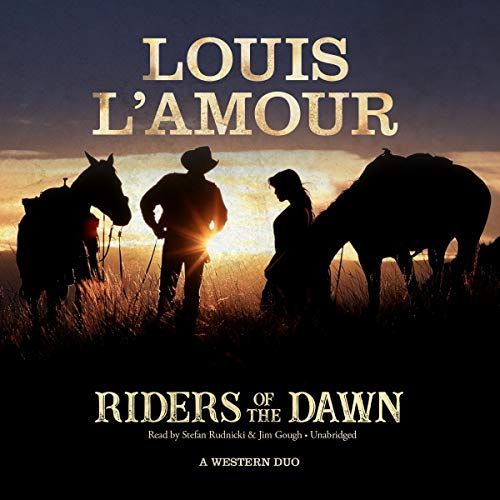 Riders of the Dawn

Matt Sabre is a young and experienced gunfighter - but not a trouble seeker. But when Billy Curtin calls him a liar and goes for his gun, Matt has no choice but to draw and fire. To his surprise, the dying man gives him $5,000 and begs him to take the money to his wife, who is alone in defending the family ranch in the Mogollons. A combination of guilt, regret, and wanting to do the right thing leads Sabre to make that ride.

"Riders of the Dawn"

A young gunslinger is changed for the better by meeting a beautiful woman. A classic range-war Western, this novel features that powerful, romantic, strangely compelling vision of the American West for which L'Amour's fiction is known. In the author's words, "It was a land where nothing was small, nothing was simple. Everything, the lives of men and the stories they told, ran to extremes."

This story is one of Louis L'Amour's early creations that have long been a source of speculation and curiosity among his fans. Early in his career, L'Amour wrote a number of novel-length stories for the pulps. Long after they were out of print, the characters of these early stories still haunted him. It was by revising and expanding these stories that L'Amour would create his first novels.

know before you buy

loved this book, however, note here are two books in this with two different narrarators. both stories are about Matt Sabre, the first story is short and decent. the second is much longer and more fun.

The narrator of the second story didn't sound natural. His accent seemed fake, as if he was trying to sound western. He also did not maintain a clear difference between character voices.

I enjoy all of the Louis Lamour audios. This one didn't dissapoint. There was alot of action and suspense throughout both stories

This book was actually two books in one, both were excellent stories. The second and longest one had the best narrator I have ever heard for westerns, he greatly enhanced the experience.

Both stories were excellent, but I enjoyed the second one best. The reader of the first one was too precise for a western novel, but the story was great. Jim Gough, the reader of the second story, was more authentic. He sounded like a westerner. I can’t get enough of his voice. One of my favorite western readers of all time. And the second story was just downright fun and often funny. The whole book was as good as just about anything L’Amour has written.

Another great L'Amour story read in a way to keep your attention. Worth your time.

1st story much better than second.
2nd reader not as good as first. Also stories conflict with each other. Same name but tow completely different character.

i dont know what idiot put this together, but these "two stories" are actually separate halves of two different books. the first story is the first half of one story, and the second story is the second half of a completely different story. i do not recommend listening to this.

The second novella was marred by cheesy narration and a grotesquely dated "romantic" subplot. The first one was fun.

the second book is elite !