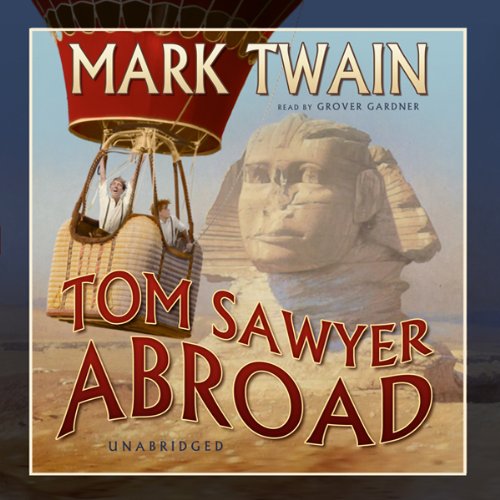 Tom and Huck have both ranged the length of the Mississippi, but, as Huck declares, "Do you reckon Tom Sawyer was satisfied after all them adventures?....No, he wasn't. It only just pisoned him for more." So the two boys head off to see the unveiling of a futuristic airship - only to be kidnapped by its mad inventor! But when the inventor goes overboard in a storm, it's up to Tom and Huck to take control of the airship as it heads out over the seething ocean toward the unknown. Yonder they will encounter robbers, lions, Bedouins, and the perils of the Sahara in their very own Arabian adventure.

Such a funny story!
Tom Sawyer and I would be great friends. Adventurous Spirit and American Literature FTW,

I have really enjoyed the Tom Swayer and Huck Finn stories. Highly recommend and great narrator!

This holds up as great short, save for a drive of 3 hours and it will feel like you get where you are going too soon just like Tom Huck and Jim. My whole family loved it!

We may even listen again on the wayhome.

Growing up I had no idea that there was another book in this series.. I'm so glad that I found it even though it took me a it took me until I was in my sixties to read. I highly recommend it send it to young and old.

I liked this book because it offered a new perspective on the beloved Mark Twain classic. It was great and I highly recommend it.

4th and it shows

It is absolutely the weakest of the huckleberry Tom Sawyer story series. However it is still Twain's work.

Mark Twain at his worst

The reader was great! Sadly, I tried to read this book as a boy and now 30 years later I listen to it again, and find it is as boring, tedious, and unbelievable now as it was then.

Felt a lot like milking the success of the series

I liked the first two books in the series. This one felt a lot more like Mr. Twain had no idea about what he was talking. Includes a lot of unfounded stereotypes about the African continent.