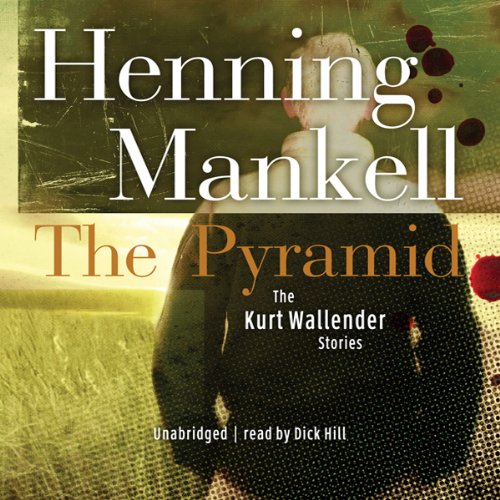 The Pyramid is the long-awaited addition to Henning Mankell's critically celebrated and internationally best-selling Kurt Wallander mystery series - a book of five short mysteries that takes us back to the beginning. Here are the stories that trace, chronologically, Wallander's growth from a rookie cop into a young father and then a middle-aged divorcé, illuminating how Wallander became a first-rate detective and highlighting new facets of a now canonical character.

"Like the Wallander novels, these stories rank among the finest police procedurals being written today." ( Publishers Weekly)

I really liked these stories. I agree with the other reviewers who have noted that they provide the early history of Kurt Wallander. The story called "The Pyramid" is extraordinary. It reminded me of Fellini with the some of the images: his difficult and eccentric father and the latter's trip to Egypt necessitating Wallender to travel there to get him out of jail. Hard to explain unless you've read it, which I encourage you to do.

I get a little nervous when a collection of stories/novellas comes out from a novelist...especially if protaganist is a major character in said novelist's body of work. Usually. I worry that the stories will be froth, light entertainment. No worries with Mankell, these mysteries are just that, not short stories, they add to the already multi-dimensionality that is Kurt Wallandar, they provide background and depth. A great "listen" for the Wallandar fan...I know Mankell says he's done with the series but this is one case where I welcome prequels, sequels, intermidials...whatever I can get!

Did not want to stop listening!

A sure sign of a good audiobook is one that you do not want to stop listening to. This is the first Wallander audio for me but not the last. I already have bought more, having enjoyed this one so much. It is a good mystery with interesting characters and a plot that satisfies. What else do you want....oh, the narration is quite good also. Unlike some mysteries and thrillers, the plots in these four stories are actually believable...the characters seem like real people and the events are quite possible....no out-of-this world action....just a good story.

Five different cases over the years for Wallander

I chose this because it seemed to be among the most highly rated of the author's books. I am not sure whether these stories were written throughout Mankell's career and are being collected here, or whether they were written specifically for this volume - my guess, given how the style improves and the sophistication increases, is the former. The book presents 5 stories of varying lengths, closing with the novella-sized title piece. It shows Detective Kurt Wallender at various stages of his life and sketches the development (and collapse) of his marriage to Mona, although this is never the focus of the narrative. This appears to be part of Mankell's technique - he shows us the ordinary, and often difficult, relationship issues in his detective's life, and goes back and forth between them and the extra-ordinary criminal cases he is confronted with.

The first story is not one of his best, and it seems to show both Mankell and Wallender early in their development, as the 20-something sleuth, a recent addition to the police force, begins going his own way by pursuing an unauthorized investigation into the mysterious murder of an uncommunicative neighbor. The second story is more of a vignette than a detective story, and brings in the issue of immigration to Sweden. "The Man on the Beach" takes a look at the unexpected disappearance of an ordinary man as he goes to pay a mysterious visit to someone. This seems to be a recurring circumstance in Mankell's fiction - a seemingly normal, colorless individual is shown to be unexpectedly involved in something criminal or in some way twisted. This occurs in "The Death 'of a Photographer", a more involved piece in which a comfortable, married town photographer is found murdered one evening while engaging in his favorite hobby - making weirdly distorted prints of famous people and others. Like the previous story, this also has a "pull the string" structure - as Wallander begins to investigate the victim's life he begins to discover unusual things which lead to an eventual solution.

The title piece is the most complicated and interesting. An unmarked, unreported small plane crashes in the Swedish countryside. Shortly afterwards, a couple of spinster sisters are found murdered in their sewing shop. While Wallander begins looking into these two seemingly unrelated cases, he must struggle with his increasingly erratic and impulsive artist father. The old man spontaneously goes to visit Egypt and ends up in custody there after trying to climb up one of the pyramids.

Mankell appears to be very popular. I would not call myself a fan, but I do enjoy his stories and respect his work. The writing can be plodding at times, and it is hard to get a good grip on Kurt Wallander's character (which is often the case with fictional detectives). He is practical, undemonstrative, persistent, low key, and relies on his gut feelings. In his personal life he usually seems to be reacting to someone with more emotions and more personality than he has (i.e. his father, his wife, his daughter). This was a good collection of tales, and I am sure his many fans will like it. I listened to an audio version of the book, which was read by an actor who indulged in some odd voice modulations, thus making things stranger than another presenter would have made them, and who sounded a bit like Willem Dafoe.

This is a great collection of stories. I was a little put off by the short story setup, but it works really well. I thought it started a bit slow with his first case but once ensconced in the mystery, I was hooked.

Where does The Pyramid and Four Other Kurt Wallander Mysteries rank among all the audiobooks you’ve listened to so far?

This is wonderful! How often do you find a character you admire and want to read everything about, but always wonder how his life and career began. Henning Mankell has given us a gift by telling us of Wallander's early years as a sort of bumbling beginning peace officer until his maturity into a lead detective.

I believe this book was written after he wrote what he claims will be his last book about Wallander. I certainly hope he will change his mind because this is an unforgettable character and I certainly want more...and more.

Enough is Too Much

My M.O. is to find a new (to me) author, then read all their books in chronological order. I get to witness their maturing as an author and in the case of character-based series like this, I can assess their growth as regards creative abilities.
I have had it with Mankell and Wallander. The protagonist starts as and remains an asocial depressive that trudges drearily through his miserable life, surrounded by melba toast character solving implausible crime line stories.
The few interesting folks that occur, he kills off almost immediately. These are dark, dark stories set in a dark cold world spun in a dreary, repetitive style.
i am astonished Mankell is as well known as he apparently is. These books leave me nearly suicidal.

Good title story; the others are OK

If you like the series, you'll like these five novellas that take place before the first book in the series — but probably just like them. You finally learn the full story of Detective Wallander getting stabbed as a young cop. The title story is memorable; the others not so much. And why Kurt and Mona ever married, I'll never understand. Bechdel test: Fail. Grade: B

These stories provide a background to the character of Kurt Wallander, some were good but others only mediocre. The narration nearly drove me to shut off the story several times. It was slow, overly dramatic, and the "voices" seemed poorly matched to the characters.

the pyramid and four other kurt wallender mysterie

I like walllender but was bored at times with these even though i still listened to all of it . look forward to reading a full length wallender to see if better.