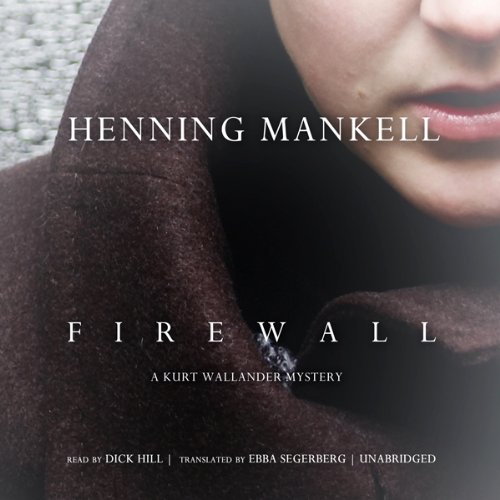 A body is found at an ATM, the apparent victim a of heart attack. Then, two teenage girls are arrested for the brutal murder of a cab driver. The girls confess to the crime, showing no remorse whatsoever. Two open-and-shut cases.

At first these two incidents seem to have nothing in common, but as Wallander delves deeper into the mystery of why the girls murdered the cab driver, he begins to unravel a plot much more complicated than he initially suspected. The two cases become one and lead to a conspiracy that stretches far beyond the borders of Sweden.

"In the sixth Kurt Wallander book to appear in English, Mankell proves once again that spending time with a glum police inspector in chilly Sweden can be quite thrilling." ( Publishers Weekly)
"Well-paced...a thinking man's thriller." ( New York Times Book Review)

Good but not my favorite

I am a big fan of Henning Mankell. I liked this story but it was not my favorite of his. The story is a typical Mankell crime story with seeming disparate events that are tied up in the end. The cast of characters continue to be well developed but for some reason I felt like the story was less cohesive than some of his others have been. I will continue to listen to his stories though and would encourage others to give him a try if they haven't already.

Weakest of the series

Stieg Larsson said this detective series influenced him on “The Girl With the Dragon Tattoo.” The book has got computer hacking and rape revenge, plus a fair amount of social commentary about world financial markets, so you can see the connections. But this is the weakest of the eight Detective Wallender books I’ve read, in my opinion. Lots of interesting ideas but they just don’t hang together very well. Plus there’s one obvious twist Wallender never should've fallen for. Bechdel test: fail. Grade: B

I have one Walkabder left- and am already feeling a loss. But Firewall more than met
my expectations-- tense, moving, worrisome, and- rewarding-- this is Mankell at his best,
and I have learned to love not only the author and the stories-- but-- the narrator-
This was an outstanding listen- WAB

The story is worth the price of admission, even with the poor performance of the reader. A middle aged detective at the peak of his career comes off more like a tired, 65 year old police officer with Dick Hill's narration.

Nevertheless, the plot is fast paced and the story is riveting.

Not one of his best books

I've read 6 of Mankell's books, I'm a big fan, but this story was disappointing. Meandered all over and tried to tie up loose ends by describing what happened and why in the last chapter. His books are usually much better than this.

A mystery wrapped in an enigma...

Detective Kurt Wallander is no super sleuth/hero....he is very believable as a careful investigator who has intuitive good sense and proceeds methodically to solve two murders that are strange and bewildering.

For those of you who have read Wallander books previously, as I have, this is one of the best that I have read.

Dick Hill does an excellent job, as always he does, reading/performing the book.

Dreadfully dragged out and dull

Mankell grossly failed to impress. The story falls flat. The overall plot dull. A real struggle to get from beginning to end.

This is an excellent book, well worked together characters and a good timeline. The theam is right out of today. I would read or listen to most of this author. Now come the bad part, it was an excellent tale almost ruined by the reader. It seem like a first time effort and someone told him you, must, pronounce, each, word, clealy. When he got to pronouncing names of characters it got to the point of grating on the nerves one example martinson would be mar, tin Soon. I will never pick anothe book with this reader

Unfortunately I'm 2 for 2 in that my last two audiobooks both ended flatly.

I enjoy when police find out what's going on through detective work, not just that they find out randomly, and that seemed to happen often in this read. And while that's probably more accurate in real life, it leaves more to be desired of a book.

Firewall too intricately plotted but still a decent read

I am a fan of Mankell. This book however tends to get lost in one too many mini issues so the overarching interest flags here and there but overall still a decent read.