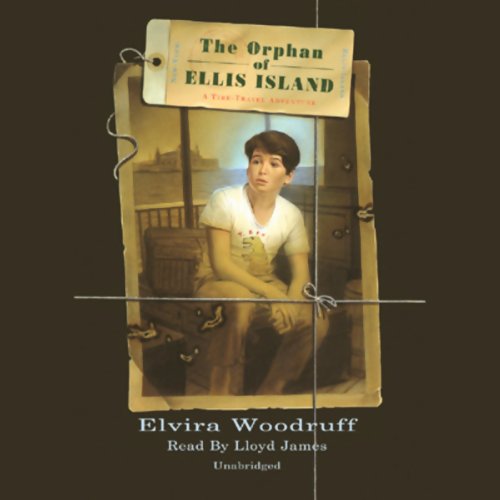 Dominic Cantori is an orphan. Ashamed of his situation, Dominic avoids making friends for fear of exposing his terrible secret. One day on a class trip to Ellis Island, a tour guide asks everyone about their families. Immediately, Dominic flees from the class and hides in a closet, where he falls asleep for hours.

When he wakes up, the museum is deserted. Lonely and afraid, he picks up one display telephone after another, listening to the recorded voices of immigrants who describe their lives in faraway countries and their journeys to Ellis Island. To Dominic's surprise, the voice of an old Italian immigrant speaks directly to him! And before he knows it, he's transported back in time: to Italy in 1908. There, he unlocks the door to his past, and discovers just what it feels like to be loved by his own family.

"Woodruff's well-researched novel beautifully describes the similarities between an orphan's and an immigrant's search for a home." ( ALAN Review
"Easy to read and hard to put down, this convincing novel gives a poignant and believable picture of the lives and motivations of some of this country's immigrants, and of one boy who learns about himself....An enjoyable and informative tale." ( School Library Journal)

No. The story progresses in a logical and timely maner.

The story was fine but a bit superficial.

Did Lloyd James do a good job differentiating all the characters? How?

Yes. Intonation and speed of his speech pattern helped a great deal

Did The Orphan of Ellis Island inspire you to do anything?

I would like it to play on my Sandisk, but it doesn't

This is an awesome story. I absolutely love this. Love the way Elvira Woodruff describes this. 😊😌 🐐.

A great story to teach youth about the foundation of the American people.

I appreciated the ability to glimpse into the story of the immigrants that are the ancestors of so many of us, the American people. It was a fun and touching story that any child should be able to relate to. I’d love to see it become classroom reading for our youth.

This is a story for young readers. It is an interesting way to talk about early immigration to the United States. Its nice, well read and very moving.

A well written touching story about a foster kid who goes back in time to his ancestral home.
The characters are well written and you really care about them.

What a wonderful story.

You really get a feel for what imagrant whent through in the in the 1900's. You also learn how a little boy who is a orphan might feel and how much family can mean.
I got quite emotional when Salvatore died. But this put a very human touch to the story. I found this to be a wonderful story quite touching. Thank you so much.

i loved this book but at the end it just kinda fades away at the end its the WORST cliffhanger... also most of the time i listend to the story it was all static don't waste your time on this book you could be doing other things ):

What did you love best about The Orphan of Ellis Island?

the author and the reader bring you right into the story i couldn't stop listening.

What does Lloyd James bring to the story that you wouldn’t experience if you just read the book?

the actual pronunciation of the italian words

clear your mind of daily stress and take a journey