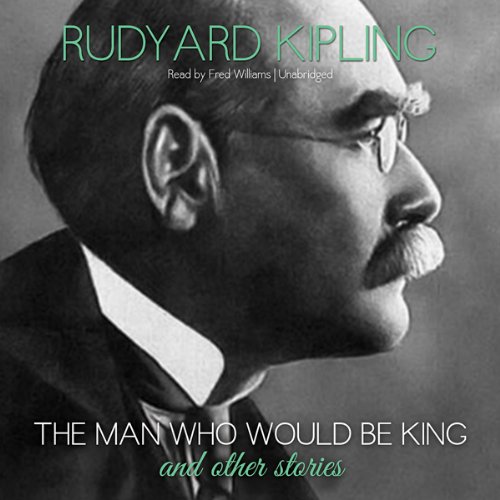 This collection brings together 17 of Kipling's early stories, written between 1885 and 1888, when Kipling was working as a journalist in India. "The Man Who Would Be King" is the story of two British vagabonds who set off to establish a small kingdom among primitive tribesmen in Afghanistan. Only one of the men returns, and his condition is so bad that the newspaperman-narrator barely recognizes him. Other stories include: "The Phantom Rickshaw", "Baa Baa, Black Sheep", "At the Pit's Mouth", "A Wayside Comedy", "Gemini", "The Strange Ride of Morrowbie Jukes", "At 22", and "With the Main Guard".
(P)1996 Blackstone Audio Inc.

The narrator is appaling. There is no distinction between the characters voices; they are all bland, unbroken, monotone which blend into each other. Sometimes the narrator does not take breath or pause between characters speech, leading to total confusion. To be fair, there are two styles of voice - one the "terribly plumby English" and the other is an "It ain't half hot, Mum" Indian accent. (For those who remember the 1970's sitcom!)

His staggered, emotionless style is also most off-putting. I enjoyed a couple of the stories from the first section but left the second half to rest in peace. Didn't even get to "The Man Who...". Most disappointed. I would go so far to say I would avoid a book read by the same narrator. If he can do this to Kipling, I don't think many other authors stand a chance...

Fred Williams renders these exciting and wonderous stories in such an unbearably monotonous voice that I couldn't bring myself to get past the first chapter. A shocking bad read.