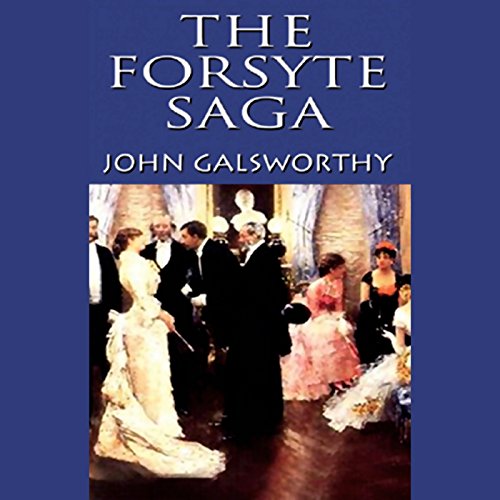 The three novels that make up The Forsyte Saga chronicle the ebbing social power of the commercial upper-middle class Forsyte family through three generations, beginning in Victorian London during the 1880s and ending in the early 1920s. Galsworthy's masterly narrative examines not only their fortunes but also the wider developments within society, particularly the changing position of women.

The saga begins with Soames Forsyte, a successful solicitor who buys land at Robin Hill on which to build a house for his wife Irene and future family. Eventually, the Forsyte family begins to disintegrate when Timothy Forsyte, the last of the old generation, dies at the age of 100.

In these novels, John Galsworthy documented a departed way of life, that of the affluent middle class that ruled England before the 1914 war. The class is criticized on account of its possessiveness, but there is also nostalgia because Galsworthy, as a man born into the class, could also appreciate its virtues.

I came to this one with no prior exposure to Galsworthy. Had never seen the BBC version or read it. I expected a Merchant & Ivory experience. I was so intrigued to find that, instead of being melodramatic or stuffy, it's a wickedly funny satire. I grinned from start to finish. The narrator is perfect. This type of humor has to be delivered deadpan. It is a family saga with all the tragedies and connections that entails, and the plot is wonderful. I'm surprised, however, that nobody had ever told me it's funny. Oh well. As James Forsyte would say, "I don't know. Can't tell. Nobody tells me ANYTHING."

Although some people might be at first daunted by the length of this book, by the end of it they might possibly be like me and wishing for it to go on. I ended up purchasing a copy of the book so that I could have a copy of the family tree. This really helped in the beginning to keep track of the characters. As another reviewer mentioned, it took a bit of time to get used to the voice of the reader, but by the end I don't think anyone could have done a better job. The story itself is terrific, a wonderful glimpse into those times. This is truly great literature and a most entertaining listen. I highly recommend this book. You will find yourself thinking about it even when you aren't listening to it.

AUGH!!!! This Reader is TERRIBLE

I was so looking forward to this months credit because I have wanted to listen to this book.. it has everything I love in an audio book.. and the reviews seemed good...

the story may be good.. but I will never know! I can't stand the reader. My computer voice simulator has more expression and tone and LIFE.

There is no life to the reading... no feeling... no emotion. The reader would be better suited to a technical manual.

I hate to give a poor review to a story with such promise. But the reader makes it impossible to do otherwise.

This is the 1st audio book from the hundreds i own that I am sure I will not listen to. I couldn't past the first 35 minutes.. how can I do 42 hours of this.

This is a long audiobook you will be sorry to see end. The characters are wonderfully developed and the era is convincingly described. The interlude "Indian Summer of a Forsyte" is one of the most moving audio books I have heard.
It takes about thirty minutes to get used to the narrator and the long list of characters. But after that you are hooked.

It's pretty hard to top "War and Peace." And I guess I'd have to say that the Tolstoy book is still my all time favorite. But after now listening to at least 100 audiobooks over the past few years, I would have to put The Forsyte Saga right at the top. Lovely writing. Beautiful creation of three generations of the Forsyte family. An arc of the story that is ultimately satisfying. I am now looking for other stories with a similar arc--i.e., multi-generational story telling. This was a magical listening experience for me. Stick with it, even though the opening segments may seem daunting in naming so many characters. The payoff is wonderful.

I had not expected much when I downloaded this and am not sure why I did -- Nostalgia perhaps due to a vague memory of late 1960-ish B&W BBC series I saw as a child when we had only one TV channel -- but I <b>loved</b> every second. I ended up listening to all nine novels of the Forsyte Chronicles (3 novels X 3) but liked the three in this collection and the first two of the next trilogy best. I'd rate those first five of the Chronilces as five star reads, with most of the remaining getting a strong four stars from me. I ended up renewing my Audible account early to obtain them.

I expected some kind of well-written soap opera, but the series turned out to be literary social commentary through the narration of events and character response. Who would have thought we could be brought to care so much about a character like Soames? I can understand why Galsworthy won the Nobel.

I thoroughly enjoyed all 42 hours of this book. I was quite sad when I finished it, having felt attached to the characters in the book. I guess that is what you get when you read a classic such as this. The author is a true master at painting a picture of his story and making you feel as though you are part of the drama. I highly recommend this book!!!

A unique and enticing look into the period. An in-depth tale into a wealthy family of the age. Soames Forsyte " The Man of Property" is a disagreeable yet upright figure. Irene the beautiful "Lady in Gray" is a captivating warm personality. Her story is tragic, one of lost love. The story intertwines with Irene's life and the men who want to possess and own her. I felt the narrator did a superb job.

From the first moment, I was transported back into another time by this very long and very poignant story. I know someone has complained bitterly about the reader, but I found the monitone reading perfectly suited the tone of the story. Of every book I've listened to, this is by far and away my favorite.

Mr. Williams is one of the most skilled and talented narrators I have ever come across. I spent many delightful hours commuting to and from Paris listening to this wonderful, masterfully written book. I too, often stuck to the right lane to add a few more minutes to my commute. I can highly recommend this audiobook.

I really fancied escaping into the Forsyte Saga, but could barely get past the first few sentences in the sample. This narrator has succeeded in producing the worst rendition of a book I have heard in a long while.

I hate that about audio books - sometimes the narrators don't seem to have a clue how to put any natural expression in. I won't be buying this and reminds me to be extra careful to listen to the samples in future. I would give it no stars but was forced to pick one!

I don't want to listen to anything else read by this actor. He spoiled an excellent book.

I was really looking forward to this epic listen! But I just couldn't get on with the narrator - found his voice incredibly irritating - so gave up about half an hour in. Would urge others to listen to the short excerpt to judge for themselves whether they feel the same.
If you don't find him grating, go ahead and purchase this - it is excellent value for a classic and lengthy novel(s)

one of the most boring readings I have heard

This was indeed good value for a monthly purchase, and the writing is excellent, but the slow flat interpretation tempted me again & again to abandon the book.

This is excellent value for one book credit. The success of the TV dramatisations is testament to the quality of the stories on offer here. Admittedly, it is a little soap opera like at times but it is very gripping listening, once you get past the first few minutes of introduction and into the story proper.

A MAN A PASSION A CLASSIC

LISTENING WHILE DRIVING THIS SAGA IS SUPERB ACCOMPANIMENT, INSIGHTFUL QUITE FAST PACED AFTER THE FIRST CHAPTER AND DEEPLY THOUGHT PROVOKING CONCERNING BOTH MODERN CAPITALSIM, LIFESTYLE AND RELATIONSHIPS, I WAS GRIPPED THROUGHOUT. A small down side is that the narrator is clear but a little ponderous. I found that playing my ipod at "faster setting" soon amended this and I rapidly became accustomed to his style. I cannot believe that such an old book can be so relevant and evocative.

The choice of reader must have been made by someone who thought that the Forsyte Saga was an episode of Noggin the Nog or Wagner's Ring Cycle!

I'm sure Fred Williams is a highly talented actor/narrator, but I suspect that even he might agree that the Forsyte Saga needs to be read by someone with a rather lighter touch. The delivery was so inappropriate that I was unable to listen beyond the first few pages and, were I able, I would have already taken this 'book' off to the charity shop!

The tone of the reader reflects perfectly the tone of the author and of the period. To maintain interest throughout such a long work is a real achievement.

Wonderful story, pity about the performance

What disappointed you about The Forsyte Saga?

The poor editing of the tracks. Not a breath between the last sentence of a chapter before the number of the next chapter. For example it might be something like ..........as she left the room chapter 6.

I loved the story with the family moving down the generations.

Very wooden, jerky style of reading at times emphasising each syllable in a word and each word in a sentence. Very strange way of speaking.

Wonderfully written, such rich expression of thought. But the thoughts.... Excruciating nihilism, human nature at its worse hopelessness. If you desire an uplifting reading, don't read this. The reader does a great job at pushing the depressing picture of English society at the turn of last century. All is told in this mournful voice. It makes you want to scream at times. Even the description of the \"good characters\" is depressing.
It was painful to listen until the end. Nothing good happens to anyone in this book. Recommended only for times when nothing can spoil your mood. Definitely a good plunge into beautifully written English.