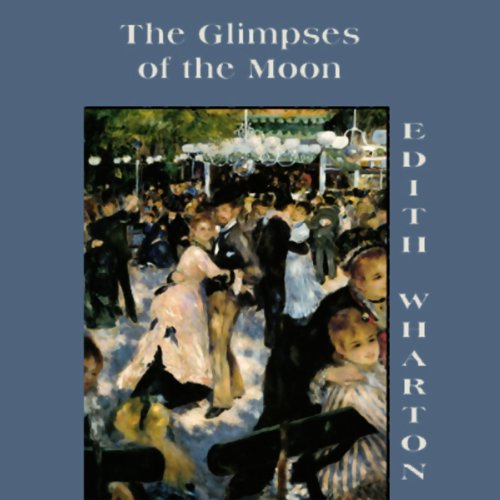 The Glimpses of the Moon

Set in the 1920s, The Glimpses of the Moon details the romantic misadventures of Nick Lansing and Susy Branch, a couple with the right connections but not much in the way of funds. They devise a shrewd bargain: they'll marry and spend a year or so sponging off their wealthy friends, honeymooning in their mansions and villas.

As Susy explains, "We should really, in a way, help more than we should hamper each other. We both know the ropes so well; what one of us didn't see the other might, in the way of opportunities, I mean. And then we should be a novelty as married people. We're both rather unusually popular, why not be frank? And it's such a blessing for dinner-givers to be able to count on a couple of whom neither one is a blank."

The other part of the plan is that if either one of them meets someone who can advance them socially, they're each free to dissolve the marriage. How their plan unfolds is a comedy of Eros that will charm all fans of Wharton's work.

"As Wharton tells [the] story, the sharp irony of both her prose and her characters bleeds into pools of true feeling." (Kirkus Reviews)
"There are only three or four American novelists who can be thought of as 'major' and Edith Wharton is one." (Gore Vidal)

Cosa pensano gli ascoltatori di The Glimpses of the Moon

Has it ever been a movie? Or a PBS Special?

If this book has never been filmed it should be. If I has, I wish I could find it. I've been a Wharton fan since college and periodically re-read House of Mirth and Age of Innocence and the ghost stories. Custom of the Country, with its "female monster of literature" Undine Spragg, is one of my very favorite books. So I was well aware of Wharton's sarcastic humor - how she got away with skewering New York society is hard to believe - but it always had such a hard edge to it. Until I happened on Glimpses of the Moon, I had no idea that Wharton could write romantic comedy with the best of them. There are still some great mocks on moneyed society folks, and plot devices based on attitudes generally don't exist today, but the scheming protagonists are strangely modern - and you might enjoy "casting" them for the movie as you read.

Classic Wharton, I loved this!

I thought I had read all the Wharton there was to read, and then so happily stumbled upon this book! It’s so wonderful, I enjoyed every minute. Compared to her earlier books, it’s so intriguing how the element of divorce upends things that would never have been acceptable in the early works.

I liked the story in general but the narrator, in my opinion, was horrible. There was just something about her voice that drove me crazy and spoiled the book.

When it comes to gorgeous prose, biting social satire, and psychologically complex characters, Edith Wharton is hard to beat. Add to that the fact that she is immensely accessible and a great storyteller. The Glimpses of the Moon has all of these qualities, but somehow, it still comes up short when compared with The House of Mirth, The Age of Innocence, and many other works of hers. The premise feels a little too determined, and the plot runs out of steam before the end. Wharton never convinced me of the love between the two main characters that everything hinges on. And the ending waxes sentimental. (Let's face it, Wharton seems most comfortable and in her element when elegantly punishing her characters.)

Anna Fields does a decent job of bringing it all to life, although at times, she sounded a tad bored. (Maybe I was projecting.)

I'm happy to have read it, but strongly recommend starting somewhere else with Wharton, or just skipping this one altogether.

I'm partway through the book and haven't been paying attention so as to be able to comment on it, but goodness Anna Fields' narration! She has this quality that seems to make a story appear to flow. She's a phenomenon! Such a terrible loss to the audiobook world.