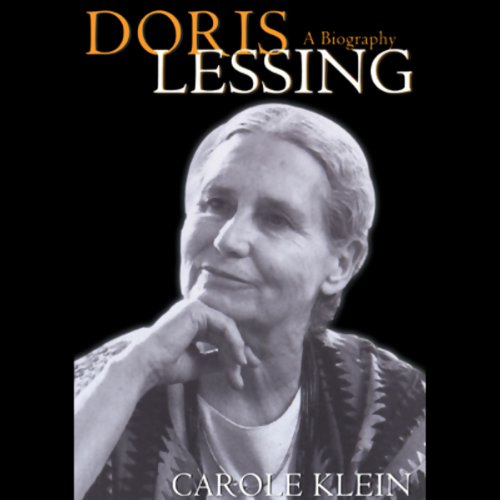 Both in her personal life and in her literature, Doris Lessing broke the rules. Born in Iran to a critical mother and a father who was shell-shocked during the First World War, she was brought up in Rhodesia. Marrying and divorcing twice, she moved with one of her children to Britain, with little more than an unpublished novel in her suitcase.

An ardent Communist before and during the Second World War - when she was married to a German - she distanced herself from the movement long before Communism's attraction faded for others.

Always prolific, Lessing continued to explore uncharted territory with her series of science-fiction novels, further unsettling the literary world when her work was submitted under a pseudonym.

Based on numerous interviews and sources, this book is a timely portrait of a fascinating woman.

"Doris Lessing's eventful and controversial life is seen from the outside in this well-researched bio, which is enlivened in audio....What emerges is a serious, analytical work for which Anna Fields's earnest tone, low-pitched voice, and deliberate pace are well suited." (AudioFile)

I really enjoyed this biography. One of those where you drive one more time around the block to hear a little more. . . It describes the rich and very unconventional life of Doris Lessing in full and well-chosen detail and the narrator is excellent. I found it particularly rich as a narrative of what it takes to live a fully creative life as a woman. I recommend it very highly.

This book is an informative account of the life of Doris Lessing. But the style of reading is not suited to the book. The voice is clear, but too matter of fact, more suited to a business report. I am enjoying the content but not the delivery.

Just because we love her doesn't mean she owes us

This book contains descriptions of Lessing's work style. Look at any complete bibliography and you wonder how she did it. The answer given here is that she worked very hard for long periods and turned out several thousand words every day. The stories and the entire worlds they were set in poured out of her.

I have read a fair amount of Lessing starting in the mid-1970s. I have read all the way through the Canopus in Argos pentology twice. The last Lessing novel I read was The Cleft about 7 years ago. Even though I read a lot, I missed a lot. (She was so prolific. She published novels faster than I could assimilate them.) I am grateful to Carole Klein for her summaries of works I have not read.

I recommend this audiobook to anyone who loves Lessing. IMHO, if you have not read her, this book is unlikely to interest you.

Having said that, I must comment on the production. I have noticed that some audiobooks sound like the narration has been speeded up just a little. Most annoyingly, pauses are obliterated. This is one of them. It's not terrible but it adds a certain unnecessary tension to the listening experience.

Nothing. It is well researched and well written, without the bias that often occurs with someone so in thrall with the subject that they have no perspective.

What was one of the most memorable moments of Doris Lessing?

I was so impressed by this womans life that I really couldn't single out one moment. A bundle of contradictions like many great artists, but principled.

Would you be willing to try another one of Anna Fields’s performances?

Yes, her voice is clear and easy to listen to and she reads with intelligence.

Was Doris Lessing worth the listening time?

I am sixty-five years old and somehow got to this age without reading Doris Lessing, because I thought she was a science fiction writer. I saw a friend toting around the Golden Notebook and it looked like a brick, a science fiction brick. Then for a reason I no longer remember I listened to this biography and that sent me looking for her writing. It was an amazing discovery and this biography is what I have to thank for it. I am new to audible books and I find that you really have to like the sound of the readers voice or it can get on your nerves, which sort of defeats the purpose.