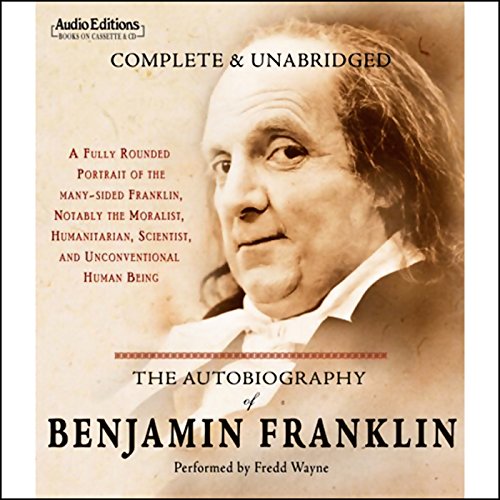 The Autobiography of Benjamin Franklin

Ben Franklin's own lively story of his early years is a unique, fascinating, and influential look at this American founding father. It has been taught in schools as a moral tract, as a guide to self-improvement, and as the Great American Success Story. It also is relished both for its insight into colonial life and the mind of the man who most affected the development of our democratic form of government. Finally, it is savored for its language; Franklin's wit, his well-turned phrase, and his humanity shine through.
(P)1997 The Audio Partners, Inc.

The reader is superb. As the book continues I can't help but feel as though Franklin himself is talking to me. It is everything an audio autobiography should be.

I admit, I listened to this one while I was painting a room in my house. Since it's written in first person, it was like having Ben in the room with me while I was working. I chose this book since I knew I was going to see the Ben Franklin exhibit at the Atlanta History Center, and the exhibit mirros much of the book. What an open thinker he was!

I have listened to other versions of BF Autobio and Mr Wayne's narration is by far the best.

Would you consider the audio edition of The Autobiography of Benjamin Franklin to be better than the print version?

Yes, because this narrator was so expressive as Ben that it was as if I was listening to the actual Benjamin Franklin telling me his story.

Which character – as performed by Fredd Wayne – was your favorite?

He WAS Benjamin Franklin.

I enjoy autobiographies over biographies. What is included or excluded and how it is portrayed lends great insight to the subject.

Very enjoyable and worth listening to!

What Happened to the Balance if Franklin’s Life???

Very much interested in Franklin’ s life I listened carefully to the narrative. It stopped while Franklin was in England getting royal permission to tax the proprietors. Very unsatisfactory. :(

Inspiration for living a balanced life. Ben Franklin was a very smart and influential man. He lived an incredible life. This is a great performance of his autobiography. I love the glimpse into colonial life.

Okay but really not what I was looking for

Book has stories of Ben Franklin but I thought it would tell more about his steps to become a better person and this was only about 2 pages of the book. So I was disappointed.

I had a difficult time following the vernacular in this book. And I was disappointed that the story covered so little of Benjamin Franklins experiments (e.g. electricity) and no information about his involvement in the Continental Congress.

along about 1750,the book abruptly ends

absolutely HATED the fact that the book abruptly ends..am I missing Part Two?

What could Benjamin Franklin have done to make this a more enjoyable book for you?

What else would you have wanted to know about Benjamin Franklin’s life?

the rest of it

any additional content? where's the rest of the story?

A good insight into the character of the man

As one of the founding fathers, Franklin holds an important position in the history of the world, not just the United States. How the men of Franklin's era - many of them relatively young - thought the way they did, articulated those ideas and, most importantly, acted on them is inspirational.

The narration is particularly good - he really seems to capture the spirit of the man.