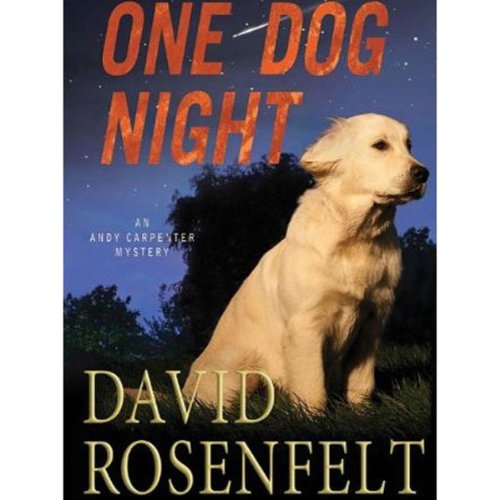 For six years Noah Galloway has lived with a horrible secret and the fear that his rebuilt life could be shattered at any moment. Now his dread has become a certainty, and he has been arrested for the arson murder of 26 people.

David Rosenfelt, a native of Paterson, New Jersey, is a graduate of NYU. He was the former marketing president for Tri-Star Pictures before becoming a writer of novels and screenplays. He currently lives in Southern California with his wife and 35 dogs.

Grover Gardner, a Washington, DC.-based actor, director and audiobook narrator, has been a member of the Woolly Mammoth Theatre Company in Washington, as well as Resident Director at Everyman Theatre in Baltimore.

Although I've been a member of Audible for several years and have listened to well over 100 books, the Andy Carpenter series is my absolute favorite. The story lines are great but what brings Andy to life is Grover Gardner. His narration of this series is dead on and I can't imagine anyone else doing it. The only problem with the series however is I can't quit listening and before I know it the book is over leaving a void in my literary life until the next one comes out. If I could offer some advice to Mr. Rosenfelt, it would be to write quicker and get me more Andy Carpenter. I would highly recommend this series of books to anyone and everyone.

The wait is over!

I have been waiting for David Rosenfelt's next Andy Carpenter series release for almost a year now! To me, Grover Gardner IS Andy Carpenter. I could not imagine another narrator for this character! I absolutely love this series and am completely hooked! I highly recommend these books to everyone. By accident, I started in the middle with "Dog Tags". However, it was kind of fun to go back to "Bury The Lead" and see how it all started! It has it all: suspense, drama, compassion, romance and a witty humor that keeps me wanting more. Be careful...once you start...you just can't stop! Mr. Rosenfelt...I'm ready for the next one!

There are very few authors who make me laugh out loud but one I can count on to do that is Carl Hiaasen. There were a few times in this book where I could have sworn it was Hiassen's writing - and that's high praise from me. I think he's brilliant with what I call "The Kooky Native" genre. Both Rosenfelt and Hiaasen can write about everyday events in a really humorous way. A little twisted, yes. But funny.

This book isn't going to make you smarter or richer. What it will do is make time fly by on a long drive and give you something to chuckle about. It's cleverly done and really well narrated.

There's great dog stuff that's woven through without dominating the storyline. (The mastiff stuff is hysterical.) There are those Hiaasen-like characters who form the underbelly of real life Patterson, New Jersey. The whole thing is quirky good fun. I'm so glad to have discovered this author. It will be my go-to the next time I need to clean the garage.

I bought One Dog Night and New Tricks in this wildly popular series expecting great things. These are good 3 star novels made worse by bad puns and smartass, unfunny remarks. I am disappointed.

Andy Carpenter books are just plain fun. Andy is funny, and has so much interesting self-talk going on in his head (which you get to hear in the book). You also hear quite a bit about Tara, Andy's golden retriever, a plus for dog lovers.

In this installment of the Andy Carpenter series, Andy and his team take on a client who has been accused of locking 27 people in an apartment building and then setting fire to the apartment building. Seems like a lost cause, but somehow Andy and his team figure things out and get a good resolution as always. Great book, can't wait for the next one!

David Rosenfelt never disappoints with his books about Tara and the rest of the gang. This is another good one. It is such an enjoyable, fun read. The narrator is excellent, the sarcasm is fun. Keep them coming.

Good But... Maybe a bit too dogged?

I've listened to every one of David Rosenfelt's tales of wise-cracking lawyer Andy Carpenter. His ensemble cast have become friends.His plotting's usually fun AND intriguing. This time though, the intriguing part was a bit, um, flea-bitten. Instead of his usual build... the ending's a tad frenetic... like the last two minutes of an NBA game with an inexplicable court room ending. Well, ok... explained but only with a LOT of doggedness on the part of the reader. I'm hoping that Rosenfelt's not running out of steam, or has perhaps found that his doggie plotting may have skipped its leash or become somewhat lost.

Maybe next time Tara and her fiends may become a LOT more atmosphere and considerably less plot drivers? Once again... I'd recommend as a reader that you begin this series at the start and maybe... maybe... wait for Andy Carpenter's next capade and skip over One Dog Night which may have come very close to going to the dogs.

This was another fun novel by David Rosenfelt. The humor he includes in his writing just puts a huge smile on my face with every chapter. I swear it feels like Andy Carpenter is one of my good friends and I can't wait for every new book. The storyline kept me guessing and the characters excellent.

Always Well Worth the Listening Experience.

David Rosenfelt's Novels are always very enjoyable audio Books, especially with this crowd of fun characters. I own all of David's recent Books and all have been well the effort & expense. Not all of David's Books entail the rascally attorney Andy Carpender & company but here are Andy's loveable team mates at their best. Rosenfelt spins an excellent yarn and he has a very indebth grasp of our legal system, amazing even. For an enjoyable teeth tightening listen you could not go wrong with Rosenfelt's latest offering. A teriffic blend of humor, legal masinations & a "who done it" all in one package. John Wagner, Professional Grandpa

David thank you so much for 8 hours of listening pleasure. The suspense, humor and cast of characters kept me wondering and laughing.