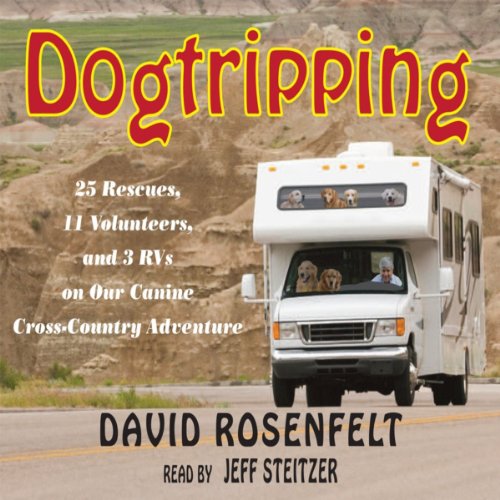 When best-selling mystery writer David Rosenfelt and his family moved from Southern California to Maine, he thought he had prepared for everything. They had mapped the route, brought three GPSs for backup, as well as refrigerators full of food, and stoves and microwaves on which to cook them. But traveling with 25 dogs turned out to be a bigger ordeal than he anticipated, despite RVs, the extra kibble, volunteers (including a few readers), and camping equipment.

Rosenfelt recounts the adventure of moving his animal companions across the United States with humor and warmth, and tells the tale of how he and his wife became passionate foster parents for rescue dogs, culminating in the creation of the Tara Foundation and successfully placing several thousand dogs with loving families.

David Rosenfelt, a native of Paterson, NJ, is a graduate of NYU. He was a former marketing president for Tri-Star Pictures before becoming a novelist. Narrator Jeff Steitzer has appeared on Broadway in "Inherit The Wind" and "Mary Poppins" in regional threaters around the country, and is the Multiplayer Announcer for all HALO video Games.

“Jeff Steitzer's deep, pleasant voice is enjoyable to listen to, and he aptly portrays the couple's fervent devotion to the task of rescuing dogs from shelters. His pacing and intonation help to keep the listener in the story of how the couple came to amass so many dogs, the varied personalities of their canine family members, and the way they managed to transfer their household cross-country via recreational vehicles and a team of fellow dog enthusiasts. Listeners who are dog lovers will be inspired.” (Audiofile)

Only about 1 hour of the book is about the trip

I expected this story to be about the trip, BUT, it was mostly about all the different dogs they adopted .. which was interesting, BUT .. not the actual story of the drive.

Would you recommend Dogtripping to your friends? Why or why not?

if they wanted to know about adopting dogs...

This book is just too much fun ! Wish I had been there !Checkout the facebook page and you can see the Dogs hes talking about.It looks like it was a lot of fun.!

Andy Carpenter Would Stand Up and Cheer

A fun trip across country with David Rosenfelt, his wife Debby, a troop of dog loving comrades and all those dogs! The dog rescue stories integrated with the actual trip make this a great listen for any animal loving reader. And now I know the real identity of Andy Carpenter.

I cried, laughed and loved this book

What did you love best about Dogtripping?

First, I am a big fan of David Rosenfelt especially in his Andy Carpenter's series. When this book came out, I was excited because I want to know more about his love for dogs. The book is awesome as he described some of his rescued dogs and the trip across the country. David and his wife are good people with good hearts. I like him even more after I read this book.

I love dogs and to hear how they rescued dogs that had no hope in shelters is awesome. It inspired me to volunteer and help Humane Society.

I laughed and cried. Some idiots (as Rosenfelt called) can hurt their dogs and just abandoned them without any second thoughts. There are too many idiots and as a result there are too many poor dogs left at shelters across the country.

Just get this book and you would love it. I also think it would make you a better person after reading it as well.

Entertaining, funny, uplifting. Loved it all!

You don't have to be a fanatical dog lover to enjoy this wonderful story. David Rosenfelt is a terrific writer who happens to love dogs. His self-effacing telling of this remarkable trip across the country with more than twenty dogs is a hoot! Proving again that "truth is stranger than fiction". I hope we will be treated to a "part two" of this engaging story as soon as David catches his breath.

I hated to have it end - wonderful story!

I have recommended it to several friends because it is such a great story. Dog rescue is such an emotional process - and the fact that they were able to manage to rescue so many and remain so positive is amazing. The humor, genuine emotion and teaching moments in the story kept my interest all the way through. I found myself not wanting to listen as it got close to the end. But then just had to turn it on to see what would happen next.


What was one of the most memorable moments of Dogtripping?

I loved the story about the young man who was able to move back home once he had a dog in his life - and one that was inches away from being put down.

What does Jeff Steitzer bring to the story that you wouldn’t experience if you just read the book?

I enjoyed the sound of the emotions in his voice. It added quite a bit to the general enjoyment. Sometimes the words were ambivalent as to what emotion was behind them, but the sounds of respect, reflection, sorrow and joy in the voice allowed me to participate more fully.

I laughed and cried - making listening while driving a bit challenging at times.

I hope they plan to move across country again - with another journal of the trip forthcoming.

An Inspiring Connection Between Author and Reader

I’ve been a huge fan of Rosenfelt’s since first discovering his wonderful Andy Carpenter series on the bookstore shelves in 2009. I have since purchased and read all of his mystery novels - both within the series and his standalone thrillers. This book marks not only Rosenfelt’s nonfiction debut, but also my first experience listening to one of his books rather than reading it. And what a terrific experience it was!

Morning traffic - once the bane of my commute - suddenly became a welcome thing. I became a nicer driver - waving people ahead of me, in no hurry to get to where I was going, content to listen to the smooth narration (though not read by the author, his voice certainly sounded convincing to me) alternate between relating the history of his journey into being “dog-crazy” and his cross-country move from California to Maine. Some chapters focus on one particular dog in his family and because the Rosenfelts tend to adopt only the most unadoptable of dogs (the elderly or terminally ill), these sections evoke tears. But, like in his fictional novels, Rosenfelt’s humour balances the sadness. And the books is also filled with a lot of love - not only for the dogs (golden retrievers in particular), but also the very obvious love for his wife. It is a wonderful book and I was genuinely disappointed when it ended - I wanted more stories! And though I wouldn’t want to slow down the publication of his fiction novels, I would love to read (listen) to more about Rosenfelt’s real life.

My biggest regret - not signing on for the journey

David Rosenfelt is my all time favorite author. If you love to laugh out loud, this autobiographical account of his overzealous life with dogs and trekking across the country with 25 canines and a group of equally dog crazy compassionate human folk will delight you. I'm not nuts for dogs, but I am for David's gift for story telling and now feel like I'm missing something in not rescuing a three of four legged canine to our family.

It's not an Andy Carpenter story, but you won't be disappointed. I loved getting to know more about my favorite author. Love that he is so genuine.

I laughed... a lot! But the plentiful tales (not tails) of countless dog rescues did make my heart swell.

Can't wait for the next David Rosenfelt novel.

Could this be from Andy Carpenter author?

Has Dogtripping turned you off from other books in this genre?

Had we not been Andy Carpenter and Grover Gardner fans, we would not again listen to a book by Rosenfelt. Boring tale, little detail about the actual trip the title promises. The author and his wife offer an irrational dog obsession even for dog lovers, a lunacy he repeatedly reminds us of. Seltzer presents a highly irritating narration that strips the intended humor; It is similar to the self deprecating humor that works for Carpenter/Gardner but is utterly ridiculous and unfunny here. On top of that there are innumerable instances of bad grammer ( i.e. " between my wife and I" ) . One has to wonder if the author really is somewhat illiterate, or if the editors didn't edit, or if no one cared as long as there was a book to sell.

Would you be willing to try another one of Jeff Steitzer’s performances?

A few pleasant dog anecdotes buried between endlessly boring passages and tales that seemed calculated to fill enough pages to justify a book. Even telling how Tara will never age in the Carpenter series presents an unnecessary letdown.

If you could sum up Dogtripping in three words, what would they be?

I liked the way the stories of the different dogs were woven into the story. I think that a bit more of the story could have focused on the trip.