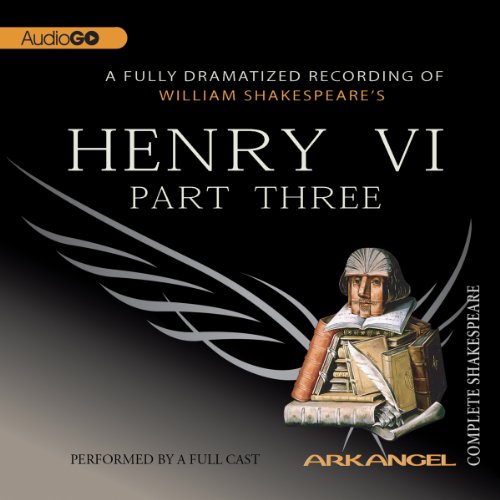 The monstrous power of one of Shakespeare's most memorable characters, Richard Plantagenet, emerges in Henry VI, Part 3, a portent of things to come.

The Yorkists have been temporarily victorious and the Duke of York has assumed the throne, but the Lancastrians, led by Queen Margaret, counter-attack. As the fortunes of war shift, both the innocent and the guilty are swept up in the maelstrom. And increasingly dominant amid the chaos is the sinister figure of the crook-backed Richard, Duke of Gloucester.

One of my favorites

This is a complicated play, like Part One, and if you're not familiar with it, it might be a good idea to keep the text handy. The first segment of this play deals mostly with the scheming that leads to the downfall and murder of Good Duke Humphrey, the King's Protector. The conspiracy to bring this about is led by Queen Margaret and (according to the play) her lover, the Duke of Suffolk.

The second segment stages the rebellion of Jack Cade and - following the collapse of that disorganized revolt - an even more dangerous one led by Richard, Duke of York. York finally comes clean about his determination to take the throne, and he and his sons and allies unleash the "dogs" at the Battle of St Albans. The War of the Roses is on.

Several people lose their heads in this play: Suffolk first, then Lord Say and his son-in-law James Cromer, and finally Jack Cade himself. The heads are not lopped off and forgotten: they are handled, fondled, tossed, stuck on pikes and made to kiss. It must have been quite a challenge for the Elizabethan props department.

David Tennant, Clive Merrison, and others continue the contributions they made in Part One. Tennant gives a standout performance as the tortured and passive king. Late in the play, he's had enough, and he explodes with anger and invective. It's an all-too-brief moment: after banishing Suffolk, he lapses back into tortured passivity.

Kelly Hunter, as Queen Margaret, had a few lines of dialogue in Part One, but here assumes a major role. Margaret expected to marry a KING, not the huddled mass yearning to be free that her husband has become. "What are you made of?" she yells at him, as the Battle of St Albans goes against them. "You'll nor fight nor fly!" The royal faction increasingly looks to her for leadership.

Another distinctive voice in this part is Kenneth Cranham as Jack Cade. To me, Cranham has always sounded a bit like James Mason. Here he plays an out and out villain - an anarchist, an ignorant leveler, the embodiment of chaos. Yet, Shakespeare being Shakespeare and Cranham being Cranham, even Cade gets a moment of compassion (only a moment: if you blink, you'll miss it).

Another voice to "watch" here is David Troughton, son of Patrick (the Second Doctor). He plays Richard Crookback, second son of the Duke of York. The role is brief here but will be developed brilliantly in the next two plays.

Of the three Henry VI plays, Part Two is my favorite. It pretty much has everything - and best of all, it has the classic line: "The first thing we do, let's kill all the lawyers!"

I can smile, and murder while I smile.

"The smallest worm will turn, being trodden on."
― William Shakespeare, Henry VI, Part 3

In the Henry VI trilogy, this is probably my least favorite. It wasn't bad and had some good lines (not enough great ones) and exciting sequences, but it just didn't have that extra-level, that super-float that Shakespeare sometimes gives his plays. This one just seemed a bit "bound" by this history. It was overshadowed by the other Henry VI plays, other Henry plays, other history plays, other Shakespeare plays. It was out played.

― I am your butt, and I abide your shot.

― I know, I am too mean to be your queen;
And yet too good to be your concubine.

― What fates impose, that men must needs abide;
It boots not to resist both wind and tide.

― Why, I can smile, and murder while I smile.

― Down, down to hell; and say I sent thee thither.

― Then, since the heavens have shap'd my body so,
Let hell make crook'd my mind to answer it.