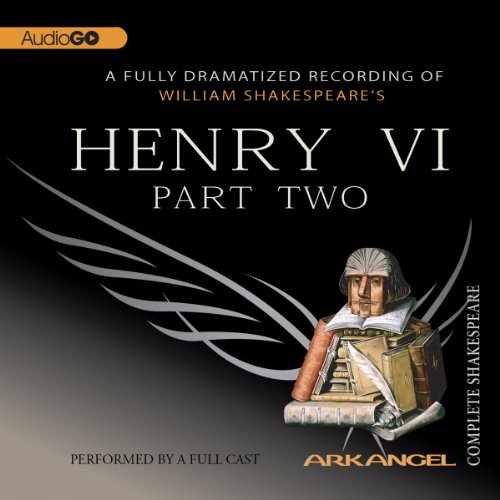 Rife with intrigue and treachery, this history play depicts the onset of the fifteenth-century Wars of the Roses between the houses of Lancaster and York.

Young King Henry VI has married the beautiful Margaret of Anjou but the new queen is ruthless and ambitious. Supported by the powerful Duke of Suffolk, Margaret plots the overthrow of her enemies, chief among them the Duke of Gloucester. But the Duke of York also aspires to the crown, and the common people, led by Jack Cade, are in rebellion. To the despair of the mild young king, England descends into civil war.

This review is actually for Part Three

The third part of Henry VI condenses most of the action of the War of the Roses, and as such is filled with one (sometimes confusing) battle after another. Wakefield, Barnet, and Tewkesbury follow one another in a whirlwind, dissolving into clashing steel and shouting men.

The rise and fall of great ones can be confusing too. The Earl of Warwick fights for York, then Lancaster, and then he's dead. Clarence, one of the sons of York, fights for his brother, then switches sides, then switches back again. Henry (played here, as before, by the brilliant David Tennant) is king, then he's not king, then he's king again; Edward, son of Richard Duke of York, is king and then not king and then king again. When the dust settles, Edward is on top and Henry is dead.

It's probably better not to try to keep it straight. Just go with the flow and focus on the great set pieces in the play, of which there are many. One enacts the death of Richard Duke of York, standing on a hillock in the midst of battle, tormented by the taunts of Queen Margaret (played as before by the excellent Kelly Hunter). “She-wolf of France, but worse than wolves of France!” he cries: “O tiger’s heart wrapped in woman’s hide!”

Another great set piece - also on a hillock in the midst of battle (on stage, they could be the same hillock, lending a visual resonance to the scene) - King Henry laments his fate, born to be king but without the strength of personality needed to do the job. As he watches, “enter a father who has killed his son and a son who has killed his father,” portraying the costs of civil war in starkly human and individual terms. (This scene, with haunting background music, is particularly effective.)

And keep your eye as well on David Troughton as Richard, younger son of the lamented Duke of York. His murderous ambition becomes clear as the play progresses. The Richard who ends this play is the Richard who opens his own play, Richard III (the next in the series), declaring that “the winter of our discontent” has been made glorious summer “by this son of York” - his brother Edward. By the end of THAT play, everybody - Edward, his children, brother Clarence, Richard himself, and all the Lancastrians but one - is dead.

If you've seen Richard III and have wondered about the background, the third part of Henry VI is an excellent introduction.

First thing we do, let's kill all the reviewers!

"Burn all the records of the realm. My mouth shall be the Parliament of England."
- Shakespeare, Henry VI, Part 2, Act IV.7

So, I liked Part 2 of Henry VI a lot better than Part 1. It still isn't Hamlet, but it is complicated, funny, twisted in parts. One of my favorite aspects of the play are the scenes with Queen Margaret and Suffolk. No. They aren't great people, but they are a great couple. Their parting is amazing and poetic. My other favorite part is, well, anything with Jack Cade/Sir John Mortimer (how can you not love a guy who knights himself?). He is one of those great populists in literature and history, belonging on the shelf next to Huey Long and Donald Trump. Dammit. I'm trying to avoid Trump by reading the classics and I come across Cade and the Butcher and all their anti-intellectual followers. Burn the accountants and kill all the lawyers. We march on Washington D.C. boys.

―“The first thing we do, let's kill all the lawyers.”

―"Let them obey that knows not how to rule.”

―"Could I come near your beauty with my nails,
I could set my ten commandments in your face.”

―"My shame will not be shifted with my sheet --"

―"A staff is quickly found to beat a dog."

―"So he be dead; for that is good conceit
Which mates him first that first intends deceit."

―"If I depart from thee, I cannot live.
And in thy sight to die, what were it else
But like a pleasant slumber in thy lap?"

―"Because my book preferred me to the king,
And seeing ignorance is the curse of God,
Knowledge the wing wherewith we fly to heaven."

What a cast of characters!

Conspiring Margaret of Anjou to weak Henry VI to rabble-rousing Jack Cade, Shakespeare has enlivened history. Not much of a story or plot maintained.

This production is an illuminating and moving performance of Shakespeare’s play. The story could be hard to follow or lose some listeners’ interest if it were not so well executed. Tennant’s and Hunter’s performances particularly bring those characters to life. Well done, all around!

If you have ever struggled understanding Shakespeare you must try audio versions. I've been listening to this productions version of all of Shakespeare's works and I have yet to be disappointed. I can't speak highly enough of the performance. It's as if you are transported back in time, and for this particular book you're afraid for your life!

Cast is great, narration excellent, but again as in part one, too much trumpets horns and bulges I find there is too much noise during dialog. But still looking forward to part iii.