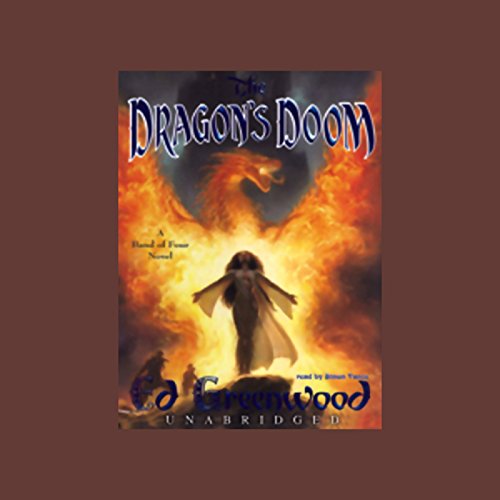 Hawkril the mighty warrior, Embra the beautiful sorceress, and Craer the crafty thief mourn their lost companion but now must forge new alliances in their roles as overdukes of Aglirta, a land that has been torn asunder by double-crossing royals, savage warlords, and sinister high priests.

Now the kingdom is threatened by a mystical berserker plague that is promoting anarchy among the citizenry, while serpentine acolytes move in the shadows to try and resurrect a new Serpent.

Will a new Dragon rise to vanquish it? And if so, who will it be, and can it avoid the fate of its predecessor?

The fate of Aglirta lies in balance in the triumphant conclusion of this cycle of Band of Four novels.

Dragon's Doom is typical Greenwood, full of magic and Dungeons and Dragons type fantasy. For the reviewer who said this book was difficult to follow, I suggest starting at the first book in the series. Greenwoods work is formulaic, but that's pretty typical of most fantasy authors. This is a solid book for fans of D&D, non-genre fans may be bored from the constant battles and shallow characters. If you want deep characterization read Lois Mcmaster Bujold, if you want dungeon exploring hack and slash adventures and magic battles read Greenwood.

I wish this reader had done all four!

This was the best listen of the series! Great narration, good "color" without being a full cast "radioplay" type of production... a good balance!