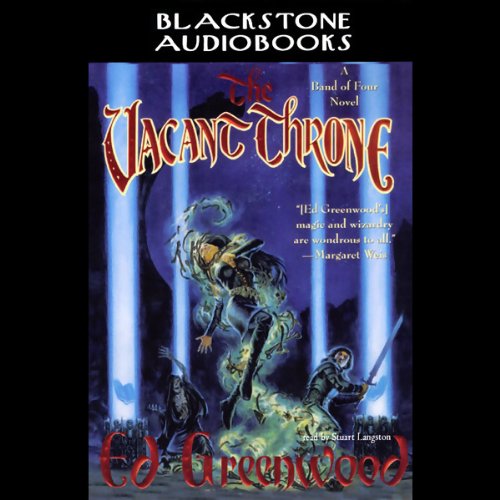 Aglirta is known as the Kingless Land. Once a prosperous and peaceful river valley, it has fallen into lawlessness, studded with feuding baronies engaged in a constant state of war. But the land is kingless no more, for the Sleeping King of legend, King Kelgrael, has been awakened by the efforts of The Band of Four.

The Four are: Hawkril, a bold and brave warrior gifted with great strength and fortitude; Craer, the crafty and clever thief; Sarasper, the learned and wise healer; and last, but not least, Lady Embra Silvertree, the mystical Lady of Jewels, a powerful sorceress.

With the aid of the magical powers of one of the batteries known as the Dwaerindim Stones, the king's curse has been lifted. But it will take more than the power of a single Dwaerindim to allow him to occupy the long vacant throne of the land, for there are ambitious and devious barons ready to unseat him and challenge him for his royal dominion. While inhuman and dark forces lurk behind the scenes waiting for the opportunity to bring all of Aglirta under their evil shadow, the Band of Four must set out again on an arduous quest for the secret that will allow the kingdom to return to the safety and prosperity of its former glory.

"Ed Greenwood is a master of fantasy adventure world building. His magic and wizardry are wondrous to all!" (New York Times best-selling author Margaret Weis)
"Langston's narrative voice is strong, and he helps to bring both characters and story alive." (AudioFile)

This book is not too original. I have read it before, oh so many times. The narator's voice is monotonous.

Lots of Gore with an occasional story

The book seems like it was written by a video game developer. Lots of long horribly detailed battles, hundreds of detailed descriptions of people dying and oh yeah, occasionally a tiny little story, just enough to link the battles together.

I am soooooo sick of mages that die, but then really don't die. Some of them have died gory deaths 3-4 times and this is only the second book.

This is the most uninspired reading of an audiobook I have ever tried to listen to. I felt like I was back in high school Economics class. The story might have been great but this was the most boring narrator I have EVER heard. I found my mind wandering multiple times just during the first hour or so of this and finally just turned it off. Don't waste your money!

Narrartor was monotone and un-interesting.

What would have made The Vacant Throne better?

The only reason I listened to this book was anticipating Simon Vance completing the series...which was worth it. I don't feel right returning the book since I listened to it, but will never purchase another book with Stuart Langston as narrator...regardless of author. It was that bad!

Not sure why the Narrator Langston was chosen for such a great story-line. Mr. Langston did NOT do this book justice with his rendition. The last 2 books were enthralling with Simon Vance at the helm narrating....shame

Stuart Langston the king of drone

Stuart Langston the king of drone. What a totally boring narrator, he totally ruins a good book.

I thought it was being read by the computer narrator sam.

Don't bother listening to this crap.

The narration might be a little tough to get use to but the book is well worth adjusting your listening skills. I just downloaded the last two books and can't wait to listen to them.

My husband read the book in another format and loved it. But this reader is so monotone that We are wondering if he is even human or a computer voice. Don't waste your money.

Egad. I'm not a one to complain normally, but this narration was so flat and uninteresting that I had to come and warn other listeners. I was excited about this story, but the monotone voice made listening so difficult that I turned it off and trashed it after a good hour attempt at getting enough into the plot to be able to stand the bad reader. Don't buy this audiobook. It's a terrible waste of money. Instead, read the thing yourself....

i remember reading this on deployment outstanding narration will listen to more by him!!! excellent!!!

The first book of The Band of Four hooked me on the series. I was very excited to start the second. The plot is wonderful, even if the dead seem to come back to life far too easily. The problem, way too much sex. The first book had one scene toward the very end that discomforted me, but I was really impressed because it got the rest of it's adult references across without feeling like porn. The second book, however, was just lewd for lewdness sake. I made it halfway and just had to put it down and return it. Definitely not family friendly and not my genre, but I will admit the plot was intriguing. I am sorry I won't find out how it ends.