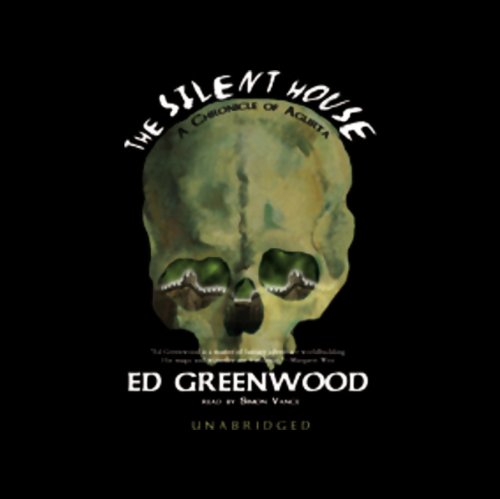 The Silvertree Stronghold is more than just the family estate of the feared and awed Silvertree dynasty, whose wizardly powers and political cunning has survived through many generations. But with their power comes a curse, a curse more terrifying than rival warlords or the mystical threats of the dreaded faceless, an inward corruption of the soul that binds one's power to a downward spiral of madness and magic.

The Stronghold goes by the name of The Silent House. It is a soul repository for this dynasty. Two daring treasure hunters hope to profit from unlocking the secrets of its past and harvesting the powers of its bounty. But unbeknownst to them, an observer watches their every move and waits to make his presence known from the halls of eternity.

Filled with sorcery and battles between the dead and the undead, as well as plots of sinister deception and insidious manipulation, The Silent House is the first epic chronicle of the land and people of Aglirta.

"Beneath all the surface action and adventure, the romance and battles that are standard sword-and-sorcery fare, the author subtly explores the effects of culpability and remorse. He extols ideals of heritage and courage even as he depicts often misguided individual motives with grim naturalism. This is a book as philosophically engaging as it is entertaining." (Publishers Weekly)

I can only say that this book was an exercise in memory to keep track of all of the character names that you are barraged with, most of which were very hard to discern. This book is supposed to read like a composite history of the "Silent House" and therefore jumps about quite a bit. I found it quite difficult to keep track of the myriad characters, most of whom you have very little time to develop any sort of connection to. There are no real protagonists in the book after the first chapter.

I was not overly thrilled by this selection.

I only finished it because I had nothing else to listen to. It was awful. I understand that it is the first book in a series and it had a very prequel feel to it - but it did not make any sense at all. Lots and lots of swordfights, but no real plot that makes any sense.

i wanted to like this book since i enjoy forgotten realms; but i just couldn't get into it. i find that audible is sorely lacking in the horror and fantasy department. i was so hoping this book would break the spell. alas, the chain of bad books continues.

Non-cohesive story, extremely difficult to follow along. Simon Vance is always excellent. But this story line jumps all over the place. Characters were brought into the story and I had no idea who they are.

Would you ever listen to anything by Ed Greenwood again?

The concept of the "Silent House" and denizens within were great.

This is the first Simon Vance performance, of 30+ books I've listened to, that I didn't love.

It does seem to go on and on

I found myself zoning out while listening to this audiobook. The story follows the fight over this house over generations between humans and the "coglore" which are shape changers. As the book goes on, the house takes on bigger and bigger dimensions and becomes more and more haunted. It is really more like a series of short stories that all take place in similar settings. The author can drag out some of the scenarios in the book to rediculous lengths. I found myself wishing that he would just get on with it instead of describing fight after fight after fight. It did help to pass the time on a long road trip, but I found myself watching out the windows as much as listening.

A bad idea or poorly executed

I'm an Ed Greenwood fan so I was very disappointed with this one. It is basically a collection of 13-14 short stories with another serving as a "wrapper". An old thief and an apprentice sneak into the Silvertree House to loot it. The old thief sees something that reminds him of a tale and *poof* short story one begins. This continues through the whole book. Mr. Greenwood tells us about the lands and peoples around Silvertree House over hundreds of years through the stories. I can't say that it is boring. The book is crammed with sword slinging action, powerful spells, and gore galore. I think the problem is that there were so many of the short stories and so few characters that persisted through any substantial portion of the book. I never connected with the two thieves in the wrapper story, and most of the shorts are tales of groups of adventures who enter the House and get slaughtered to a man, so the whole thing seemed pointless. I think the book may be more palatable if you know going in that it is not a novel, but I still cannot recommend it.

Convolution and Doom Are Us

I'm almost finished this book. I have to admit that it is very hard to follow and when you do follow some of the story and start warming up to the character or characters - bang, they die. There's nobody to root for. Not even the bad guys. I've been listening to audio books for years and I've found very few this difficult to follow. I don't know if I can finish it. I probably will finish it, just so I can have some closure.

Would you try another book from Ed Greenwood and/or Simon Vance?

Would you ever listen to anything by Ed Greenwood again?

Hard to understand narrator with his accent.

If you could play editor, what scene or scenes would you have cut from The Silent House?

I agree with most of the previous reviews. I cannot even finish it. Just killing, killing and more killing, by, and of, characters that don't mean anything.