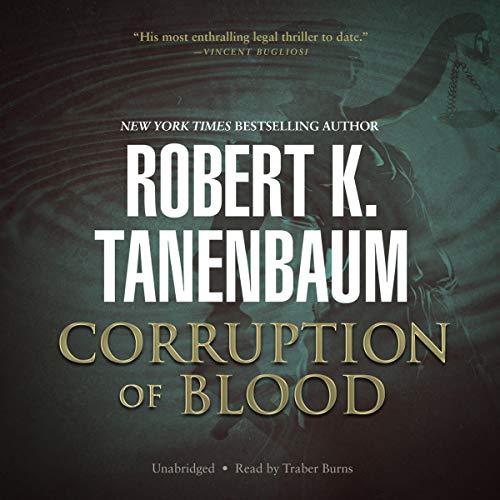 After many years working on some of the toughest felony cases in New York, prosecutor Butch Karp takes on one of the most notorious homicide cases in modern history when the US Congress invites him to become legal counsel to the Congressional committee charged to reinvestigate the assassination of President John F. Kennedy.

Teaming up with his crime-fighting wife, Marlene, and two loyal assistants, Karp knows the only way to determine what occurred is to let the facts and the evidence lead inexorably to a just result. But when he begins to dig up long-buried secrets, he makes enemies who will threaten his case - and the lives of the people he loves most.

Would you try another book from Robert K. Tanenbaum and/or Traber Burns?

Yes, of course. I have read and listened to many of Tannenbaum's books and, this one notwithstanding, have enjoyed them immensely.

Would you ever listen to anything by Robert K. Tanenbaum again?

As noted above, yes

What character would you cut from Corruption of Blood?

I would not cut any of the characters but I would attempt a more honest rendition of the Kenneday assassination.

Shame on Tannenbaum for writing such a sensationalist and inaccurate account of this tragedy. Particularly deplorable is the fact that Tannenabum claims to have been a staff attorney for the House Select Committee on Assassinations, meaning that he had access to the facts. Also, unlike the other books in the Karp/Ciampi series, this one lacked coherence and was boring.

It was a good lightweight book. Lots of true stuff. And lots of made up stuff. Overall I enjoyed it. Narration was great except for the wife’s voice. Horrible. Sounded like Lou Costello talking like a woman. But the rest was fine.

Too much gratuitous sex. Why is the wife a SEX crime prosecutor? LBJ NOT mentioned.

Being from Dallas the story line caught my attention. I like the way Tanenbaum worked JFK into the story line. I had heard someone say that Stephen King is to literature what a cheeseburger is to lunch. That is how I feel about Tanenbaum, Big Mac with fries and a chocolate shake.

Not to spoil the ending but I feel the way Butch feels, Corruption of Blood is worth your time.