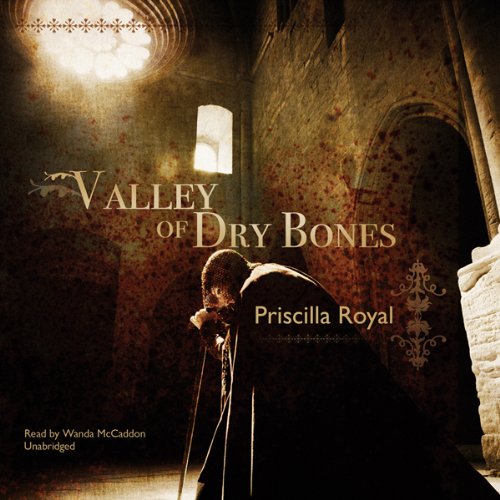 In the late summer of 1274, King Edward has finally been anointed England’s ruler, and his queen contemplates a pilgrimage in gratitude for their safe return from Outremer, a journey that will include a stay at Tyndal Priory. Envoys are sent to confirm that everything will be suitable for the king’s wife, and Prioress Eleanor nervously awaits them, knowing that regal visits bring along expense and honor.

The cost is higher than expected, however, when Death arrives as the emissary. One of the courtiers is murdered near the hut where Brother Thomas now lives as a hermit. Each member of the party has reason to hate the dead man, including Crowner Ralf’s eldest brother, Sir Fulke, and the prioress’s nemesis, the man in black. Soon Eleanor is embroiled in the dangerous world of power games, both secular and religious. Indeed, England’s future under a new king may offer hope and relief, but skeletons from the past can come back to life like those in the biblical valley of dry bones. Which had cause enough to kill?

Priscilla Royal grew up in British Columbia, received a degree in World Literature from San Francisco State University, and lives in Northern California. She is a member of the California Writers Club, Sisters in Crime, and Mystery Writers of America.

So glad I happened upon this series. well written and narrated.

Off to my next Medieval book.


I usually enjoy historical novels and with this being a murder mystery also I was eager to listen, sadly I found the narrator very bland not one character was memorable, the story itself was rather boring I didn't get any feel at all for the medieval period it was supposed to be set in.
My advice save your money.

If only the story was worthy of it narrator

Well the narrator was good, the pace of the story was sorely lacking. Such a shame since I bought another audiobook in this series and it was great.