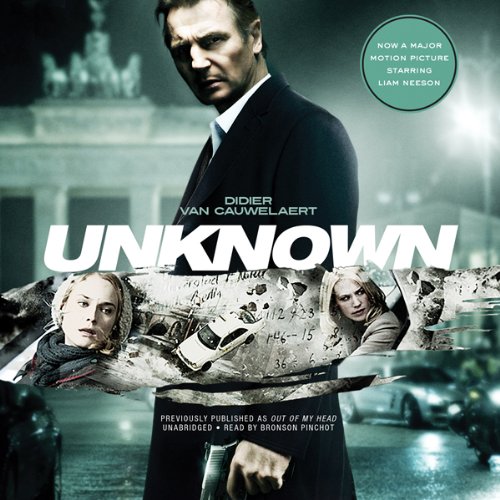 Unknown: A Special Edition of Out of My Head

Martin Harris returns home after a short absence to find that his wife doesn’t know him, another man is living in his house under his name, and the neighbors think he’s a raving lunatic. Worse, not a single person - family, colleague, or doctor - can vouch for him. Worse still, the impostor shares all of Martin’s memories, experiences, and knowledge, down to the last detail. He is, in fact, a more convincing Martin than Martin himself.

Is it a conspiracy? Amnesia? Is Martin the victim of an elaborate hoax or of his own paranoid delusion?

In his high-powered new novel, Didier van Cauwelaert, the award-winning author of One-Way, explores the illusory nature of identity and the instability of the things we take for granted. Dispossessed of his job, his family, his name, and his very past, Martin Harris is an Everyman caught in an absurd and yet disturbingly convincing nightmare, one that seems to have no exit and that resists every explanation. Part moral fable, part Robert Ludlum-style thriller, Out of My Head is a fast-paced tale of one man’s desperate attempt to reclaim his existence - even at the cost of his own life.

Cosa pensano gli ascoltatori di Unknown: A Special Edition of Out of My Head

Martin Harris believes he is the victim of identity theft. He awakes after being in a car accident that left him in a coma for a few days. Things are a bit fuzzy for Martin. He remembers who he is; the problem is that someone else thinks they are him also. But who is the actual Martin Harris? How do you prove you are you who you think you are when someone else has all the documentation proving they are you? Since Martin’s accident happened on the day he and his wife had moved to France, there are no neighbors who can vouch for him. Since he is married, the easiest way would be to ask his wife. When his wife says he is not the real Martin Harris he is left dumbfounded.

Convinced his wife is having an affair and this is just her way of getting back at him for being a lousy husband, Martin continues to try and convince people he is the real Martin Harris. As everything starts rolling in against him, he starts to doubt himself. But if he isn’t Martin Harris, then who is he and how did he get all of Martin’s memories?

I really enjoyed this story. I wasn’t sure if Martin was really Martin or there was some really weird scientific experimentation going on with this man’s brain. If he was really Martin then why would his wife deny it? If he wasn’t, then how did he get all the memories and what not? I wasn’t sure if the author was going to dip into the paranormal side to solve the mystery or not! This is one of these stories that even after the ‘big reveal’ I wanted to go back and listen to it again.

Narration Review:
This audiobook was narrated by Bronson Pinchot and it was the first time that I have listened to his narration. Since the story took place in France, most of the characters had a French accent or spoke in French. Bronson did an excellent job with all of his character voices giving them the much renown French swagger that you hear in the voices of the French speaking English for your convenience. During the dialog, he switched from the French speaking accent to the English speaking accent effortlessly. His narration is one that makes you forget that you are listening to only one person doing the narration. He is his own full cast!

Exceptional in Every Respect

If you could sum up Unknown: A Special Edition of Out of My Head in three words, what would they be?

What was one of the most memorable moments of Unknown: A Special Edition of Out of My Head?

Which character – as performed by Bronson Pinchot – was your favorite?

Thank goodness for great imaginative story telling. I was hooked in right from the start and just had to keep listening. With the incredibly strong narrative performance this was an absolute treat to listen to!

Voice acting was one of the best I have heard! Definitely brought the story to life! Awesome story!

Pinchot does a terrific job narrating this book. I can' t believe that's Balky! His vocal talent truly brings the story to life (and no, he doesn't sound at all like Balky). As for the story itself, it's pretty good. It's very Bourne Identity -like. Not very original, but enjoyable nonetheless.

This thriller had a strong story with good characters. I felt very sympathetic to the main character. I felt the action was a little rushed at times and, although the plot twists were great, there was one element of the ending that I felt was a bit contrived and standard.

So much French accent

I know it's based in France but jumping back and forth between the accents was distracting. I saw the movie and it was forgettable more or less like this book

Slow moving. To much rambling. Could have been a short story and been OK. But, still would not recommend.

What disappointed you about Unknown: A Special Edition of Out of My Head?

Said to be translated from French but accent was so strong it was difficult to understand.

I normally prefer non-fiction, so was pleasantly surprised to find myself totally gripped by this audiobook. I've listened to the whole thing in just three days. The story is well read by Bronson Pinchot, who brings the characters to life, especially the lead, Martin. Waking from a coma, he finds himself in a world where no one believes he is the man he knows himself to be, not even his wife. The story continues at a great pace up until the end. Highly recommended.

Intriguing thriller with a perfunctory ending

Where does Unknown: A Special Edition of Out of My Head rank among all the audiobooks you’ve listened to so far?

It's fine – an intriguing thriller, rather than an ultra-tense one, but with a premise that's worth sticking with. However, it's comparitively short, and the ending feels rather perfunctory.

What was one of the most memorable moments of Unknown: A Special Edition of Out of My Head?

There are several confrontations between the protagonist, Martin, and the people who claim not to know who he is – or who are beginning to doubt him – where the character's evident frustrations are most keenly felt. Also, the burgeoning possibility of romance between Martin and the female taxi driver who hit him, putting him in hospital in the first place, is quite sweetly and tentatively played out.

Bronson PInchot ensures that all the principal characters are clearly distinct from one another. In a story about identity, and what it means to be you, that's pretty important. And for a story set in France with a multinational array of characters, none of the accents feel out of place or mannered.

There's a scene between the hero, Martin, and the young son of the taxi driver that is incredibly sweet. It makes the inevitable twist that you know must be coming – because there's always a twist in these stories – that much more tantalising. You could just about swallow adults being betrayed – be it Martin's wife or his new lover, someon'e bound to get hurt. But a kid?...

This is a great thriller. I was attracted to this after I watched the film and as usual the book is always better. The narration was very good also, I would recommend this title.

Intriguing story with seeming blank walls at every turn. But who is he? Truly a mystery. Should keep you reading!

This story is so gripping I didn't mind the slighty exaggerated French accents. It has such pace that it just carries you along until it's thrilling finalé.

This is the first audio book ive listened to and.....Well the story was good but found the the Voice of the Narrator irritating to say the least.