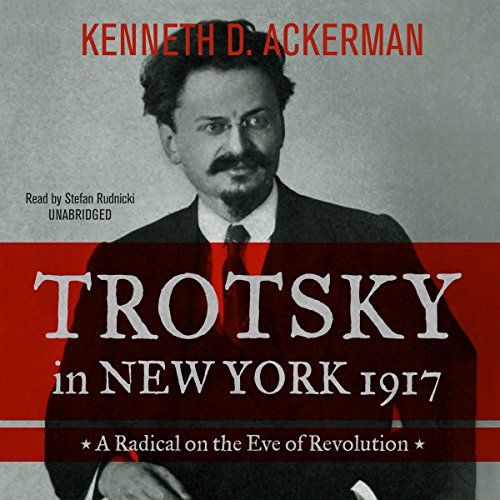 Lev Davidovich Trotsky burst onto the world stage in November 1917 as coleader of a Marxist Revolution seizing power in Russia. It made him one of the most recognized personalities of the 20th century, a global icon of radical change. Yet just months earlier, this same Lev Trotsky was a nobody, a refugee expelled from Europe, writing obscure pamphlets and speeches, barely noticed outside a small circle of fellow travelers. Where had he come from to topple Russia and change the world? Where else? New York City.

Between January and March 1917, Trotsky found refuge in the United States. America had kept itself out of the European Great War, leaving New York the freest city on earth. During his time there - just over 10 weeks - Trotsky immersed himself in the local scene. He settled his family in the Bronx, edited a radical left wing tabloid in Greenwich Village, sampled the lifestyle, and plunged headlong into local politics. His clashes with leading New York socialists over the question of US entry into World War I would reshape the American left for the next 50 years.

An unexpected link between Russia and USA

Coming from Russia, I knew quite a lot about Trotskiy and his role in the revolution, but I was surprised to learn about his time in USA and the influence he had here. I feel the author inflated the extent of his influence on the socialist movement in the USA (perhaps understandable, since the book is devoted to Trotskiy), but I’m curious not to learn more about it from other sources now.

Very well researched and written. I found it very interesting, especially the broader ramifications of the different actors in New York. However, as narrative goes, there's not much to work with in this time-frame. Trotsky is in America very briefly and there's only so much interest that can be had in such a brief and relatively unremarkable journey. That said, the author does a great job selling all that could be construed as interesting about it and it's implications.

I'm not personally a fan of Trotskyism but this is a great and entertaining book. I really enjoyed learning about his interactions with other famous revolutionaries or reformers of the time, Emma Goldman, Eugene V Debs, Hilquit, ect. I had no idea Trotsky was so connected to the American left at the time.

I enjoyed this book and the story told within. Worth the listen for anyone who is curious about the distinction between Lenin and Trotsky, and their philosophies,and how the seeds of the Russian Revolution were cultivated in NYC. However, and without offering any spoilers, the author’s conclusions with regard to what ‘might have been,’ are ridiculous.

I’ve listened to several hundred non fiction novels and this is hands down one of the best . Went thru it in just a few days. Plan to listen to authors other novel on Audible.

Another Book that Defines Communism

As Communist Russia still exist today, it still defines how cruelle it could be a system of governance. a Totalitarian design to the core as we have witness in most Communist states

The typical biographies of Trotsky end up focusing on his impact on the Russian revolution and his long-term battle with Stalin. This detailed examination of his very lively three months in the US + New York City in early 1917, and his torturous adventures with devious UK, Canadian, US, and Russian government agents during his trip back to post-Tsarist Russia in April 1917, is captivating. We are asked to imagine not only what Russia and the rest of Europe might have been like without his forceful presence, but also whether he might not have had a dire impact on US radicals of that period — deflecting so many of them into a lifelong fascination with Bolsheviki-type methods and attitudes that until very recently has doomed the socialist critique of American society to the political underground.

Enjoyable, niche for nerds but basic for newbies.

This really kept my interest while gardening, despite knowing little about Russia. The narrator had good prosody.

The Irony of Real Life

In 1917 Leon Trotsky, his common-law wife, and their two children arrived in New York and moved into an apartment in the Bronx. Trotsky had been forced out of Germany, France, Switzerland and Spain. World War I was in full swing and Trotsky was strongly opposed to the war, which he considered a war for the rich fought by the poor. The Allied powers feared that Trotsky’s opposition would destabilize tsarist Russia and force it out of the war and they wanted to keep Germany fighting on two fronts. Trotsky was relatively unknown but was committed to the overthrow of the Russian monarchy and the establishment of a communist state. He expected to be in New York for some time.

On arriving, he quickly threw himself into his work. He regularly wrote for a Russian language newspaper and contributed to many other papers. New York City was an amalgam of all of Europe. As an example, it had four daily newspapers in Russian, six in Yiddish, and three in German. As such, it was also a gathering point for the many revolutionaries who had been driven out of Europe over the recent decades and there were lectures and political meetings in various languages almost every night, which Trotsky took good advantage of. He gave speeches against capitalism and the war, though he barely spoke any English, instead speaking in German or Russian. He attracted the attention of the many Eastern European immigrants in New York at that time. He immediately threw himself into Jewish and socialist politics. He clashed strongly with many local leaders who understood that the best way to bring change in America was not through revolution but through a gradual process of changing people’s minds. He argued vehemently with local leaders over US entry into World War I.

America was one of the few countries that would take him at that and America was also in political upheaval. President Wilson had just won reelection promising to keep America out of the war and when he arrived the US was still neutral. But, in the short 10 weeks he was there, things changed rapidly and ended with Wilson declaring war on Germany.

And then came the news that the Czar had abdicated and a republic was being formed. Lenin was able to negotiate passage from his exile in Switzerland through Germany and Trotsky helped to organize a group of Russian returnees to all charter a ship together to return to Russia. He was waylaid by the British and held in Canada until the news got out and public outcry forced them to release him and he was off to Moscow to meet Lenin and organize the overthrow of the republic in favor a a new socialist state.

Trotsky was impressed with America. He was surprised that people could freely express their opinions publicly and even in writing without fear of arrest. He was shocked that they could strongly oppose the government. But, it was the dynamism and creativity that especially impressed him and he often talked about America afterwards. He predicted that America would soon become the leader of the world, replacing Europe. He later wrote, “The figures showing the growth of American exports during the war astounded me. And it was those same figures that not only predetermined America’s intervention in the war, but the decisive part that the United States would play in the world after the war.” He stated that, in the future, “all the problems of our planet will be decided upon American soil." He was impressed with America’s technology and science. “To have Bolshevism shod in the American way, that is our task!” The gap between him and Lenin grew and as Stalin’s power grew after Lenin’s death, Trotsky was sidelined and eventually exiled.

Ten weeks plus a few days. This book is the first book to focus on that time in America with, of course, plenty of background information to give the context that makes this understandable. Ackerman does an excellent job of putting it all together in a relatively brief package that both answers and raises so many questions and causes one to wonder what might have happened if he had stayed there even longer. This is a very interesting book for anyone who loves the little lesser known events of history.

Good but a lot of fillers

This is worthwhile, but there is a lot of what has has to be speculation about what Trotsky thought. or did. The book is best at the beginning and the end.

A Liberals view of Trotsky