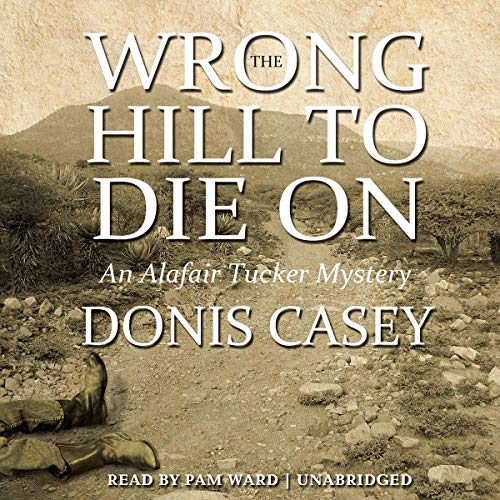 The Wrong Hill to Die On

The year 1916 was not shaping up to be a good one for Alafair Tucker, and finding Bernie Arruda dead in a ditch didn’t help matters.

Alafair had not wanted to go to Arizona in the first place. But her 10-year-old daughter, Blanche, was suffering from a stubborn ailment of the lungs, and her best chance for a cure was dry desert air. So Alafair and her husband, Shaw, had bundled their sick child onto the train and made the difficult trip from Oklahoma to the home of Alafair’s sister in Tempe, Arizona.

As soon as they arrived on that bright day in March, Blanche began to improve. And Alafair was overjoyed to see her witty, brilliant, beautiful sister Elizabeth again. Adding to the excitement was a Hollywood motion-picture company that was filming a movie on the streets of Tempe.

But Alafair and Shaw soon discover that all is not well in sunny Arizona. Elizabeth’s marriage is in tatters; tensions are high between the Anglo and Latino communities following Pancho Villa’s murderous raid on Columbus, New Mexico; and Alafair suspects her sister is involved in an illegal operation to smuggle war refugees out of Mexico and into the United States.

And now here is Bernie Arruda, lying on his back in a ditch, staring into eternity. The night before, he had been singing Mexican love songs at the party in Elizabeth’s backyard, his black eyes flashing as he winked at the ladies. He had been a charmer, all right - too bad there were so many people who would be glad he was dead. Alafair decides to find the culprit.

I look forward to the books in this historic mystery series because they are so evocative of farm and family life in early 1900s Oklahoma. To me, book 6 just was not up to the previous five books in the series.

Much of this difference was due to formatting. This book is very choppy--comprised of 104 (!!!) short chapters--some only 3 minutes long. I checked and the previous books all had an average of 8-10 chapters and the total book lengths were all similar. This format change really had a profound effect on the ability of the book to grab and hold the attention. The action and flow of the story are ruined by all the stops and starts and odd pauses and announcements for the endless chapter titles. Many of these frequent breaks make no sense in the story line and as such are unnecessary distractions.

Further, rather than Casey's usual fluid and smooth story telling we have many awkward flashbacks and uneven character development. The wonderful family interaction and varied and complex characters are missing from this installment. I found myself unable to maintain interest in the mystery and really couldn't care less who did what and to whom. This is a terrible thing to say about a mystery--I know and I am disappointed. I can't seem to bring myself to finish the book. The 2 star rating is only because I love the series--if not for that it would have been all one stars. I hate wasting my time reading rough, unedited drafts.