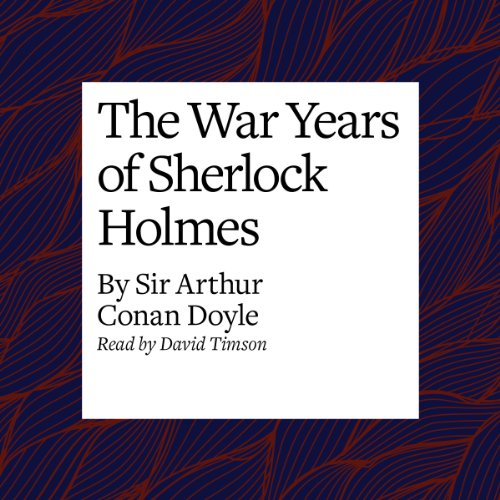 The War Years of Sherlock Holmes

This story is from The Reminiscences of Sherlock Holmes (His Last Bow) collection.

Further adventures by the master of observation and deduction, as faithfully recounted by his companion and greatest admirer, Dr. Watson. "The Adventure of the Bruce-Partington Plans," "The Disappearance of Lady Frances Carfax", and "The Adventure of the Dying Detective" are among the stories. David Timson's award-winning performances continue with this series.

Arthur Conan Doyle’s foray into the realm of international espionage, set during WWI and originally published under the title "His Last Bow", in 1917, marks a departure from his signature detective procedurals, as it involves two German spies, preparing to fly back to their home country with stockpiles of intelligence in hand, and their unexpected encounter with the advanced-in-age but shrewd-as-ever Holmes, who foils their seemingly well-laid plans in this absorbing audiobook superbly performed by David Timson, whose throaty, realistic depiction of the villainous German spies elevates this late-period Holmes novella.

that was all? only heard the end. not much to revi

If I am going to review a book, I need a book to review. Think I only got the end. Or is this a one chapter book?

What made the experience of listening to The War Years of Sherlock Holmes the most enjoyable?

Needless to say the story was masterfully recounted but I can't help but feel slightly miffed. Audible's description made reference to a number of other stories, perhaps within the same series and my expectation was that these stories were to be included in my purchase. This book only features one story and lasts less than an hour. It was nevertheless very well told and deserving of a 5 star rating. Thank you.

What was one of the most memorable moments of The War Years of Sherlock Holmes?

The 'War Years' give the impression, with a duration of only forty eight minutes, of having expressed a manifest desire for an expeditious return to peace.

If you could take any character from The War Years of Sherlock Holmes out to dinner, who would it be and why?

Does anybody ever answer "Sherlock Holmes" ? I like that there are tigers and they are magnificent but coaxing one out of their habitat with a proposition of dinner would be an act of tomfoolery. I might entertain the notion of dining with one of the hapless germans as long as they were accompanied by a gorgeous, unattached female blood relative and we got to eat German food.