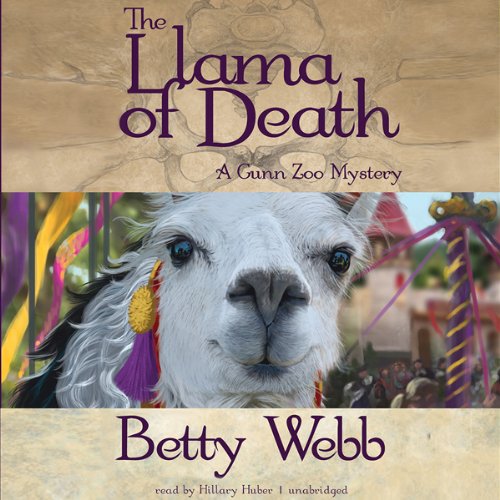 The Llama of Death

Theodora "Teddy" Bentley, zookeeper at the Gunn Zoo, takes the zoo's llama, Alejandro, to a Renaissance fair in the Monterey Bay area. That is where Teddy discovers the still-warm body of the Reverend Victor Emerson, owner of the local wedding chapel, dressed in his costume as Henry the Eighth. At first it appears that Alejandro stomped the man to death, but a closer look shows a crossbow dart in the man’s back.

Teddy’s investigation reveals that Reverend Victor wasn’t really a reverend at all but an escaped convict, which means that every marriage he performed in the past 20 years is null and void.

Teddy’s mother, Caro, a spoiled ex-beauty queen, becomes the chief murder suspect and is immediately jailed when she causes a riot in the courtroom. The "reverend" had twice married Caro to wealthy men, and when both marriages failed, Caro received large financial settlements that she may now have to give back - certainly a motive for murder.

But Caro wasn’t the only person gunning for Victor. The child of the man that Victor the convict once murdered may have wanted to kill him too. Then even Teddy herself is handcuffed and jailed. Even worse, Teddy’s embezzling father flies in from exile in Costa Rica to help spring Caro from jail, putting his own freedom in jeopardy.

As Teddy continues her investigation, she finds herself up to her ears in Renaissance fair actors and stuntmen, assorted animals, squabbling boat live-aboarders, and gang members.

©2013 Betty Webb (P)2013 Blackstone Audio, Inc
"Zookeeper Theodora 'Teddy' Bentley’s human relationships prove more taxing than her animal ones in Webb’s amusing third Gunn Zoo mystery…. Animal lore and human foibles spiced with a hint of evil test Teddy’s patience and crime solving in this appealing cozy." ( Publishers Weekly)
"Quirky characters and the zookeeper frame story add zest to this engaging cozy mystery that will appeal to fans of Donna Andrews' Meg Langslow mysteries." ( Booklist)
"A renaissance faire provides both the setting and the weapon for a murder…. Webb’s zoo-based series is informative about the habits of the zoo denizens and often amusing." ( Kirkus Reviews)

The latest Gunn Zoo is a light and entertaining cozy mystery. It's a fast-paced, interesting read with a solid plot and well developed characters. The insights into the zoo and exotic animals provide an a unique backdrop to the story. As always, Teddy is in the thick of things in order to solve the murder and save the day. This is a good series.

A superior book with animals!

Teddy Bentley gets dragooned into participating in the local Renaissance Faire, where she gives llama rides to children. The man playing King Henry VIII goes out of his way to insult Caro, Teddy's mother, leading to her uttering pre- Elizabethan threats at the Reverend Victor Emerson, who isn't a true religious man, just someone who runs the local wedding chapel. Later that night, Teddy hears noises coming from the llama pen and discovers the body of Emerson, killed with a crossbow bolt in his neck.

The problem is that Sheriff Joe Rejas, Teddy's fiance, is on the East Coast doing a Homeland Security exercise in which no one can reach him, and Homeland Security refuses to disturb him over a "mere murder." So due to a strange confluence of events, Joe's fifth in command, Elvin Dade, takes charge of the investigation, immediately destroying evidence in the process. What is worse, this man who grew up with Caro and stalked her in high school immediately runs to arrest the woman who got him in trouble as a teen. By the time Teddy gets to the jail, Caro seems more concerned about the fact that her mani/pedi doesn't match the orange jump suit. Then at her bail hearing, Caro shouts about the indignity imposed upon prisoners, getting herself a 30-day sentence for contempt of court. But things get especially sticky when the post mortem shows that the "Reverend" Victor Emerson was really an escaped murderer and thus not licensed to perform weddings. Since he performed ther weddings of most of the community, most of the couples are not truly married. This may have serious implications for Caro, whom Emerson married for two of her marriages to seriously rich men. Will she have to give back all her money?

Just as in the previous two books, I thoroughly enjoyed <strong>The Llama of Death</strong>! I had fun with the Renaissance Faire setting, as well as the fun details at the zoo. I learned more about llamas than I knew before and enjoyed the scene where Teddy takes a honey badger to the TV news show where she does a weekly segment on the zoo animals. We learn about more animals in this book while having a fun ride in the plot while watching the elitist Caro get to know her cell mate and determine to help the other women in the jail. The conclusion wraps up in as exciting and delightful a way as could be.

Webb does a great job of drawing her characters to make them seem realistic, and this includes her animal characters. I especially loved Alejandro, the llama, who seems almost human, yet is not anthropomorphized to appear to be human. We just sense that certain animals have empathy for others. I also really appreciated seeing the change in Caro as she learns to connect with others not of her social standing. And we really detest Elvin

I had a great experience listening to <strong>The Llama of Death</strong>. I loved the story and all the characters, both human and animal. I look forward to the next book, so look for my review of <strong>The Puffin of Death</strong> soon! I give this book five stars!

I'm enjoying this series so much I've already purchased and downloaded the next in the series. If you're a fan of cozy mysteries you won't want to miss this series.

I love, love, LOVE the Gunn Zoo series! Betty Webb writes an excellent tale - 3 times in a row! I also really enjoy Hillary Huber as the narrator for this series. If you're looking for good, clean entertainment from start to finish, you owe it to yourself to read this series!