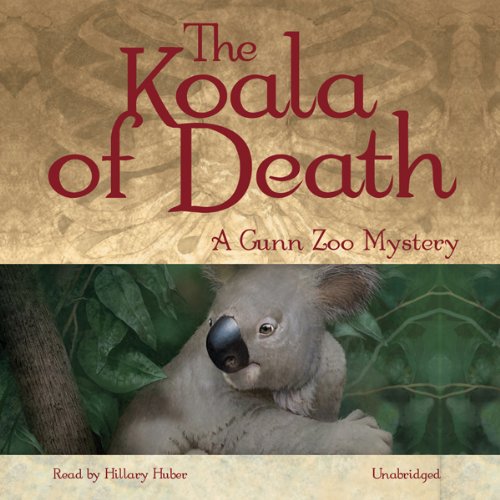 The Koala of Death

When zookeeper Theodora “Teddy” Bentley fishes the body of Koala Kate out of Gunn Landing Harbor, she discovers that her fellow zookeeper didn’t drown; she was strangled. The clues to Koala Kate’s killer implicate other animal keepers at the Gunn Zoo, including Outback Bill, marsupial keeper and Kate’s Aussie ex-boyfriend; and Robin Chase, the big cat keeper who’s got it in for Teddy. Also displaying suspicious behavior are a shady “animal psychic” and even Caro, Teddy’s much-married, ex-beauty queen mother.

Meanwhile, to pay for repairs on the motor on her beloved houseboat, Teddy agrees to appear on a weekly live television broadcast featuring misbehaving animals. Between a cuddly koala, a panicky wallaby, and a killer zeroing in on her, all hell is about to break loose....

I wish Audible had more of this series

This is a good series. I stumbled on to it late but I'm glad I did. The story presents a realistic plot with likable characters. The zoo setting is unique and gives the average reader insight to the workings of a zoo, as well as the animals who live there. The narrator does a good job of bringing the characters alive and giving them personality. I also like the development of Teddy and Joe's relationship. The author does a good job of showing their personal life without making it a central focus of the story. This is a very good book. If you have time to listen to it, you should give it a try.

This is a great series if you like animals and mystery. I really enjoyed the animal facts thrown in throughout the book. The characters are engaging. Perfect mix of adventure and mystery. Not overly gory even with murders. Book is well written and performed. Definitely recommend.

I love this series! Wonderful characters and entertaining story lines. I've already downloaded the next one - Llama of Death - and it's on my MP3 player! The narrator is completely enjoyable to listen to and makes the story. I highly recommend you give this series a listen.

A fun and interesting mystery!

Teddy the main character is a very interesting person and the mystery sucks you in well! Adding on all of the interesting information about the animals in the gunn zoo is a bonus! Definitely a recommended read for any animal lover and mystery fan.

One of my favorite series

This book is as good as I hoped it would be. With the setting of the zoo I’m happily along for the ride

I'm a fan of both Betty and Hillary

Betty Webb took time out of her busy schedule to come and talk to my assisted-living commuity. She was fascinating. Her stories her history, everything she talked about was very interesting. Our residents really loved having her. She's a wonderful person and I love her Gunn Zoo books.

Hilary Huber narrates books so wonderfully. I've signed out other books that she's narrated just because I really enjoy all the different voices that she gives the characters.

Betty Webb and Hillary Huber team up to have another great Gunn Zoo book. This series is a very enjoyable cozy/mystery with twists and turns, and lots of clean fun. I highly recommend this book.

In <strong>The Koala of Death</strong> by Betty Webb, Teddy Bentley wakes up one morning when she thinks she hears her sea otter friend bump up against the boat she lives on, the Marilee. But instead of seeing fur, she sees a dress and realizes this is the body of a woman. Though diving into the ocean to try to save the woman, the zookeeper nicknamed Koala Kate for her specialty in Down Under animals is dead.

It doesn't take long for the presence of Teddy's boyfriend, Sheriff Joe Rejas, to come around the zoo and start looking into Outback Bill, Kate's ex-boyfriend, who followed her from San Diego to Gunn Landing, on the California coast 40 miles north of Monterey. Kate was killed with a wire garrote before she hit the water. And Joe has decided that Bill killed her, arresting him. However, Teddy questions that he is correct. With pressure from Kate's longtime family friend who is certain of Bill's innocence, she ends up doing her own investigation. But she does so at her own peril.

I loved <strong>The Koala of Death</strong> as much as I loved the previous book, <em>The Anteater of Death</em>. This book has so much local flavor of coastal California, as well as life in the zoo. I learned a lot about animals, including the fact that koalas sleep 75% of their lives because the eucalyptus leaves provide so little protein, and they have to eat a pound a day just to get the little energy they do have.

There is plenty of humor toi this book as well. Over her objections, Teddy gets forced to take over the television segment thst Koala Kate had done once a week and has to deal with Annalee, a television anchor who shows disdain towards all her guests and disregards orders not to touch the animals. So she manages to let a wallaby loose in the studio in Teddy's first appearance, causing Teddy to have to chase the critter all over before she finally rescues the wallaby. This gives Teddy high ratings, forcing her to have to stick with her new job. In another episode, Annalee touches the lemur, who climbs on top of Annalee's head and then poops on her head!

We also have fun watching Caro, Teddy's mother, trying to set her up with a husband, starting with a total drunkard loser with a good pedigree. Then when Ford Bronson, a software giant who owns the television station on which Teddy appears, has his girlfriend elope with another man, Caro holds a party ostensibly for the socialites, but really to try to hook Teddy up with him. The party concludes with a knock-down-drag-out brawl between two female zookeepers over a male zookeeper.

<strong>The Koala of Death</strong> has a really strong plot that makes it exciting to listen to. Besides all the extra details that make the book clever and delightful, the murder mystery is fascinating. The solution comes across as a surprise, but most of the clues are not completely hidden, allowing Webb to play fair.

I also find the characters to be highly realistic, either making us love them or love to hate them. Caro is especially unique, and we see how her annoying actions that drive Teddy crazy come out of her genuine love for her daughter. We grimace with Teddy at the hostility of Myra, the great apes keeper. But besides the human characters, the female koala, who was raised by hand by a keeper when she was rejected by her mother and just loves to cuddle with the zookeepers.

I especially love the audio performance of Hillary Huber. In particular, I appreciate the voices she gives to each character, ones which seem highly effective. I was really impressed that she gave many women characters deeper voices, something that is very rare. Most performers give high pitched voices to female characters, and it was a nice change to hear lower voices. Huber uses strong expressions and timing, for example giving Zorah, the zoo director, a lower pitch and slower pace that suits her well. I really appreciated the performance of Hubert and feel that she makes this book highly enjoyable to listen to.

I had a great experience listening to <strong>The Koala of Death</strong>, which I turned to on a day when I needed something especially enjoyable to listen to. It certainly didn't disappoint and kept me highly attached to this riveting book. I thoroughly recommend this book toi anyone and give it five stars!

I loved, loved, loved this book. This is the first book by this author I have read or listened to but it most defiantly won't be the last, in fact before it even finished I was looking to see if there were anymore in the series, I loved it that much. The whole unusual setting of being based around a zoo was just delightful. I fell in love with the Koala (is it wrong to stay I want one?) The animal antics was so much fun, especially the tv segments and mishaps, it's worth getting the book just to be entertained by them. The fun animal fact was interesting too.As well as the great animals, I also liked the humans and the varied personalities, they worked well together. Even the mother daughter relationship, although strange (and I would find annoying) some how works and you know they care for each other. There is a number of characters and a lot going on in this story and at first I did get a bit confused but soon had them all straightened out especially as the author also gives you the name of the character and the animals they take care of.The mystery was also good and kept me guessing. Just a fun mystery that you don't want to miss.
Teddy is woken up by hanging on her house boat but it is not the playful marine animal like normal, instead of is fellow zoo keeper Kate. Teddy is assigned her zoo duties that of taking care of the animals down under, especially the Koalas but it is the tv appearances with live animals that cause her the most distress. Then her ex boyfriend is arrested for the murder and Teddy believes they have the wrong man. While out fin fund raising for the endangered rhinos Teddy can't help but investigate Kate's background in the hopes of finding some clues that lead to the killer. Things get more complicated when a second body is found and then somebody starts to target Teddy herself. Can Teddy unmask the killer or will she end up on the endangered list herself?
I liked the narrator. She had to do a number of accents for all the different characters involved in the story but it help helped to bring the fun and action to life.