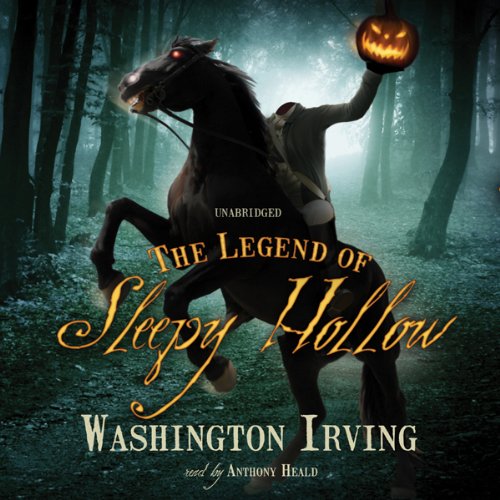 The Legend of Sleepy Hollow

In the Dutch settlement of Tarry Town, New York, in a secluded glen called Sleepy Hollow, Ichabod Crane arrives to educate the children of the region. This lanky schoolmaster from Connecticut fancies the idea of marrying the beautiful Katrina Van Tassel, the 18-year-old daughter of a wealthy farmer, but there is a problem with his plan. Abraham “Brom Bones” Van Brunt, the town rowdy, has already set his heart on marrying her.

This romantic rivalry climaxes one autumn night with the appearance of the legendary Headless Horseman, allegedly the ghost of a Hessian trooper who lost his head to a cannonball during the Revolutionary War. Every night he rides through the woods to the scene of the battle in search of his head.

Since this story’s first appearance in 1820, generations of readers, young and old, have thrilled to the headless horseman galloping through the haunted woods of Sleepy Hollow. The rollicking tale of Ichabod Crane and his ill-fated courtship of Katrina Van Tassel has become a classic ghost story.

Public Domain (P)2010 Blackstone Audio, Inc.
“[This story’s] unprecedented success allowed Irving to devote himself to a career as a professional author.” ( Encyclopedia of Literature)

A flawless combination of narration and writing. Anthony Heald brings out the meter, rhythm and nuance of this short but perfect text. Washington Irving would have been pleased.

The voice sounds a little like the narrator from Disneys Haunted Mansion. It's a great Halloween listen!

One of my favorites!!

I like to fall asleep listening to it, that's not to say that I do not find it engaging, I do! But the language is so comforting after about the third time around it is so relaxing.

One of my favourite stories! It was preformed very well! Beautiful, clean, and the perfect use of inflection.

Anthony Heald is one of my favorite Voices to listen to. He has a wonderful rhythm and range of characters. He brings this short story to life for me, I listen to him read it regulary because I know the story well and I can do other things as I listen.

I recommend this for anyone who wants to listen to a classic of Washington Irving.

This narrator is perfect in every respect.

And his voice really suited the story, which is great in its own right.

For the love of short literature.

I was unprepared for how short this story was, but I still loved it immensely. Short, dense, but easily digestible and the narration is brilliant. Nothing fancy but it keeps you interested.

A classic story performed by a great narrator.

Washington Irving is very descriptive as he paints a beautiful and vivid picture of the characters and especially the environment. The narrator Anthony Heald does a good job of making the tone feel old world leisurely. That is until the Sleepy Hollow legends become all too real.

I guess it's because I've seen some great adaptations of this classic story, but it just wasn't gripping. There's nothing wrong with it per se, but I doubt I'll listen to it again.