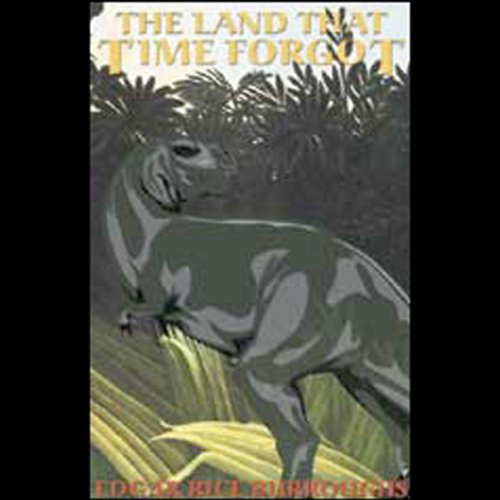 When adventurer Bowen Tyler is taken aboard an enemy submarine, he never dreams that his voyage will end in a land where time itself is prisoner. But in the uncharted seas at the bottom of the world, Tyler and the crew of the U-33 discover the mysterious forgotten continent of Caspak, where the savage denizens of a thousand lost ages roam vast primeval jungles.

Surrounded by dinosaurs and Bronze Age warriors, saber-toothed tigers and cunning beast-men, Bowen Tyler begins to unravel the incredible secret of Caspak, even as he battles to save the life of the woman he loves.

The Land That Time Forgot

This may have been an enjoyable book had it not been for the narrator, Raymond Todd. Todd reads with very little emphasis or emotion, but what is most irritating is his race to get through the book. Also, for a book that deals with ships and the sea, he mispronounces basic nautical terms such as ensign and gunwale. Thank goodness this book is only 31/2 hours long!

it's a lil racist tho

Can see him getting better in his story telling...

Saw many similar experiences with the Princes of Mars series,although this story was more refined..
Very much enjoyed it...

not a bad book

this was alright. too many dinosaurs not enough people and dialog to make it a

This is the first of a 3 book set and is the best of the series and the best of Edgar Rice Burroughs book I have read so far. I?ve read 6 of his 60 books, all in the last week, so his books are fairly short but agreeable and satisfying. They are fantasy and the science behind them is a little thin but they are full of action and daring, with a little romance. They are enjoyable to read. The reader is very good, professional and well suited to this book. A lot is left unexplained so you will want to finish the series.

You gotta love Edgar Rice Burroughs. He underperformed in life until, as a pencil sharpener salesman who spent his free time reading pulp magazines, he figured he could be paid to write ???rot??? at least as good as the ???rot??? he read in the pulps. And thus started the illustrious career of the man who brought us Tarzan, John Carter, and David Innes??? And who inspired a generation of fantasy and science fiction writers.

The Land that Time Forgot, a lost world story set during World War I, is the first in Burroughs??? CASPAK trilogy. It was originally serialized in Blue Book Magazine in the fall of 1918 and then published as a novel in 1924.

Bowen Tyler is on a boat that???s torpedoed and sunk by the Germans. He saves a beautiful drowning young woman who he immediately falls in love with (that???s always how it happens in these stories) and they end up on a submarine with several other Englishmen and several Germans. Eventually (half way through the novel) the story picks up when they land on a lost volcanic island that is inhabited by dinosaur-like animals and a few subhuman races that seem to be at different evolutionary stages.

Like many lost world stories, The Land that Time Forgot has beautiful scenery, scary animals, primitive humans, and lots of adventure. Also like many of these stories, the action is the focus of the story and the characters are only shallowly drawn. For example, the beautiful young woman who the protagonist falls in love with has almost no personality, yet Bowen knows immediately that he loves her and, as expected, he is called on to bravely save her life more than once (while her previously modest clothing is now in tatters). There are the usual issues with sexism, racism, and classism, but these are the things that fans of old lost world stories know to expect ??? I have never read one that didn???t contain these annoying elements. For readers who know what to expect, The Land that Time Forgot is fun pulpy adventure that???s sure to please.

I listened to the audio version of The Land that Time Forgot which was produced by Blackstone Audio and narrated by Raymond Todd. Todd???s voice is a bit mechanical sounding and he had a couple of mispronunciations (such as ???gunwale??? pronounced like it looks), but I sped him up a bit and was satisfied, though certainly not thrilled. I wouldn???t hesitate to suggest this title to audio readers, but I wouldn???t be recommending it for the performance.
Originally posted at FanLit.