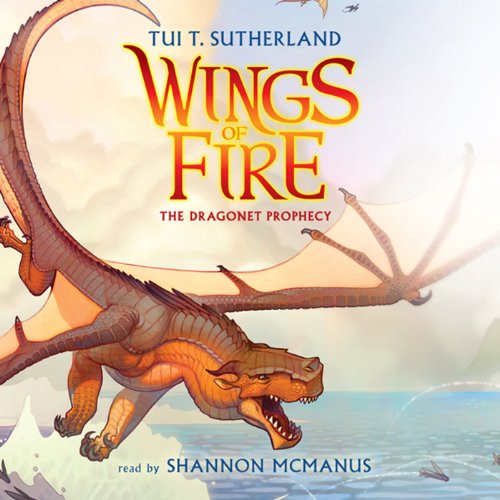 A thrilling new series soars above the competition and redefines middle-grade fantasy fiction for a new generation!

The seven dragon tribes have been at war for generations, locked in an endless battle over an ancient, lost treasure. A secret movement called the Talons of Peace is determined to bring an end to the fighting, with the help of a prophecy - a foretelling that calls for great sacrifice.

Five dragonets are collected to fulfill the prophecy, raised in a hidden cave and enlisted, against their will, to end the terrible war. But not every dragonet wants a destiny. And when the select five escape their underground captors to look for their original homes, what has been unleashed on the dragon world may be far more than the revolutionary planners intended.

Adult listening with 6y/o here. The Story is great and very fun to listen to. The narrator in this audio book has a very “Disney” sort of approach, which some may find nice, but we found distracting. Some of the valley girl vocal fry fades off as the book continues, however the fairy princess voice conflicts with a lot of the intense moments the author created. Great content, but wish we had decided to read the book aloud instead.

So my son has now finished the entire Wings of Fire series. And I thought that since he loved it so much I would listen to it and get some insight into what he was really thinking about these books. I was a little shocked at what we had let him read. He is a voracious reader, and finding the mix between content and level is difficult. These are very violent, and often quite sad. That having been said, the violence is amongst dragons who are well personified. You could easily forget that this is a fantasy world of dragons and think that you were listening to a group of young kids instead. The story is well told and I do not think that it is necessarily a bad thing that it is violent, it certainly is nothing compared to some of the video games his friends are playing (we don't do video games in our house really, it is tough to play what we don't own). So to wrap up - yes it is violent, and scenes like the aftermath of the mudwings battles when they fly over the wreckage toward the end of the book, are a little disturbing, I am still glad I let him read the books.

All feral characters, war, blood, death, dismemberment, lots of beastly creatures that want nothing more than to rip your face off, and serious adult themes without the boring obligatory sex scene. The world needs more animal fiction books like this. 5 out of 5.

Better than the cover suggests...

I have nothing against the cover, but it does suggest a more childish book than I what I got, which was good. It was pretty complex and didn't pull the punches I was expecting it to, which I enjoyed. These dragons were often cute, but they were also cruel.

Has a nice message of: The world isn't going to fair because you want it to be. You can accept it for what it is or you can do something about it.

I loved all the books but the fifth book is the best in my opinion. The narrator was good I feel like she brought out a depth to the series that the books just couldn't get.

I purchased this book off of the reccomendation from Emily of the @Snake Discovery YouTube channel. Awesome story and I will definitely be purchasing the rest of this series.

It's a miracle! My 10yr old is finally READING!

and cannot stop it. The story in fast pace and "thrilling" ! I bought the box set of first 8 books, but I couldn't get my son to read. I then bought the Audible for book #1. We started to listen on our way to school and home, then yesterday I "forced" my son to read the book along the Audible. OMG, he was really reading it and couldn't stop. He begged for one more chapter after another till I had to force him to stop (9:40 PM). I tried it with Magic Tree House before and he'd wandered off. I myself couldn't stop and cheated on my son. I listened to it all day at work yesterday even he told me to pause it after dropping him off. Interesting enough, I find myself resonate to many of the situations as a parent of 2 other teenage girls and now the twins are listening to it with their little brother. I just finished the book (1) and have already bought Audible for book 2 & 3 last night. Off to the next one now!

I loved this book.

If you could sum up The Dragonet Prophecy in three words, what would they be?

I think the plot was amazing.

The way she expresed the emotion.

Yes once I started I didn't want to stop

I cant wait for the 2end book to come out

Clay is the best

I've been interested in dragons for, like, forever. I always wanted to see them have better representation in media like games, movies, TV...and even books! Beyond the likes of stories about dragonslayers and fire breathing monsters. I wanted to see more intrigue and the struggles and lives dragons would have in a fantasy world. Or, heck, maybe even a modern one, that would be cool. This book absolutely scratched that itch, getting to see everything from a young dragon's point of view. I even really identified with Clay. He's a lot like me...loyal, protective, and kind hearted even to the point of struggling and worrying constantly over doing everything I can to make things better for others. Like him, I feel overly responsible for bad things, and always try my hardest to help everyone, even to the point that I get very upset when I feel I've failed. I saw this in him, and it really helped me get behind why he thinks the way he does. I got sad when he got sad, I was mad when other dragons were cruel... I really felt what he felt, and I just couldn't stop. I didn't stop listening at all, focusing only on this book all day long. And I loved every minute of it, and want more! I'm actually struggling to make the decision to slow down how I read this series while I continue to the next book, to plan for breaks and periods of reading so I don't wind up mentally tired like I am now. Long review short, the book was so good that I literally was unable to put it down until it was over. And even now I want to listen to the rest of the series all at once!

Very descriptive i have finally found a good Dragon book I read every book yes its not for your 5 year old child but it's epic their is war and blood but that's what makes it good I recommend at the age of 7+ I bet even 40 year olds will enjoy this!

This was the best book I've heard yet it had all the parts to a great story. Would 100% recommend to anybody loved it so much and it is 8:32 hours long so a long fun book for what you want to do when listening. Would recommend other book in the series such as The Lost Heir. Overall this is an outstanding book for it's price!

My 6 year olds review is ' I love the book, my favourite dragon is clay, can't wait to listen to the other ones'

This book is incredible I’m ten and I loved it. It is full of action and excitement perfect for people who loves fantasy

A brilliant first book, I’d recommend this book to anyone who likes big stories, I love it

This is a great book, and the Best narrated book i ever have heard! Looking forward to listen to the rest of the series.

Do not read this book

The perfect book for people who are looking for a soppy feminist book that will make you throw up. This book is not as bad as the others.