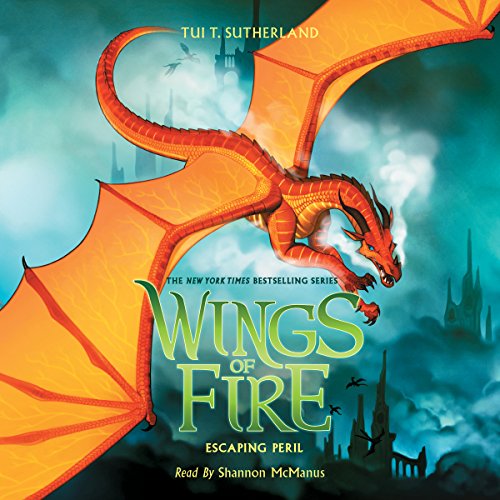 Peril has been loyal to Queen Scarlet, who used her fatal firescales to kill countless dragons in the SkyWing arena. Now Peril is loyal to Clay, the only dragonet who has ever been her friend. So when Scarlet threatens Jade Mountain Academy, Peril sets off to find her former queen, stop her, and save the day - no matter what it takes.

There's just one problem: A strangely persistent SeaWing, Turtle, insists on coming along, too. Turtle is worried about his friends, who left to search for Scarlet and haven't returned. Peril is worried that she might accidentally burn Turtle - or burn him on purpose, for being so annoying - and is frustrated that she keeps saying and doing the wrong things. She can't escape her firescales, and she can't escape her reputation as the deadliest dragon in Pyrrhia. So when she's offered a chance to trade everything for a second chance, Peril has to decide who she's really loyal to...and whether her own scales might actually be worth saving.

Alternate title: How To Make Up For 2555+ Murders

Peril's story is incredible and, at times, incredibly disturbing. In this book, Tui T Sutherland takes the opportunity to cement herself as a veritable Queen of Characterization; Peril goes through two personality changes while we're in her head and each one FEELS distinct. Some writers can't even pull this off for entirely different characters, so good on you Tui T.

It did feel like this continued for a few chapters after its ending but the real ending - or should I say Legitimately Terrifying Hook To Make Me Buy The Next Installment Oh My God - made up for it.

I liked the exploration of Peril's condition and everything that entails, though I'm still left wondering what would happen to her if an IceWing shot ice breath right down her throat. Would that help? Maybe? And it's pretty entertaining to watch Peril, with her warped sense of right and wrong, try to make good decisions. Like "no, sweetie, that's not right at a- and she's doing it. nice." You understand why she is this way and, even though you root for her, it's something of a spectacle to see the growing pains as her character develops.

And yeah, the narration on this was excellent again. That's especially evident when we get to hear Moon again after the whole thing being in Peril's voice. Distinct voices for distinct characters; the author and performer were matched pretty well with these books, I think.

I can hardly wait to read the next one!

The one about my favorite Skywing! Peril!

This is a great book with a great reader. This series is a like a young adult Game of Thrones, but with a great moral on and working together.

Finding Peril at every twist and turn

I have always struggled with liking Peril. I sympathize with her as she struggles to form connections with others and her upbringing. however having a book from her perspective definitely brought me even more to her side. She has really been dealt a bad hand in life and this book just keeps on giving it to her. All the things that happen in the last couple of chapters make me want to keep reading and see what happens next. The earth has shaken and so the prophecy has begun.

I loved the entire book, though I thought the prologue was a little long. I also loved the narrator, she was amazing and all the voices were great. Peril was the best protagonist I thought, and Ruby I thought was the best queen ever.

this series has managed to keep up it's quite even 8 books into the series. terrific book. terrific series

So awesome ，great！
Ｙａｈｏｏ！！！
I like ｉｔ so much，yay!
I recommend this to everyone!
Thanks!

This is the best book series EVER!I love it!I can’t wait for The poison jungle to come out!

I have something to tell you Patrick you stuck up f**k this book is epic and if I where a dragon I would eat you.

Great best of the searys!! I love it . I think it was realy cool! -Loving this book😁😁😁

the book was fantastic, it left on a Clif hanger which I thought was sensible. It reviewed secrets and information from the last book. of course, it is book eight, so read the others first!