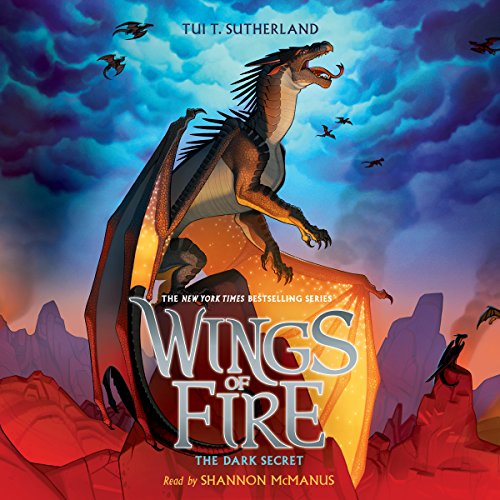 The Wings of Fire saga continues with a visit to the mysterious land of the NightWings, where Starflight must face a terrible choice - his home, or his friends?

The dragonets of destiny are on their way to see the NightWings - and Starflight doesn't need his psychic powers to know it isn't going to go well.

Starflight knows it's his duty as a NightWing to convince the other dragonets to choose Blister as queen. But he can't help feeling that there's something Morrowseer and the other NightWings aren't telling him, something that could put his friends in grave danger. While other NightWings have their powers to help them, Starflight has to rely on his brain - and with SkyWings chasing them and Queen Burn on their tails, that might not be enough.

the story was great. the reader was spetacular. i felt immersed in the story. it was just a epic tell cant wait to lesson to the next one

Wings Of Fire The Dark Secret is amazing . The story is so detailed. I love this book. I give this story 5/5.

That’s a 10 out of 10 smack down
This book is great I might be 9 but this book is so good I feel like in a different world the detail is there too congrats Tui T. Sutherland Shannon mcmannos did great At narrating this book! 👌👌👌😍😍😍😍 and this is no cheesey book right here this stuff it real UwU so hav a guy life le hoomans OwO

As we all know, the book is about Starflight. Don't get me wrong, I love Wings of Fire, and I love every single book. And I love every single character, even Starflight. But I have to say I loved him more before I read this one. There wasn't much action until the very end (No spoilers). Starflight spent most of the time worrying about everything and fretting constantly about Sunny and once again, pretty much everything else. It was very different from what I'm used to from Wings of Fire. It was kind of distracting, and it was hard to pay attention when all I could think was "Oh, Starflight, if you could, please stop whining and do something with your life." But I do love this book. It's just not my favorite Wings of Fire book. Thanks for reading my review.

continuation of the Dragonets adventure, I'm never able to predict what will happen next as the characters learn, grow, and become better people- er... dragons. the author stays on track but throws unexpected (yet perfectly plausible) things at the reader. I usually hate romance in stories but the love shown is mainly realistic and always furthers the plot. good read overall

I like all ur books 📚 I’ve read them all and really understand it more than most people . I didn’t. Red the behind the seems legends and stuff to understand I. Are theories and there always correct and when is the 15 book coming out I know ur working on a new legends book now

I recommend this for everyone who likes dragons. But, I do suggest to get or read the books before this one, because a lot of the older events are mentioned. So, it might be confusing for people who didn't read books 1-3. But the book, as always, is very recommended. And it was great too.

it was awesome. I loved the word choice and the story was incredible as always.

I loved the nightwings secret it makes so much sense, but I didn’t suspect it at all and the narration is so clear and easy to listen to, I love all of these books, but out of the prophecy dragonets books this is my favourite one