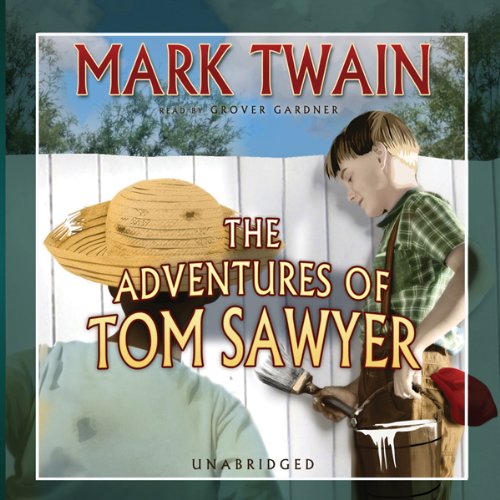 The Adventures of Tom Sawyer

This humorous and nostalgic novel takes the listener back to the carefree days of boyhood in Hannibal, Missouri, where Mark Twain grew up.

Just what did boys do in a small Midwestern town during the mid-1800s, a time when there were no televisions, no arcades, and no videos? They whitewashed fences, floated down rivers, traded marbles, formed secret societies, smoked pipes, and, on occasion, managed to attend their own funerals. Yes, they may have been a bit mischievous, but as Aunt Polly said of Tom when she believed him to be dead, "He was the best-hearted boy that ever was." Aunt Polly's sentiments reveal one of the cardinal tenets of Twain's philosophy: In this deceitful and infirm world, innocence can be found only in the heart of a boy.

A classic worth listening to!

What does Grover Gardner bring to the story that you wouldn’t experience if you just read the book?

A couple of my kids were reading Tom Sawyer for a book group, and they were having trouble with some of the slang and antiquated language. I purchased the audiobook for them, and it's much easier to understand this way than to read written words like "yaller" (yellow) and "off'n" (off of).

Audible has quite a few different versions of The Adventures of Tom Sawyer. I picked this one because Grover Gardner was the narrator. I knew he wasn't bad, and there's nothing worse than a bad narrator. I actually liked his reading of Tom Sawyer better than I like his reading of the Vorkosigan Saga! His voice and inflection are a great fit for the story. If you're not sure which audio version of Tom Sawyer to purchase, I recommend this one.

Sometimes classic books feel stiff or slow due to the changes in writing style. Tom Sawyer doesn't. It feels like someone could have written it yesterday. There's plenty of humor in it and a plot that keeps moving... with a few interesting detours. I never read Tom Sawyer in school, and I'm glad I did so now.

My kids and I listened to Tom Sawyer together. Every time we had "dead air" we would all shout "Tom Sawyer" and grab the iPhone and listen. They loved it, I loved it (again--it was a favorite growing up) and we continue to talk about Tom and his shenanigans.

The performance was excellent--loved the accents and the personalities that were expressed by the reader.

A Wonderful Classic with the Best Narrator

I originally bought the version of this book that was narrated by Wil Wheaton. After three chapters of listening to that version I was horribly disappointed, and frankly didn't have any interest to listen to the remainder of the book. At the time I bought it I did listen to the sample narration, but there was very little sampling of the different characters' voices. Wil Wheaton is such an extraordinary narrator I thought I couldn't go wrong by choosing his version. As mentioned above, I was so wrong. This book requires someone who can bring these young people alive, and with believable voices read in such a way that it becomes the gem of a story that it truly is.

After my disheartening experience listening to Wheaton, I was determined not to give up on experiencing this story, which I remembered reading as a young person, and hoping to enjoy it even more as an adult. So… back to the available versions I went, but this time, after having listened to some of the story, so poorly narrated, I spent much more time listening to every sample of the narrators, hoping to find one who could do these characters justice. When I came across Grover Gardner I knew he could be just the ticket.

One thing I noticed immediately, while listening to the sample narration, was that the story had sentences in it that were not in the little bit of the book I had been listening to read by Wil Wheaton. Comparing the length of the two books, (and I don't know how I could've missed this the first time around, other than I depended upon Audible to label the book either abridged or unabridged,) it became obvious that the version read by Wheaton was abridged! Not only was it abridged, but some really wonderful content had been left out! I returned the book with Wil Wheaton as the narrator, and purchased the one with Grover Gardner. I am almost finished with my new version, and oh… what a wonderful story, read in such an engaging manner that it is thoroughly entertaining. Grover Gardner gives the characters' dialects and personalities in just about the best way I can imagine this difficult story could be read.

I STRONGLY urge you to choose this version, and get ready to listen to this classic with the brilliant wit and humor of Mark Twain, and be prepared to laugh out loud while listening to this terrific story of the enduring character, Tom Sawyer... then, when you are finished, and are craving more fun, you have The Adventures of Huckleberry Finn to look forward to. Fortunately, there is a version of this book also read by Grover Gardner. ENJOY!

It's Good to be a Kid Again

Twain said that part of his mission in writing Tom Sawyer was to remind adults what they once were themselves. Score one for Samuel Clemens! The book's now an American classic, and I first encountered it as a kid. Revisiting it years later was a blast. It made me want to call the old gang up so we could become pirates and outlaws and treasure hunters all over again!

Listening to a performance like Grover Gardner's certainly doesn't hurt - he's got a classic voice that's great for reading and broadcasting. Very easy on the ears.

What made the experience of listening to The Adventures of Tom Sawyer the most enjoyable?

Grover Gardner. He is brilliant and brings all the characters alive

Yes, I am listening to 'Rise and Fall of Third Reich' where he is equally brilliant.


Wish I would've read it long ago. What great storytelling!! Highly recommended. Really makes you appreciate the language of that time.

caught myself fading in and out at times but overall was a fun story and the narrator was great.

What made the experience of listening to The Adventures of Tom Sawyer the most enjoyable?

Tom and friends take you on a trip with comedy, excitement and sadness.

What was one of the most memorable moments of The Adventures of Tom Sawyer?

Tom and Hucks relationship seemed familiar as I suspect it will to most.

The subtle and not so subtle accents were delightful.

Fun to listen to.

While huck Finn is my preferred story of boyhood, the narrator made these classic scenes enjoyable.

Tried three other versions but none as fantastic as Grover Gardner’s performance and cadence. He channels Twain.

It is one of my favourite books ever!

Love it, a complete, adventures story by Mark Twain.
This whole story was one of the most enjoyable story I've ever read!