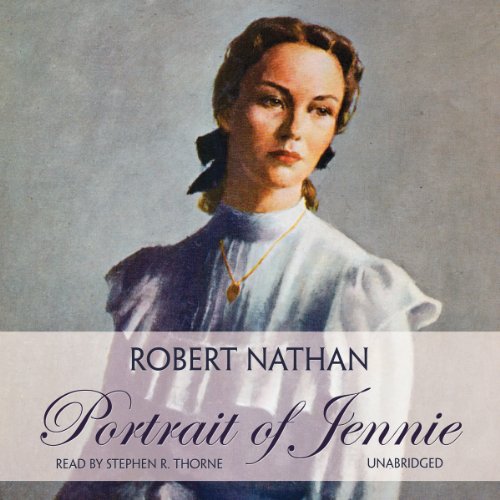 Eben Adams is a young painter in Depression-era New York just looking to make a living. His work has thus far left influential art dealers unimpressed. Then Eben happens upon a young schoolgirl named Jennie in Central Park. Intrigued by her mystical quality and her knowledge of things that happened well before her time, Eben begins to sketch a portrait of the young girl. The drawing turns out to be the most emotional piece Eben has ever done, and he finally gets the boost in his career he's been seeking. But before he can finish the portrait, Jennie vanishes.

Saddened by the loss of his muse, he begins to scour the city for her, and when he does find her again, he is shocked to discover that she has aged several years since their last meeting. Who is this girl, and where did she come from?

This supernatural love story is a masterpiece of modern fantasy.

Hate to say it The Movie is Better

This is a classic story by Robert Nathan which I first read it in High School Lit.and liked it for the unusual story line(at the time)
Then I saw the movie and LOVED IT.I believe Robert Nathan did the screenplay and really improved on his own story.The music by Debussay was haunting. However this audio book was spoiled by the narration. The voice did not fit. I thought I was getting Stephen Thorne (who has a deeper, more suitable voice for this book) and it is Stephen R Thorne????
It is still worth the listen though.,afterwords see the movie!

This was one if my favorite movies because of the 2 leading stars, but a dissatisfying love story. I was hoping the book would correct the unnecessary anguish in the plot. There are some beautiful scenes, but the illogical undeveloped concepts brushing time travel or alternative universes are too blatant to get lost in the love story. I have never found Nathan ability up to dealing with the messages he attempts ..
a shame.

I saw the 1948 movie a long time ago. (20, maybe 30 years ago? At some time in the distance time becomes abstract.) I never forgot the movie, as it stayed in a current part of the brain.

During the pandemic, wondering what to do next, I looked up the old movie and saw it was a novella. My credits were building up, so on an impulse I bought it. I was glad I did.

It was fun and different to read a book written in the 40’s for the 40’s. That made it a bit more fun and unique. The story is short and goes fast. Well read as well.

Often I find that a narrator does not capture my sense of a book. This narrator is is EXCEPTIONAL. Wonderful! Worth your money.

I loved the story.

I was intrigued and not disappointed. a very wonderful story throughout. I was not able to anticipate the next events. the ending, though sad, was fitting for the story. I highly recommend this for all ages.