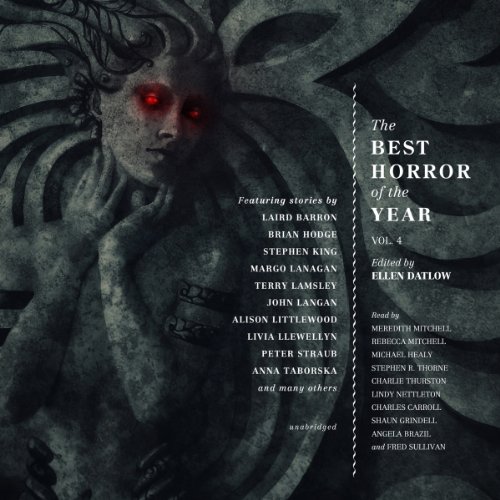 The Best Horror of the Year, Volume 4

The first three volumes of The Best Horror of the Year have been widely praised for their quality, variety, and comprehensiveness.

With tales from Laird Barron, Stephen King, John Langan, Peter Straub, and many others, and featuring Datlow’s comprehensive overview of the year in horror, now, more than ever, The Best Horror of the Year provides the petrifying horror fiction readers have come to expect - and enjoy.

Only a few decent stories in this bunch.

A mixed bag here. I gave every story a chance, but if I wasn't engaged withing the first five minutes, I skipped to the next one. Several engaged me:

In Paris, In the Mouth of Kronos John Langan (abandoned after twenty minutes)

Little Pig Anna Taborska (listend all the way through and enjoyed)

In the end, I only finished two stories: King's The Little Green God of Agony, which wasn't one of his best, and Anna Taborska's Little Pig, which was the only story in the whole bunch that I actually enjoyed entirely.

I almost made it through Peter Straub's Ballad of Ballardm, which was very engaging and narrated extremely well, but after awhile it meandered and I realized I didn't care about either character or their situation, so I bailed.

Would you ever listen to anything by the authors again?

I'd give every one of these authors another listen. Some of this was just bad storytelling, but some of it was stiff narration too. For the worst of the stories it's hard to lay the blame completely on the author or narrator's shoulders.

Some narrators were fantastic. Others sounded stiff. As if they were trying so hard to pronounce everything so perfectly that their narration had no natural cadence.

If you could play editor, what scene or scenes would you have cut from The Best Horror of the Year, Volume 4?

I would have scoured the volumes of Cemetery Dance and Nightmare Magazine, and Dark Discoveries from this particular year and come up with a much better list of Best of Horror.

It was pleasant to discover the one decent story (Little Pig), but not worth the effort of slogging through all the others. I'll be returning this one.

The performances are excellent, but the stories themselves are the most boring, least frightening "horror" stories I've heard in years.

What could the authors have done to make this a more enjoyable book for you?

Better editing, I suppose - these stories are not "horror" as I use that word, they are, as best, moody & atmospheric.

This just wasn't what I expected I felt like the stories always seemed flat at the end and I was just left sitting their thinking " Wait..what?" once I had gathered my thoughts I felt unsatisfied with how things ended like I still had questions but not in the eerie kinda fun way..The narrating was good for some stories and boring on others. There were some stories that I really really enjoyed and others I was to bored listening to recall. I finished the whole book so obliviously it wasn't terrible but it just wasn't for me...

Just fell a little flat for me

What disappointed you about The Best Horror of the Year, Volume 4?

Some of the stories were riveting, but some were just plain old weird for me. I was surprisingly not satisfied with the book overall. It is an acquired taste. I love Stephen King and was looking to get hooked on a few more horror novelists...alas I will stick with who I am familiar with. His story was decent.

ALL the narrators were phenomenal.

If you could play editor, what scene or scenes would you have cut from The Best Horror of the Year, Volume 4?

The only ones I would keep would be "Little Pig", "Green God of Agony", and the one about the incestuous family.

The title of the book gets you interested in listening to it. But after your done, it seems like more of a sad comment on the genre for that year. Almost every story in this book was instantly forgettable (including the Stephen King story), and while they can all qualify as part of the "Horror" genre, none of them gave much of a thrill beyond a momentary instance that might have been well described. But those instances get lost in over long stories that go nowhere. I can only think of 3 stories that held together well as a narrative and only 1 of those 3 that was even worth the time to listen, barely. The scariest thing about this publication as that it will steal away valuable time you can never get back.

Would you try another book from the authors and/or the narrators?

Would you recommend The Best Horror of the Year, Volume 4 to your friends? Why or why not?

Absolutely not. The stories were lackluster, some just far too long with little to no payoff, no real emotional involvement possible and some of the narrators were perfectly awful. No inflection, monotone...just ugh.

Uncertain. Someone who was willing to invest something of themselves into some of the readings instead of people who sounded like they had better things to do.

What character would you cut from The Best Horror of the Year, Volume 4?

There were a few good stories, but like everyone else has been saying, when most of them end you are just lost/disappointed.

The Best Horror of the Year??

What disappointed you about The Best Horror of the Year, Volume 4?

A couple were okay (King & Straub) but the rest were not very interesting much less scary. I agree with one of the other reviewers that the stories fell flat.

The only reason I kept listening is because I was hoping the next story would be good…NOPE!

I like to think I have a pretty broad range of taste when it comes to horror. I'm as enthralled by M.R. James as I am by the likes of Edward Lee or John Skipp & Craig Spector. My personal favorites (other than King of course) are Ramsey Campbell and Robert Maccammon. Yet here I am again with yet another Edith Daltow dud packed with stories which barely qualify as horror by my standards. A few are flat out incomprehensible. The term which leaps to mind is 'artsy'. Edith Daltow is Lucy with the football and I'm Charlie Brown. I see 'horror anthology' and come running. If a story can't be nail-biting fearsome I'll settle for eerie but don't even get that. And on a minor note could we get a printed table of contents somewhere - anywhere ?

Oh dear, what a disappointment.....

I can't give a full review of this title, because I couldn't get past the third story. For all I know, everything after that may be utter genius, but I was so bored after the third story that I gave up.

The initial story, by Stephen King, starts promisingly enough, but degenerates into almost laughable shlock horror. I miss the old Stephen King, who wasn't just phoning his stories in.

The second, while interesting to begin with, due to its setting among the First Nation peoples of the far northern Americas, lost my interest mainly because too much remained unsaid - I felt I was expected to be shocked, horrified and so on, but hadn't been given enough information about the culture to allow me to understand the nuances of what was happening.

The third, set on the hills of the Lake District, had a lot of promise. As I listened further, however, I found the characters rather two-dimensional. For example, the number of sentences which consisted solely of a single swear word left me feeling that the author couldn't think of any other way in which to convey the characters' emotions.

It may have been more enjoyable with a better reader - the person reading this story had a terrible sing-song style which alienated me even further. It gave the impression that the narrator didn't really care about what was happening to him and his companion, because every sentence sounded as though he was shrugging while saying it.

Would you try another book written by the authors or narrated by the narrators?

I would try other work by some of the authors, but run a mile from a couple !
The story by Simon Westick about mist on the moor was absolutely dire, and the narration even worse!
I have, however, now discovered Livia Llewellyn who has a story in this collection, and although it's graphic and shocking, it's at least introduced me to her work.

The imagery was amazing. It's not an easy story to listen to but stick with it.

Do you think The Best Horror of the Year, Volume 4 needs a follow-up book? Why or why not?

I think a follow up book would be a good idea for showcasing new talent, but shouldn't have poor quality stories from more famous authors just to lure the reader into buying.