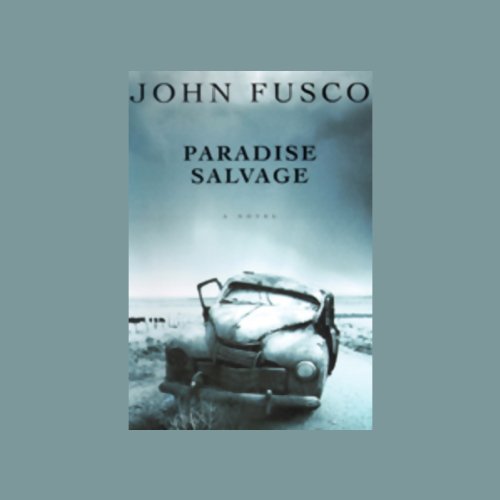 In his tantalizing debut novel, Paradise Salvage, at once a taut thriller and a lyrical coming-of-age story, John Fusco marvelously traces the unforgettable trajectory of 12-year-old Nunzio Paradiso's last summer of innocence.

Each new wreck towed into Paradise Salvage is a desultory gift from Fortune, a random opportunity for discovery. Sometimes it's a handful of loose change under the upholstery or an old copy of Vue magazine with a Betty Page centerfold under the front seat. But on a hot summer day in 1979, in the trunk of an abandoned Pontiac Bonneville, Nunzio uncovers a secret that will change his life.

In the blink of an eye, all evidence is lost to the crusher, and only his older brother Danny Boy believes Nunzio's story. Enlisting the help of his father's renegade cousin, an ex-cop with a dark history of his own, they embark on a bizarre and dangerous journey that proves to be as much one of personal discovery as an unraveling of the mystery behind the corpse at Paradise Salvage.

A story of innocence lost and justice found, of ambition frustrated and dreams realized, and the difference between generations of a family struggling to reconcile the traditions of the past with the demands of the present, Paradise Salvage glows with heart and marks the debut of a gifted storyteller.

"The story...brims with suspense, adventure, and Italian-American culture." (AudioFile)

Who thought junk could be so endearing?!

Hard to call a book with "salvage" in the title sweet, but this book is just that. It is a summer in the life of a twelve year old boy, his first spent working in the family business, and a coming of age tale to be sure. It could be set in any of thousands of communities, so can speak to many kinds and ages of people. Odd ball characters who do the strangest and funniest things, relatives you'll both know and wish you could have dinner with on Sundays, and a lovely growth in the relationship between two brothers. This is NO junkyard book. A recommended read.

This book was a wonderful story and I did not want it to end, but the ending was complete and satisfying. My only complaint was that the narrator did not have a Scottish brogue, but rather an Irish brogue. My Mother is Scottish and the wrong brogue was distracting to me.

I took a chance on this title because it was on sale. I truly enjoyed this tale that is so different from the types of books I usually listen to. The story was engaging and often funny, you really felt for the characters. It was well narrarated and well worth the listen.

This is a great book.

I don't want to say too much because it's an enjoyable story and I didn't have a clue when I took a chance on it and I think that's the best way with this book.

I really liked this book. I don't know if just resonated with my personal history, (I grew up on the upper east coast near a salvage yard) or if it was the time period,(set in the past approx 20 years)or what but the story really clicked. The author got it exactly right.

This is my first 5 star rating.

I hope you enjoy it as much as I did.

Really a well told story. One of my favorites! I would recommend it. I loved the narrator, he did such a wonderful job.

Loved the characters in the story, very interesting and amusing. Had my ipod on every chance I got and was sorry when it ended, I wanted more of the Paradiso family.

I thoroughly enjoyed this book. The narrator enriched the story with his use of accents. Highly recommend it.

Obviously many have found this audio book to be very entertaining and worth the time/money. I, unfortunatly am not one of them. I thought the plot was boring and slowly developed. The characters were flat and not appealing. I'm really not sure what others found so appealing about the book.

If you're hoping to find character development, engaging plot, unpredictability and a way to make the hours fly by, try something else. This is none of that.

Psychologists that study laughing generally assert that laughing is a response to social situations. This means that normally people only laugh when they are around other people. So if an audiobook can make you laugh out loud whilst you listen to it by yourself there is something truly humorous in its content. Some of the anecdotes in this book had me laughing out loud. I hope you find it as hilarious as I did. This is why the book is a must listen. It is also a good coming of age story.

Hey! I know these people!

You'll feel like you've lived next door to this family for years. The characters are real and knowable. A-plus for character development.

The story-line is a little less great. Kind of predictable, not completely suspension-of-disbelief-able, but not too terrible. Just okay. But the characters make it worth it. I believe this is a new author (though I could be wrong) and look forward to seeing more from him as his storytelling skills grow.