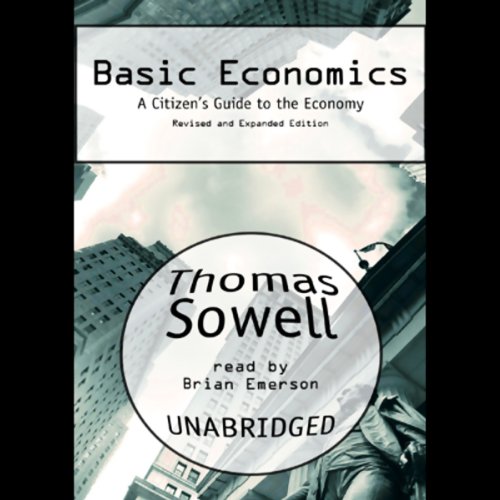 Basic Economics has been written with the thought that learning economics should be not only a relaxed experience but also an enjoyable one.

This is the revised and expanded edition of a new kind of introduction to economics for the general public, without graphs, statistics, or jargon. However, the enlargement of this edition is not just more of the same. In addition to being updated, Basic Economics has also become more international, with the inclusion of economic problems from more countries around the world, because the basic principles of economics are not confined by national borders. Each chapter reflects the experiences of many different peoples and cultures.

"Clear and concise....Among economists of the past 30 years, [Sowell] stands very proud indeed." (The Wall Street Journal)
"Basic Economics is not only valuable for a general lay-person audience, it would also benefit lawyers, politicians, and, yes, economists, as well." (Washington Times)

could have been shorter

Though the things the book discusses are interesting, I feel the contents of the book could have been covered in 1/3 of the time. The authors keeps saying the same thing in several different ways... Probably an abridged version might have been better... but I still dont regret listening to it as it made the fundamentals of economics -- atleast the free market economics clear.

Not Really what I Expected

I was hoping for an unbiased book that would just go into the basics of economics. This does cover economic concepts but only as it relates to how great unregulated capitalism is for everyone. While this may be true, and I am not arguing one way or another, I was more interested in learning about economics without a slant (liberal or conservative) so I could form my own opinions.

Overall, this is not a bad book. Just wasn't what I was looking for or expecting.

I recently started a Master's program in public policy and have become interested in economics. In class, I felt like I was learning the details without understanding the big picture, and I wanted to get more background information about the main schools of economic thought. When I read the reviews for this book, it seemed like conservatives loved it and liberals hated it. I tried finding a book that had more balanced appeal and couldn't find one, so I decided to listen to this one to get a better understanding of the economic orthodoxy and then to listen to Ha-Joon Chang's "23 Things They Don't Tell You About Capitalism" to get the opposing view.

As for this book, first of all, the narrator is insufferable. He comes off as a pompous know-it-all. He never stopped irritating me, and it is a long book. However, what he was narrating was interesting, so I gritted my teeth and kept going.

Thomas Sowell has managed to write a very clear and easy to understand book about economics. He is very convincing on some topics. He thoroughly convinced me, for example, that rent control is a bad idea. Also, I work for a nonprofit, and his analysis of the incentives in the nonprofit sector made me chuckle: they sounded very familiar.

At the same time, his analysis occasionally struck me as oversimplified and biased. The following are a few examples:

* He makes the claim that economists have concluded that FDR's policies needlessly prolonged the Great Depression but then doesn't back it up at all. I was actually quite curious to hear the reasoning behind this conclusion, but it was never given.

* He notes that financial markets raised the price of Brazilian debt after the leftwing Luis Inacio Lula da Silva was elected president, implying that a leftist presidency was bound to be an economic disaster (the book was published in 2004). In fact, Lula presided over huge growth, and Brazil has since become a major player in the world economy.

* He argues that private companies run utilities better than the public sector and gives the example of Argentina as a place where private provision of water was a great success. He does not mention Bolivia, where a private consortium took over water provision, hugely jacked up prices, and caused a widespread public revolt known as "the water war."

* He blames the California electricity crisis on the policies of state government without mentioning Enron's manipulation of the energy market.

* He calls into question whether "dumping" can be proved to exist. He cites some examples where it is hard to prove (if I remember correctly, all were in the context of developing nations dumping products on first world markets), but he does not mention the sale of subsidized American agricultural products in Latin American markets, which is widely viewed as dumping. He rails against agricultural subsidies in other parts of the book, so it seems hard to deny that these products are sold below cost.

Overall, I thought it was a very interesting and well-written book that provides a good primer of mainstream economic thought. It was written before the 2008 crisis, so I'm curious whether any of his thinking has changed since then. At the same time, I'm glad I'm also reading Ha-Joon Chang's book because this one seems oversimplified: examples that don't support his overall thesis are glossed over or ignored.

Very good book. Easy to listen to.
Sowell brings clarity to a subject that is usually poorly understood by most people. The book will take the reader to a different level of comprehension of economics and dispel many well entrenched myths. Should be mandatory reading to anyone in positions of management.

A great introduction to economics

To a beginner, it's a great introductory book to economics. It's full of real-life examples with companies that are well-known and they make the theories easy to understand.

A long-time fan of Dr. Sowell's articles, I greatly enjoyed the way he presents economics principles in such a practical and understandable way. Subjects like commodities markets and the federal reserve that seemed beyond the realm of understanding for mere mortals become almost simple to grasp as the basic principles are presented in a logical and uncomplicated fashion. Wish it was required reading for more public officials, espcially senators running for president who confess not knowing much about the economy.

Professor Sowell presents a first-class coverage of economics and why it is important for all members of society to have a core understanding of economic principals.

This book is simply a revelation about local, national, and global economics. It challenged many of my beliefs and long held assumptions. I agree with a previous reviewer; this book should be required reading in every high school.

Excellent overview of economics accessible to anybody, clearly explains why individualism and a free market economy are the foundations of a prosperous society and what happens when you mess with it.

This book should be required reading in every high school in the country. It explains very simply why a market economy is the most efficient and thus delivers the highest standard of living for its participants. It points out where much that passes as common knowledge is wrong and why. Even those of us in the business world start to believe some of the common statements in the media about economics as we all here them day in and day out. It was nice to feel grounded again to be reminded how and why the system works and what happens when government tries to circumvent the market. Read it then give it to your kids.

This book is neither an introduction to basic economics or, particularly, a citizen's guide. Summarizing in one sentence what he considers economics to be: 'the study of the use of scarce resources', (not his own phrase incidentally) Sowell spends no more time in discussing economics per se but engages in political polemic, contrasting USSR (the only viable - although failed - alternative to laissez-faire capitalism apparently) with an idealised version of US prosperity.
I was hoping to listen to a book discussing the science of economics or a discussion of the ideas and algorithms that make up the discipline and perhaps an overview of common economic terms, that might illuminate the financial news, discussions of the stock market or the Chancellor's Budget Speech. Instead I was clobbered with partisan politics.

There are certainly uses for this text but if you're considering listening to it as an introductory text-book of some sort, there are better suited items on this service. I might recommend Mark Skousen's 'The Big Three in Economics', which discusses Adam Smith, Karl Marx and John Maynard Keynes in some considerable biographical detail but also engages with their economic theories.

I haven't read the Wealth of Nations - but this book has reminded me i must.

I have listened 3 times and will review until i can remember it all.

Unfortunately I would like to hear more balance on the Theory. The book gives all the upsides of free market theory, but doesn't deal with the problems - war, fraud addiction, pity and abuse.

These fundamentals which create many of the 'Problem' policies, which the book discredits need not be so easily dismissed.

I expected this to give a broad overview of general economic theories such as Keynesian and Monetarist ideas, perhaps the role of interest rates and so on. Instead you get an extremely dull US/USSR focussed book with startling insights such as not only do businesses have to watch their income, they must also watch their expenditure. Also, I have never known a book labour simple points so much - 15 minutes talking about New York rent controls to illustrate the role of prices and then another 10 making the same point with other equally banal examples. Avoid.

Reveals the hidden truths of the world

As an Economics Lecturer I am very happy to recommend this book. It has an American flavor but the principles apply equally across the pond. The listening is easy and interesting and I recommend this book to all of my classes. For Economic analysis and formula you need to look elsewhere though. Happy listening.

Reveals the hidden truths of the world

As an Economics Lecturer I am very happy to recommend this book. It has an American flavor but the principles apply equally across the pond. The listening is easy and interesting and I recommend this book to all of my classes. For Economic analysis and formula you need to look elsewhere though. Happy listening.

I found the narrator boring and irritating at times. The content was reasonably good but I feel that it was poorly structured.