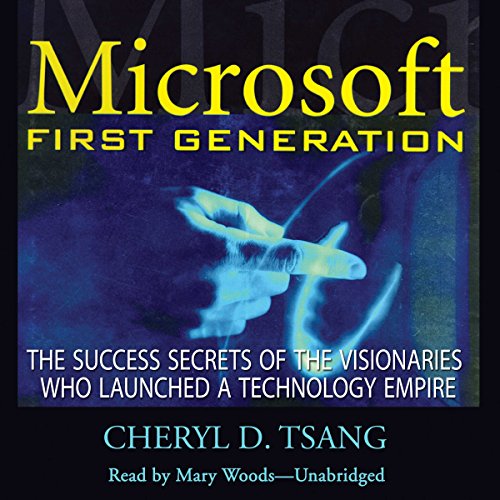 This story has all the ingredients of a modern legend, representing nothing less than the proverbial American Dream - writ extra-large. It is a story of hard work and brilliance, of extraordinary commitment and overwhelming desire. And these are the story's original cast members, who could not possibly have foreseen the epic, unprecedented success that awaited them. After all, the technology empire which these 12 visionaries helped to foster under a man named Bill Gates has all but single-handedly defined our Age of Information - and changed the world forever.

What began as a modest start-up partnership only 25 years ago has already surpassed all the giants of contemporary capitalism, including General Electric and IBM, and has achieved a market value estimated at nearly $500 billion. How did Microsoft achieve all of this in so short a time? What was the true nature of the Microsoft environment in the beginning, and what are the secrets behind its triumph?

Meet the early builders of Microsoft and step inside the famous culture of loyalty, the storied "maniacal work ethic," and the hardcore world of reckless risk-taking that remains so integral to the computer giant's matchless and ongoing success.

It is such a shame. Imagine a party where everyone is telling the best reditions (often exaggerated) of their life choices and career path. These party goes will be slapping each other on the back for their good judgement, their luck, their brilliance. They are unlikely to tell the truth such that you would ever use the story as a basis for your own decision making. The story is also unlikely to provide access into what actually happened so that you get a sense of being there or give lessons to repeat it. Record these stories at your next party. Transcribe them. Publish as a book.

This is an entertaining and interesting book. These are obvioulsy smart and hard-working people, and rightly stand as an inspiration to us.

The reader should keep in mind, however, that much of Microsoft's success is also due to ruthless and predatory tactics.

Some interesting history but...

Originally published in 1999 during the dot-com boom, some parts of this book are a bit dated. Written as a series of mini-biographies and interviews of a group of early Microsoft employees, it does contain some interesting historical insights to Microsoft but the stories are mostly bland and repetitive. The "maniacal work ethic" theme became especially grating after chapter 5. The narration was well-paced and clear but somewhat monotone. Overall, this book pales in comparison to similar works such as iWoz and iCon.

Stay away from this book. Audible... You should offer a refund to anyone who payed for this sad excuse for a book.

This book contains short bios of 12 people who were one of the first people to work for Microsoft. A hard-copy is hard to find, but the audio book version is still available. It's fun to hear the stories and anecdotes of these people, but that's just about it really. The narrator read in a monotone manner with an annoying sounding voice. Like a computer generate voice with some intonation. The book does not reveal much about Microsoft as a company. It just tells some stories about life at Microsoft as an employee at that time.

Story was very interesting, good style of writing. However the narration was a bit unpleasant to the ears. Still a great book for the Microsoft fan.

Great voice for a Spanish spoken

I speak spanish and use audible to learn english with my favorite computer tech books so i understand very well this audiobook, and enjoy, because i have some audibles i cant understand at the first listening

so i hope good choice of narrators

I'm sure the book would have been a great listen, however, I was instantly put off purchasing the book when all I heard in the sample audio was a list of credits to the book's architects.

Yes I do believe you should give due credit but I'm not prepared to make a purchase on the strength of that alone.

Give me a sample of the book's content as well so I can make an informed decision.

On a positive note, the theme of the book sounded very interesting which is why I listend to the sample in the first place.

I hope the publishers read my note and take further steps to convince me the this book is going to be a great listen - please!